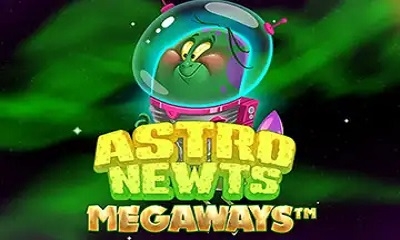 The Astro Newts Megaways video slot brings players into outer space for a weird but fun adventure. This title centers around gameplay with a ton of features. However, there are thousands of ways to win on every spin with the Megaways format as well.

An Introduction to Astro Newts Megaways

We love seeing games that step out of the box with their theme and concept. That’s exactly what we got from Iron Dog Studio’s Astro Newts Megaways online slot. This title is a lot of fun largely in part because of the theme being so atypical and lighthearted.

With that said, the gameplay and graphics are both very strong and pull the whole thing together.

From a visual standpoint, it’s hard to deny that this game is solid but different. The theme of going to outer space as a bunch of newts is definitely something we wouldn’t have thought of. However, they were able to really make it work from a visual standpoint. We think that’s impressive in and of itself.

Additionally, the gameplay is strong as well. Players are able to get tons of ways to win on each spin. That’s on top of a plethora of different types of features that also add value. There’s a significant variety of features as well, and some hit often while others hit less often. That’s a fun type of mix that leads to a very solid gameplay style that players love.

When you very first see this game, you’ll know that it uses the Megaways format. However, games with that format can still vary a bit with the particulars. To help solve that, we’re going to break down everything you can expect in the following.

What players will want to know about this game is that your wins are a multiple of your total bet size. You don’t have to mess around with coin sizes per line or way to win or anything like that.

Also, it’s important to point out that this game has a medium overall volatility. That helps to keep things balanced between the generous pay table and the generous feature set. The hit-rate is still relatively high, however, because of the Megaways format.

As we’ve mentioned above, the gameplay for the Astro News Megaways online slot is largely feature-based. With so many features, it can be tricky to keep up with what’s available when you first start. To this end, we’re going to break down everything you need to know in what follows.

The most common feature to activate in this game is the tumble feature. This is because it activates after each and every regular win. The idea is common in that the winning symbols disappear. That allows new symbols to fall down into place.

What makes it special in this case is that you get an increased chance of wild symbols to fall down. That helps to give you more opportunities to win that you wouldn’t have necessarily picked up otherwise.

The wild symbols in this title appear on every reel but the first. On the second, third, fourth, fifth and sixth reels, you can get wilds in both the regular game and the free spins mode, which is important because they are worth a lot in the Megaways format. You’ll get extra wins you missed out on otherwise with these symbols.

There are actually two types of wilds. The red/orange one with a rocket shooting off is the normal one. The purple wild, however, is actually an expanding wild. It will grow vertically to cover the entire reel with wilds. Note that if it covers up a special or scatter symbol, that symbol will still count.

Instead, you’ll have Super Alien Fuel. This shows up during free spins, and you can also get up to three total. They add two spots to the fuel tank while also adding an extra free spin.

Pig on the Moon

This guy helps to simply give you better wins in the Astro Newts video slot. You’ll be able to get up to two extra expanding wilds with his help. He can also add as many as four additional regular wilds to the game board. He’s very helpful in this way, and you’ll have better chances for wins thanks to his assistance.

If you get a win with a symbol of two or three positions on the reel, it’ll split into two on a win. This basically increases the ways to win for all intents and purposes. There’s no limit to the number of symbols that can do this in a regular spin or tumble. However, it can only happen one time per individual symbol.

When the fuel tank is maxed out at six spots, you’re given eight free spins. From there, you’ll collect more fuel to go to other planets. This opens up some of the other features if you’re able to do it. Additionally, you’ll get a multiplier increase for every tumble while in the free spins mode.

How to Win at Astro Newts Megaways

With a medium volatility, the best strategy for your betting here is simply. All you have to do is pick a bet size you’re comfortable with. This will usually be around the average of what you’re typically comfortable with in other slots in general. However, the whole thing to remember is that the swings will come to a degree, but on average, they will not be very severe.

For the mid-tier symbols, there are three. The red rocket symbol earns you 20x for six of a kind. You’re also able to earn 10x for six of the blue space gun or the green asteroid.

From there, the low-paying symbols are all based on card ranks. These come in two tiers themselves. The first is the yellow A and red K, which pay 5x for six of a kind. Things drop just slightly to 4x for six of a kind combinations of the purple Q, blue J or green 10 symbols.

The fun is only boosted by the awesome degree to which the visual appeal fits the slot’s driving concept. The pay rate of the selection of features in this game is so substantial that slot fans will certainly not get bored of playing, and the driving concept is utilized in a really intelligent way in this video slot, which is opposed to it just being a non-critical detail like what we see in a lot titles.

As a part of this company’s offering of games overall, this is a game that fills a key position since it has appeal to a whole lot of people. We also want to point out that if action is the thing you’re after, then you’ll absolutely enjoy the style of gameplay that this video slot gives to your sessions.