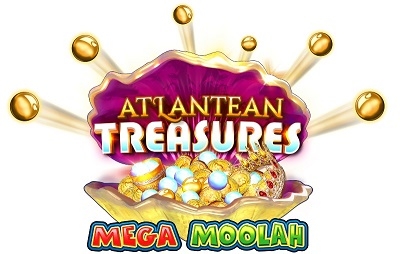 The Atlantean Treasures Mega Moolah online slot by Microgaming offers players a chances to win a minimum payout of seven figures on any given spin regardless of the bet size used on top of re-spins, expanding wilds and other fun features that add a whole lot of action.

The stories that surround the fictional underwater city of Atlantis have been the subject of all kinds of different movies, books, television series, video games and other forms of media. For whatever reason, we seem to be hooked on the idea of this secret, undiscovered, deep sea civilization.

Microgaming’s Atlantean Treasures Mega Moolah video slot plays on this fascination we have with this city at the bottom of the sea.

As such, the visuals are pretty tremendous and have bubble-based, transparent reels that allow you to see the cool underwater ruins of the city. On top of that, the symbol themselves are done really well also.

Action is the name of the game when it comes to the overall style of play. While players will definitely be shooting for that top jackpot, they will also have plenty of other ways to get paid. With a variety of bet sizes available at all levels of stakes, you can get in on this high level of action no matter what sizes of wagers you’re comfortable with.

The layout for this game is actually really easy to just jump right into. In what follows, we’ll break down what you need to know about the format and betting for this slot:

Since this is a game with a seven-figure (sometimes eight-figure) top progressive jackpot, the fact of the matter is that it’s going to have a pretty high volatility. There’s not a lot that can be done to change that. However, the feature set still offers a reasonable hit-rate, so it still gives you some small and medium wins to help ride things out as you shoot for the largest prizes.

The feature set here in the Atlantean Treasures Mega Moolah online slot is all about getting extra chances to win. That’s an ongoing theme in the overall way the gameplay is handled here, and we’ll show you what you need to know about these features before you hop in to play.

There’s a mermaid with purple hair and a long necklace, and she’s the wild symbol in this slot. She’ll make appearances on the second, third and fourth reels only. Since she only appears on these three reels, she does not get her own winning combinations by herself.

With that said, she does do something cool that increases your chances of winning even further. She always expands to cover the entire reel up and down vertically any time she shows up on the game board. This means that you’re always getting wilds in a vertical set of three no matter which position she lands on.

These expanding wilds are a great value because they increase your chances of winning in general but also boost your opportunities for those multi-line wins and wins that pay in both directions that run up several prizes on the same turn.

Any time that you get a wild on the reels, which subsequently expands to cover its reel, you’ll also be granted the re-spin feature. Since all you need is at least one wild to trigger this, it’s a feature that hits fairly often during your sessions.

The way this re-spin works is pretty simple and intuitive. Wild reels are locked into place after your regular wins are paid for your original spin, and all other reels will spin once again at no cost to give you additional opportunities to get paid.

What’s really cool is that getting more wilds on your re-spin leads to more re-spins, and all of the wilds will lock into place, so it’s possible to get a situation with all three middle reels locked as wild, which means a lot of guaranteed wins of at least four of a kind in both directions.

The Atlantean Treasures Mega Moolah video slot is tied into the Mega Moolah jackpot link that offers four different progressives. You can get a golden bubble on any position on the reels that’s not wild, and the more that you collect, the chances of triggering a progressive wheel feature is increased.

In essence, you’re getting a random chance to win on every spin regardless of which regular symbols appear on the game board, but your chances of winning increase in proportion to your overall bet size to keep things fair.

The four progressives seed at the following values:

When you trigger the progressive jackpot wheel feature, you’re guaranteed to pick up one of these jackpots. Note also that the smaller jackpots hit more often than the larger ones.

How to Win at Atlantean Treasures Mega Moolah

Most people play this game because they’re shooting for the progressives, and that’s a big part of the overall approach that players should take with this game. Since the volatility is so high, you should drop your bet size down a bit to compensate, and something in the range of 50 to 75 percent of your normal average bet size is probably sufficient.

This will help to keep you in the game longer without a serious swing wiping out a significant portion of your balance. However, you’ll still have fair chances to win the progressive regardless of the bet size you choose, so it’s a win-win situation.

The payout structure here is actually fairly balanced for the non-progressive titles, which isn’t something you always see in games in this genre. You’ll notice that the theme of the symbols is a combination of old style symbols from classic slots and underwater creatures.

The bar symbol pays 25x for five of a kind. Five of the lucky blue seven, colored to look like it’s underwater with bubbles and everything, earns 12x.

The visual appeal of Atlantean Treasures Mega Moolah is top-tier and enhances the overall play style, and the feature set incorporates plenty of different additional ways to win alongside the regular pay table offering. This video slot is a fitting component of this software developer’s overall portfolio because of its graphics level and play style.

Everything is focused on action with this video slot, and that is tremendous for players who would rather have an action-packed type of gameplay. In addition to that, if you’ve been a fan of other online slots that center around this style of underwater theme, or if you just like big jackpots, then this is one game you definitely will not want to miss.