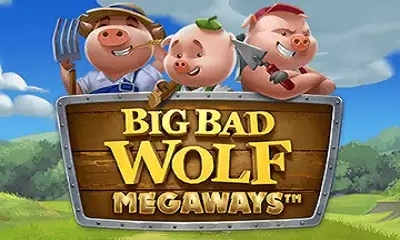 With the Big Bad Wolf Megaways online slot, Quickspin brings the fairy tale to life in a new way. This title has top-tier graphics on the level that we have come to expect from this developer. Additionally, you get thousands of ways to win on each spin and special alternating wilds.

The story of the three little pigs is a classic fairy tale told all over the world in various iterations. Quickspin has brought this story to the reels with their Big Bad Wolf Megaways video slot. Everything has been handled in an excellent way that combines a fun theme with an excellent presentation and gameplay style.

It’s easy to see how this game could have been boring just based on the theme. However, Quickspin did not allow that to happen.

The look and feel of the game is really cool. It’s definitely up there with some of the best-looking graphics we’ve seen in this style. It uses a very clean style of animation that fits the fairy tale concept perfectly. Along with that, each of the characters are handled in a way that really bring out their personalities.

That leads us to the gameplay side of things, which is absolutely outstanding. It’s really awesome to see such a high level of play on a fairy tale-based game. The Megaways format starts things off with a lot of ways to get paid on each turn. However, this is made even more exciting by a feature set that takes advantage of the format and theme. As a result, everything gets tied together in a fun way.

While it’s pretty easy to hop in and get started playing this game, the format can be intimidating. We assure you that it’s nothing to be worried about. Additionally, we’ll break everything down for you here so that you know what to expect:

We like that Quickspin made the payouts really easy to understand and keep up with. You’ll have wins described based on what kind of multiple they are of your total wager. For example, with a €2 bet and a 30x win, your payout would be €60.

Additionally, the volatility of this game is what we would consider medium-low. That largely comes from the fact that the hit-rate of the regular pay table is quite a bit above-average. However, the features hit often enough that they don’t cause particularly bad swings. This all combines to create our volatility assessment.

The feature set is put together in the Big Bad Wolf Megaways online slot in a way that makes sense. This is because each aspect of the features ties into the overall theme. However, they’re also made to fit the format of the game as well. Combined, players get a pretty good level of immersion into what’s happening in this slot.

A cascade feature is used in this title. It’s a pretty simple version of it that just adds more wins than you would normally get. The way it works is that all wins are calculated in a winning spin before those winning symbols are removed from the game board. This creates blank spaces, and then those spaces are filled with new symbols.

Symbols fall downward from above until the entire game board is full once again. The horizontal reel at the top moves from right to left instead, however. Once the grid is full, you get another chance for wins. This process continues until no new wins are had, and there are no limits on how many cascades you can get.

As you can guess from the title of the game, the three little piggies make appearances on the reels. They’re normal paying symbols, but they have a twist. On every other cascade that they show up on the reels, they turn into wild symbols. This creates situations where you can end up with a lot of wilds on the game board at once.

However, it also means that you’re getting more wins more frequently. This is a way in which the features decrease the volatility of the slot as a whole. Additionally, it increases the hit-rate along similar lines. With several wilds spread across the reels, your opportunities for multi-line wins increase quite a bit as well.

In addition to the piggy wilds, you can also have regular wilds. This shows up as a golden toolbox, a reference to the piggies building their respective houses. What’s important to understand is that you can have wilds on every spin with this game. Moreover, all of the types of wilds work together in the same way.

The following payouts are available for wild combinations too:

However, if a set of wilds could be a part of a different combination that pays more, you’ll be given that instead.

The moon is the scattered bonus symbol in the Big Bad Wolf Megaways video slot. Three or more of them on the game board at the same time will award 11 free spins.

Note also that you have the ability to buy straight into this feature. Doing so will cost 90 times your total bet amount.

How to Win at Big Bad Wolf Megaways

With a medium-low volatility, the standard adjustment is to slightly increase your bet size. The idea with that is that you get better payouts while the swings are still reasonable. However, we also recommend using a lower bet size for your first few spins so that you can get used to the game, but it’s up to you on which you would like to do based on which option fits with your personal preferences.

Other than the wild, the wolf is the only symbol that pays for just two of a kind. However, you can earn 50x for six of a kind with it as well. The red pig gets you 6x for six, and that drops to 5x for six of the green. With the blue, the win is 4x for six, and six of the brick and mortar is worth 2.4x. Players also have the ability to pick up wins of 1.2x and 1x for six of the wood and hay, respectively.

The card rank symbols in this game look really nice and fit the theme perfectly with a wooden background. They pay from 0.50x to 0.40x for six of a kind combinations.

Due to the fact that this title brings a tremendous level of quality while still standing out as an individual game, this slot fits perfectly in this company’s portfolio as a whole. We also want to point out that when compared to other online slots that utilize related themes, this game is different in a number of areas compared to just being one of the sub-genre.

A variety of extra features are used in this title, which is a fact we can’t assume for plenty of the competition, and the gameplay experience for this game brings a ton of action. On top of that, the excitement is absolutely raised up by the overwhelming level to which the aesthetic appeal fits the slot’s theme.

What is the Return to Player (RTP) for Big Bad Wolf Megaways?