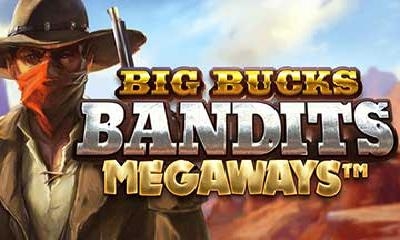 The Big Bucks Bandits Megaways online slot by ReelPlay brings players out into the desert mesas of the Southwestern United States for a throwback experience with cowboys and bandits. With thousands of ways to win on each spin and a ton of features, this is an action-packed title that a lot of people will find appealing.

The look of the Big Bucks Bandits Megaways video slot, a title produced by ReelPlay, is very striking when you first open the game. You’ll notice that the format is very large, and there are jackpots listed beside of the reels. The grit and visual style play a big part in first impressions, and the first impression you’ll get from this title is that it’s got a lot of action waiting to be had.

With that said, the first impression isn’t all that matters with this game because it delivers on depth as well.

Despite looking great, this is not a title that has style without substance. The gameplay experience for players is tremendous with a high hit-rate, lots of features and a format that encourages a ton of action. With a throwback cowboys and bandits theme, it is placed into a bit of a sub-genre, but it stands out so much that it really stands on its own.

The layout is obviously something to note when you’re playing a slot with the Megaways format. Here’s what to expect:

With so many ways to get paid, the hit-rate is obviously going to be pretty high. However, because the pay table is so top-heavy and because the features pack so much value, that drags the volatility more up toward a medium level instead of being lower based on the hit-rate alone.

With a game like the Big Bucks Bandits Megaways online slot that has so much action on such a large format, there are a lot of features to be aware of. We’ll show you what you need to know here so that you go into your sessions with a full understanding of what can come your way.

The sheriff’s badge is the wild symbol, and it can appear in the middle four reels only. This is because the wild only shows up in the upper extra reel that runs across the top of the second, third, fourth and fifth vertical reels.

That means that the number of times you’re going to hit a wild is somewhat limited, but that’s made up for the fact of how effective it is. With the Megaways format, especially when you add in the extra reel up top, there are thousands of ways to get paid on every turn. As a result, the wilds can help you in a disproportionately high number of ways compared to how they may be seen on the average game.

You’ll notice that there are four jackpots listed on the upper left-hand side of the game board when you start playing. These are based on multiples of your total wager, and they pay out as follows:

These jackpots are a key part of the main bonus feature of the Big Bucks Bandits video slot that we’ll look at below.

The golden moneybags symbol is used to trigger the bonus feature for this game, which is called the Jackpots Re-spins Bank Heist mode. When you get at least six of the scatters on the game board at once, you will be given three re-spins.

These re-spins work by holding scatters in place and spinning every other symbol on the game board.

If you get another scatter, it becomes held in place as well, and your number of re-spins starts over at a total of three. If you go three re-spins without getting an extra scatter, the number of total money bags is added together.

From here, you’ll go to the Double Cross Gamble Feature. The idea is that you can gamble with your scatters to try to earn more payouts. This is completely optional, but you can win up to five times the usual payout with this win.

You can be awarded one of the four jackpots, which are not progressive, during this feature. While the Platinum and Gold jackpots can only be won once during each re-spins bonus round, you can actually pick up the Silver or Bronze jackpots multiple times in the same feature, which adds more to the value as a whole. Note that other wins worth as much as 30 times your total bet can be won in addition to these jackpots during this feature.

How to Win at Big Bucks Bandits Megaways

The two things that inform your betting strategy for this game are the volatility and the hit-rate. The hit-rate is pretty good thanks to the Megaways format being used, so you can expect a lot of small and medium wins.

However, because of the top-heavy nature of the pay table as a whole, particularly because of the jackpots re-spins feature and the huge wins it can give you, the overall volatility is closer to the medium range. As such, there’s not much of a betting adjustment to make here. Your best play will come from simply choosing an available bet size near the middle of the range of bets that you’re typically comfortable with.

The cowboy symbol is the top-paying symbol for this game, and he awards you 100x for six of a kind. It’s important to point out that you can also win a payout with this symbol for just two of a kind, and it’s the only symbol in the game that allows for this.

The rest of the pay table is based on common objects associated with the overall wild west theme. The two pistols get you 1.2x for six, and six of the boots pay out 1x. A win of 0.9x is yours for six of the cowboy hat, and six of a kind combinations of the cactus symbol will pay you 0.7x. Finally, you’ll earn 0.6x or 0.5x for six of the skull or the jug, respectively.

While there are plenty of games in the wild west type of genre in the slots industry, the Big Bucks Bandits Megaways online slot stands out from the crowd for two main reasons. First off, the look is up there with the best that the industry has to offer, and second, the gameplay is pretty strong as well.

The regular pay table for the normal game mode has a high enough hit-rate to keep things interesting, but the jackpots from the re-spins feature are what you’re obviously shooting for. In any case, it’s a balanced game with a whole lot of action and a theme that’s handled in a very aesthetically pleasing way.