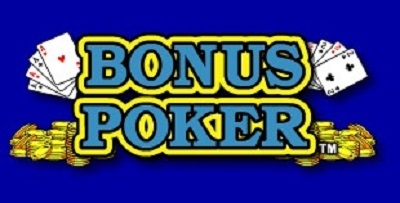 Bonus Poker Video Poker is frequently the best-paying option in an entire online (or land-based) casino, and it’s based around a set of special payouts for certain large hands. This creates a style of play that celebrates more chances for big wins, which is the kind of thing most players are after anyway.

If you look at the video poker selection at any online casino, you’ll normally see Jacks or Better and Deuces Wild first and foremost. Just behind that in popularity on the wild side of things is Joker Poker, and the equivalent that’s just behind Jacks or Better on the non-wild side is Bonus Poker.

With Bonus Poker Video Poker, you get a similar situation where there is a relationship to Jacks or Better, but it’s a very different game just like Joker Poker and Deuces Wild are quite different in a variety of ways.

The main thing to understand about this form of video poker is that some of the strategies are quite different from other forms of non-wild games in the genre. On top of that, the volatility is significantly higher than other titles because of how stacked the top of the pay table happens to be.

The Importance of Bonus Poker

Bonus Poker Video Poker has a very important place in the overall scheme of things when it comes to the portfolio of video poker games at any given casino. To have a balanced set of titles available, you need games with different levels of volatility within each sub-genre of games, and video poker is no different.

With Bonus Poker, you get a game that has a fairly high volatility compared to other non-wild titles. Usually if you want a higher volatility, you have to switch to a game that uses wild cards, but not everyone likes the style of play and higher level of strategic complication that comes along with that sort of thing.

That means that this game is very important to a non-trivial portion of the overall video poker audience who want an increase in volatility without having to deal with learning four or five times as much strategic material. That’s a pretty reasonable thing to want, and that’s the role that this game serves.

It’s also worth mentioning that this particular title can often be the best-paying game, or at least one of them, in the entire online casino depending on the pay tables for other video poker machines.

The rules of this game are in line with how other video poker titles are played, but if you aren’t familiar, then here’s what you need to know.

The number of coins that you play with here is actually really important, and you should always use five. This makes sure that you’re going to get the best payout rate available and the lowest house edge available compared to only betting between one and four.

There are a few different pay tables for Bonus Poker Video Poker, but there’s only one that you should play. It’s called the 8/5 table, named after the payouts for the full house and flush wins, and it’s listed in what follows.

When you have this pay table and correct play, your payout rate is 99.17 percent, which means you have a house advantage of about 0.83 percent. There are very few games available in any online casino that has a lower house edge than that, and most of them have much more complicated strategies that are a lot harder to learn.

To understand what makes Bonus Poker Video Poker important, you have to understand the overall video poker landscape. There are two major sides to the video poker spectrum: wild card and non-wild card games.

On the non-wild card side, there aren’t many titles with a high volatility. In fact, they have some of the lowest volatility available outside of the ones that happen to have progressive jackpots.

Bonus Poker does not typically have a progressive jackpot, and as a result, it’s one of the only non-wild card games that has a fairly high volatility. This means that your ability to hit jackpots and run up several big wins in a row happens to be higher than what you find in most other games. This is a gameplay style that sacrifices a percentage of small and medium wins to achieve this dynamic.

This style of play is also something that certain players absolutely prefer over everything else. In their minds, they’re interested in “going big or going home.”

The strategies for bonus poker are similar to Jacks or Better, but there are a number of exceptions that are worth learning that are created because of the top-heavy pay table and the lower payout for a flush at 5x instead of the more common 6x.

The reason that Bonus Poker Video Poker has the level of popularity that it does, even in today’s modern era of online casinos, is that it’s packed full of opportunities to win bigger payouts than you would otherwise get in most video poker games, and the high payout rate for correct play doesn’t hurt the situation.

If you’re looking to expand past the usual Jacks or Better and Deuces Wild games that most people get started with, then Bonus Poker is the next logical choice on the non-wild side of things. It brings a lot of action with good chances to win larger payouts on average, but the volatility isn’t so high that it’s out of control like what you might find with a progressive jackpot game.