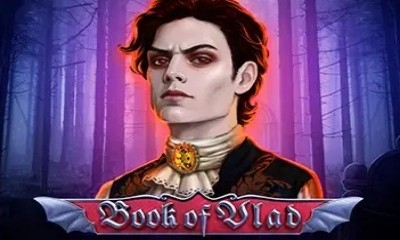 If a dark night in some spooky woods sounds like a good time to you, then you’ll love what the Book of Vlad online slot brings to the table. It’s all about the vampire-themed action. Free spins, combined wild scatters and strong payouts are the focus of this Gothic horror-styled title.

Casinos with Book of Vlad

An Introduction to the Book of Vlad Slot

Vampire-themed online slots aren’t exactly rare. Additionally, many of them like Dracula Awakening focus on the most famous vampire of them all. However, Endorphina made the Book of Vlad video slot a bit differently than most. The atypical elements that make up this title keep it from being “just another vampire game.”

Endorphina slots are known for breaking out of their respective sub-genres in this way.

The first thing you’ll notice is that bats fly past in the background on a regular interval. This makes the flowing fog and the dark night scene in the background even more visually effective. We love how this brings it all together and makes it come alive while you play. Additionally, it adds more to the look of the symbols that are actually on the reels, which all have a spooky Gothic design and flair to them.

On the gameplay side of things, Endorphina didn’t slack one bit. Some fun mechanics are included that increase your hit-rate substantially. Additionally, you get a strong free spins feature along with an atypical gamble feature that allows you to get an edge on the casino. All of this comes together to offer up a different type of experience than you’re probably used to.

This is a game with a really straightforward type of layout. It’s nowhere near as complicated as other vampire slots like Immortal Romance. However, it still offers enough possibilities for wins through the mechanics and features to stay really interesting.

Here’s what you’ll want to know before you jump into the game:

Despite the betting being set up around the amounts wagered per line, they didn’t base the wins off of this. Instead, wins are listed based on the actual currency amount you can win. Additionally, these values change and update on the pay table as you adjust your bet size. However, for the sake of reference and clarity, we’ll list them here as multiples of the overall wager. This allows you to understand what you can pick up in terms of payouts regardless of your bet size as a whole.

The issue of volatility in this game is actually really straightforward as well. Since the pay table is super balanced, and since the features are fairly smooth with the amount of value they give, it’s not really too out of the ordinary. We place it at around average despite Endorphina calling it “high” themselves. This is because they are basing it on their average release, which tends to have a lower volatility than what’s considered average in the rest of the industry.

Gameplay and Features for the Book of Vlad Video Slot

The feature set for the Book of Vlad online slot really fits the overall theme and concept of the game. This includes extra ways to win during the regular mode as well as a great bonus round. However, we have to strongly recommend paying close attention to how the gamble feature works. Most players will skip right over it, but that’s a mistake here. It actually becomes an integral part of the game that you’ll want to check after each win. With that said, let’s hop right in and see what all Endorphina packed into this title.

The book symbol, coming from the name of the game, is a wild symbol. It’s also tied for being the best-paying symbol in the entire game. Vlad himself is the other top-paying symbol. Each of these, along with a few other high-end symbols, pay for just two of a kind on a line. Here’s a look at the payline-based wins you can score with these books:

A key element of the gameplay style of this game is that half of the paying symbols only require two of a kind for a win. This increases the hit-rate quite a bit. Additionally, it smooths out the volatility quite a bit as well.

Aside from being a wild, the book symbol from the title of the Book of Vlad video slot is also a scatter. It pays out no matter where it appears on the board as long as three of them appear at once. What’s more is that these wins are in addition to any payline-based prizes. As such, you can run into situations where one set of books will pay in two different ways simultaneously.

In any event, the scatter prizes are as follows:

For example, if you picked up three scatters in a row on a payline along with another one on the fifth reel, you’d be given two different payouts. The first is for a three of a kind payline win, which is 10x (although it could be higher for a different four of a kind prize instead). Additionally, you’d pick up a 20x win for four of a kind as a scatter payout.

Three or more of the books will also activate a set of free spins. A random symbol is chosen to be given the capacity to expand during this feature. However, the wilds cannot be chosen, and they will not substitute for the sake of expansion. A blood drop can appear on any given symbol to fill an accumulator. That accumulated symbol is then added to the list of expanding symbols.

Note that each accumulated symbol that’s activated in this way adds two free spins to your total. Additionally, the expanding symbols cover their entire reels after regular payouts are awarded. This gives you even more opportunities to get paid since they award prizes no matter if they are on consecutive reels or not.

When you get a win of any kind, you’re given an opportunity to interact with the gamble feature. Many players will ignore this feature on auto-pilot since so many in the industry aren’t important. However, this one is different. You’ll actually hurt your RTP percentage if you skip it.

It works like this: One card is shown face-up with four face-down. You can pick from the four cards to try to pick one that’s higher to double your wager. Additionally, if you choose incorrectly, then you lose your winnings.

The trick here is that you can view the “up” card without being obligated to actually play the feature. As a result, you can choose to only pick a card when the “up” card is low enough to give you an advantage. This comes down to when it’s a 2, 3, 4 or 5. If it’s a 6, 7 or 8, then you’ll perfectly break even on your bet on average with this gamble feature. However, for a 9 or higher, the house has an edge.

How to Win at Book of Vlad

Another option is available to play this game with buying the feature. This gives seven free spins with expanding symbols for 93 times your total bet size. However, if you choose this option, we recommend dropping your bet size down before starting it. That’s because the volatility is much higher than playing the game normally.

With that said, if you play as usual, we recommend just picking a bet size you’re comfortable with and sticking to it. Since the volatility is pretty reasonable, the swings aren’t generally going to be severe. However, make sure to play the gamble feature when the card shown is a five or lower.

Payout Structure for the Book of Vlad Online Slot

The structure of the pay table in this game is similar to what we saw in the Blood Hunters slot. Nonetheless, Dracula pays 500x for five of a kind. The goblet and carriage can get you 200x or 75x for five of a kind, respectively. Similarly, another 75x win is yours for five of the gargoyle statues. All of these, along with the wilds, pay for just two of a kind.

The Book of Vlad slot is a great title that stands out from other vampire-inspired games. With that said, the combination wild and scatter provides a lot of the value. If that’s a game mechanic that you do not enjoy, then you should probably try a different type of slot since it’s such a core part of the overall play style.

Which online casinos have Book of Vlad?

What is the Return to Player (RTP) for Book of Vlad?