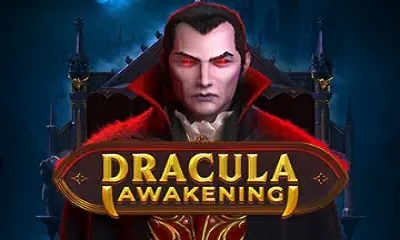 The Dracula Awakening online slot by Red Tiger Gaming takes players into a vampire-themed adventure. The dynamic between the day and the night is key to this title as it cycles back and forth. Each part of the cycle has different symbols and features available with different ways to win.

An Introduction to Dracula Awakening

One of the main things that a slot developer can do to make their games more interesting is pretty straightforward. They have to make sure that the theme and concept tie into the gameplay and features. If this is done well, the game is almost always super solid and entertaining.

This is what Red Tiger Gaming has done with their Dracula Awakening video slot.

The theme is about Dracula and his brides. However, some creative liberties have been taken with the brides. In the original story, he only had three of them, but in this game, they need enough symbol coverage for four reels. That aside, the presentation of this theme is at the upper tier of what’s available online. It’s definitely a top-shelf title when it comes to the visual and aesthetic appeal.

Even with all of that, however, we still think it’s the gameplay that stands out the most. That’s because this title takes the theme and really runs with it. Since Dracula has to act differently during the day than at night, this title cycles back and forth between the two. During each of these periods, you’ll have different things available to help you get payouts. Additionally, certain features are only available during each respective period. However, these periods cycle pretty quickly in terms of spins, so you won’t have to wait long for a change.

Despite the somewhat atypical gameplay, the format is actually super straightforward. Additionally, you won’t have to learn anything special to jump in and get started when it comes to the layout. Here’s what to expect:

Along with the simplicity in betting, the wins are described in a simple way also. All payouts are listed as a multiple of the total amount you’ve bet. This keeps paylines, coins per line and all of those other complications out of the conversation.

The volatility of this slot is in the medium range as well. Along these lines, it also has a very average hit-rate that’s super balanced. As a result, you’ll get a mix of wins at the small and medium levels primarily with the occasional larger prize on average.

With the Dracula Awakening online slot, the gameplay is a bit different than most games. A lot of this comes down to the cycle-based system. Because of this, we strongly recommend reading about how this game works before jumping in. Without that understanding, it can be a little confusing while figuring out how the game mechanics work.

The main gameplay mechanic in this title that dictates everything else is the cycle between day and night. These two phases determine which other features are available in the game as a whole.

To get the most out of this game, it’s pretty important to keep up with which phase you’re in. That will tell you which features you can trigger, which is an important piece of information.

Before we get into how these wilds appear, here are the payouts they can give you for wild combinations:

So the first thing to understand about the wilds is that Dracula always appears on the middle reel, and he is always wild. However, the bride symbols that appear otherwise are not normally wild. Instead, they become wild through a feature.

When it’s night time in this game, Dracula has a chance to turn into a super wild. This causes him to expand to cover the entire middle reel. When this happens, every bride symbol on the game board becomes wild as well. That’s how you get wilds on the first, second, fourth and fifth reels.

Additionally, Dracula cannot become a super wild during the day time phase. That’s an important piece of information because other features happen then instead.

An eclipse is really important to vampire mythology because it allows them to be out during the day without losing their power or being damaged by sunlight. Along these lines, eclipse symbols can appear during the day phase on the first, third and fifth reels. Get all three at once, and you will be rewarded with a set of seven free spins.

Dracula takes advantage of the eclipse during the free spins in a way that gives us the name of the Dracula Awakening video slot. He becomes a super wild that covers the middle reel for the entire duration of the feature. This means that his brides can show up and always turn wild during the free spins.

However, there’s a bit more to it than this. All of the wild brides will lock in place as well. They stay in their given positions for the remainder of the feature.

On top of that, each eclipse symbol that appears on the first or last reel will add one extra free spin. However, note that they cannot land on the middle reel during the feature. This is because it’s completely covered by the Dracula super wild.

How to Win at Dracula Awakening

With a medium volatility, you don’t really need to worry about any type of betting adjustment. Instead, the best thing to do is to just go with a bet size you’re comfortable with. Some players also like to start off on their first sessions with a smaller size as well. This gives them a period of time to get used to the game mechanics before they settle in.

One piece of advice we can give, however, is to play through to the end of the night phase. The eight night spins appear to have a slightly higher RTP percentage than the day spins. As a result, you’ll lose value if you don’t get them in after getting through the day.

Dracula only appears on the middle reel, so he doesn’t get his own winning combinations outside of the wild payouts. However, the non-wild brides score 300x for five of a kind. This is the best-paying regular symbol in this title. From there, the golden ring with a red gem on a purple background gets you 150x. You can also score 120x for five of the golden brooch. Additionally, the purple potion and silver goblet pay 90x and 75x for five of a kind, respectively.

Stylized card rank symbols in various colors make up the bottom tier of payouts. It starts with 60x for five of the red A and extends down to 12x for five of the blue 10. These payouts are pretty balanced overall and are a part of an overall balanced pay schedule.

Because the Dracula Awakening online slot gives a high level of quality while still standing out as an individual game, this video slot fits really well in Red Tiger Gaming’s selection of titles as a whole, and the driving concept put into play as the basis for this online slot is a great foundation for the style of gameplay and excitement. The presentation of this video slot is exceptional and drives up the whole gameplay experience.

A good number of extra features are used in this game, and that is something we can’t take for granted for much of the slots world overall. As if that wasn’t enough, if action is the thing you’re seeking out, then you’ll totally fall in love with the gameplay that this video slot gives to your play.

Which online casinos have Dracula Awakening?

What is the Return to Player (RTP) for Dracula Awakening?