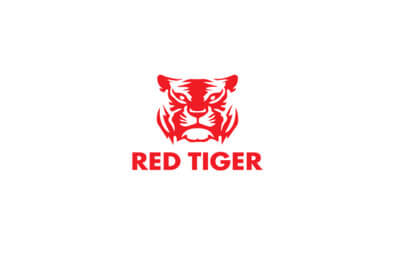 Experience isn’t everything; Red Tiger Gaming can be seen as something of a ‘new kid on the block’ on the online gaming scene, but in their relatively short time, have more than earned themselves a place on the market’s top table – that is down to the thrill and engagement that online casino players enjoy from their games. Red Tiger Gaming’s games can be found on online casino platforms around the world, and the software offers reliability and consistency that has made them a firm favourite among various internet gambling hubs. They are based in the Isle of Man, and the online casinos which use their games have licences all over the world. Learn about Red Tiger Gaming casinos and find the top casino sites that use it.

Red Tiger Gaming offers players all the advantages of games developed with the latest software, combined with optimal gameplay. Their games work on a wide variety of platforms – from PCs and tablets to different types of smartphones. What makes Red Tiger Gaming distinctive? It might be the lovable graphics which make their games so easy on the eye. In just a short time, Red Tiger Gaming has proven to be one of the leading online casino game providers out there.

Why Play at a Red Tiger Gaming Casino?

If you are a slot fan, it seems likely that you will also be a fan of Red Tiger Gaming’s portfolio. That’s because they are big on slots, and understand exactly how to design entertaining titles, deliver attractive themes, moreish game features and intelligently structured payouts.

So which kind of games do Red Tiger Gaming specialise in? Well, the company is undoubtedly a slot specialist, and an overwhelming share of their games are slot titles. They do also make a small number of other games, which are classic casino games such as baccarat, blackjack or roulette. While there are plenty of similarities between Red Tiger Gaming titles, they all have their own unique traits.

If you are a fan of bonuses, Red Tiger Gaming can keep you on the edge of your seat. That’s because there are heaps of bonus mechanisms in play with each slot. You can expect multiple bonus games in each title you play, offering in-game advantages to players. There are also events which are randomly triggered, keeping the tension high throughout the game – as you never know what is going to pop up next!

Wild Spartans has the best Return to Player (RTP) ratio of the Red Tiger Gaming titles with 96.43 percent. That is followed by Chinese treasures (96.31 percent) and Dragon’s Luck (96.29 percent).

Now let’s look a little closer at the titles in the Red Tiger Gaming portfolio.

As the name suggests, this slot has a Christmas theme, but it doesn’t need to be the festive season for you to enjoy it! There are randomly triggered features galore, with wilds, a 20x multiplier, lower value symbols remove, and a giant 3×3 wild. You can also use the Free Spins feature for up to 20 free spins, with the potential of winning more free spins along with the randomly triggered features. And don’t forget about Santa’s Bonus, in which you can win an incredible 800 times the value of your stake.

This title is all about magic and mystique. You could describe this slot as unpredictable, but the pay table is very high. Expect up to 800 coins for the highest paying symbol on this slot with 40 fixed pay lines and five reels. Among the standout features area are Lucky Nude, Lucky Reels and Lucky Swap.

You only need 20p to begin to play this slot, which has 20 pay lines and five reels. The theme takes inspiration from a character in the Shrek movie, and you can look forward to four mini-features including symbol transformations, five of a kind wins, symbol swaps and reel swaps. As you progress in the game, you can also win more free spins.

This is one of Red Tiger Gaming’s most well-known titles. It is based on the famous trio of French soldiers, and features 40 pay lines with five reels. Perhaps the biggest tempter for online casino players is that you can win all the way up to 2,000 times the value of your stake. The Three Musketeers account for the bonuses on offer, with Athos representing the ‘offer’ bonus, Porthos the ‘bar’ bonus and Aramis the ‘wheel of fortune’ bonus.

If you like your free spins, Rainbow Jackpots can be the title for you. It features up to 100 free spins with its Mega Free Spins upgrades. This slot has 20 pay lines and five reels, and there is a Beer Bonus feature which gives you the chance to win up to 100 times your stake, not to mention a Triple Beer Bonus that presents the possibility of being upgraded to 1,000 times your stake’s value.

This slot is noted for its volatility, and players might be tempted to choose it because of its high pay table. The highest symbol can be worth up to 1,380 coins after it appears five times. There are five reels and ten pay lines on this slot. Mega Fortune, Dragon’s Help and Mega Coin are among the special features. Mega Fortune carries the immense possibility of paying out as much as 1,380 times your original stake.

There are features galore available on this title – from 20x multipliers to mega wilds, lower value symbol removal and a 3×3 wild, delivered by the Pumpkin Rider. And there is the chance to scoop up to 80 times your stake with the Full Moon bonus feature. Lucky Halloween includes 20 pay lines and five reels, and a total of six bonus features.

With a theme something akin to Tomb Raider, Golden Temple possesses plenty of bonus features, from reel respins to big instant wins, wild reels, nudges and reels swapping around. Just look for three bonus symbols on the screen.

This slot throws up special coins which can offer matching symbols, as well as a bonus round of free spins. You can play this slot – which features five reels and 10 pay lines – for 20p a spin up to £500 a spin. Keep a lookout for the infinitely evil 666 symbol which could land you a pocket of 200, 300 or even 1,380 coins.

This slot pays homage to the Egyptian Sun God and offers 40 pay lines with five reels. Players can become captivated due to the slick feel of the title, and extras such as high-value symbols only, a wheels bonus and wilds. You can play from just 20p a spin, and the prizes go all the way up to 1,000 times the value of the stake. Should you land the Mighty Ra, which is the wild in RA’s Legend, you could land a big scoop of 120, 600 or 1,200 coins.

The classic blackjack game offered by Red Tiger Gaming is recognised for the excellent performance, quality and speed which it offers online casinos, and that is in part thanks to high frame-per-second (FPS) rates. The features of the Red Tiger Gaming version of this casino classic include rules such as eight decks, dealer stands on soft 17, three betting spots, cards shuffled following every hand, surrender is not allowed, double only on 9 to 11, no re-splitting, and double after split is allowed.

This top-paying table game benefits from a gaming experience which is seamless, and impressive FPS rates. As with its other table games, Red Tiger Gaming has made European roulette compatible across a broad variety of platforms – from PC to mobile devices. The speed of the game is also down to the RTG Core architecture used by Red Tiger Gaming in the development. You can count on this game for a wide variety of available stakes and betting options, as well as the choice between a traditional roulette table and a ‘race track style’ table which offers a clearer view of the wheel’s numbers. You can bet on the respective sectors more easily thanks to betting options such as Tiers, Voisons and Jeu 0 – it all adds up to a way to make bets in a speedier fashion!

As with the table games detailed above, with baccarat from Red Tiger Gaming you can expect the same RTG Core architecture and fast FPS rates. Their baccarat game has won plaudits for its classy look and feel. Players should note that the game employs six decks of cards. It also includes a full scoreboard that you might expect to see in a physical game. Red Tiger Gaming’s baccarat uses the normal baccarat rules which involve betting on the outcome of each round. With this Punto Banco version, the player’s predominant decision is what to bet on.

Red Tiger Gaming was founded in 2014 by a group of professionals with substantial knowledge and experience in the online gaming world. The company has benefited from the know-how of this team and its resume of Red Tiger Gaming casinos development projects around the globe. The company employs a wide range of different specialists in order to produce its titles – these range from software developers to produce the games themselves, to mathematicians who can work on the odds, graphic designers that get the games looking right, and audio engineers who can tweak the sound to bring the games to life. That’s in addition to the teams who look after the business side of the organisation. The amazing design of the Red Tiger Gaming office represents their emphasis on fun and friendliness.

Red Tiger Gaming is governed by a variety of regulators, depending on the jurisdiction which they operate in. These include the UK Gambling Commission in the UK, the Malta Gambling Authority in Malta, and the Alderney Gambling Control Commission in Alderney. Red Tiger Gaming isn’t just valued for their games, they also offer their partners the benefit of both maintenance and support on an around-the-clock basis.

Is Red Tiger Gaming only a video slot developer?

No. While Red Tiger Gaming is well-known for its large selection of slot titles, it also offers online versions of classic casino games such as baccarat, blackjack and European roulette.

What kind of features is Red Tiger Gaming known for?

While not many of its games might feature bonus games within them, there are plenty of bonus features and randomly triggered events to feast on, keeping players engaged from the moment they log in to their Red Tiger Gaming casinos platform.

Which Red Tiger Gaming titles should I play?

Everyone will have their own favourites depending on the theming, game play, and their own luck! Some of the most popular titles include Dragon’s Luck, Lucky Wizard, Three Musketeers and RA’s Legend. Among the newest games they have released is Thor’s Lightning and Spin Town.

What are the rules for Red Tiger Gaming’s classic casino games?

You should check the specific rules for each classic casino game before you play it. While some games can use traditional rules, others may use rules which differ.

I’m not sure which game to place a stake on. Can I try them all for free?

On the whole, yes. Red Tiger Gaming offers many of its slots and traditional table games as free demos which can allow you to get a feel for them, and learn the ropes. In general, it is just the progressive slots which are unavailable as free demos, and this is due to the nature of the progressive feature.

What is the best Red Tiger Gaming casino?