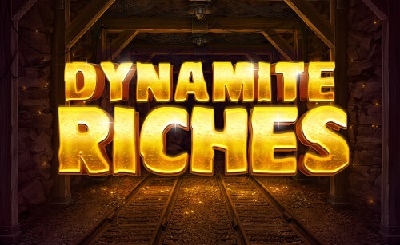 The Dynamite Riches online slot is a game by Red Tiger Gaming that offers an underground mining theme with a progress-based style of gameplay. You can unlock new features as you go, and those features are particularly valuable, which means you get better chances of winning the longer you play.

An Introduction to Dynamite Riches

There have been a number of mining- and gem-themed online slots in the industry for decades. However, Red Tiger Gaming knows how to enter a crowded sub-genre and still stand out, and that’s what they did with the Dynamite Riches video slot.

This game is visually solid with great graphics and animations, but it’s the gameplay style and their approach to handling features unlocking that really make this title different.

The aesthetics of this slot are more than sufficient. The gem-based card suit symbols in particular stand out for looking tremendous, but the background and other symbols are also easy on the eyes to say the least.

With the feature set and gameplay, they’ve done some things differently here than what we usually see, and that’s put this title in a position to give players a much different kind of experience than what you normally get with a video slot.

The key thing to understand about this game’s format is that there is a lot more visual real estate on the game’s grid per payline than what you normally get. It doesn’t hurt the gameplay, but it’s something to keep in mind.

Here’s what you can expect:

The volatility of this game is in a pretty reasonable medium range, and the hit-rate is solid without being too high or too low. In this sense, it’s a very balanced title that Red Tiger Gaming has put together here and will appeal to players who prefer lots of different styles of gameplay.

The majority of the experience of this title centers around a set of symbols that you collect to unlock different random features. We’ll break down all of this below and show you everything that you need to know.

There are three different wild symbols: dynamite, diamonds and gold bars. They all interact in the same way to give you winning combinations you would have missed out on otherwise.

They also give you the following payouts for combinations of just wild symbols:

The wilds do not substitute for the scatter in this game, which is pretty standard, but otherwise, they pack a pretty tremendous amount of value.

You’ll proceed through the game trying to collect dynamite wild symbols as they decrease the fuse at the top of the screen to unlock different feature. Here is a quick summary of how you unlock these features, and they go in the following order:

Note that this counter for the number of dynamite wilds you collect resets at zero each time you unlock a feature, so you’ll need 13 for the Random Wilds, 21 for the Multiplier and 30 for the Mega Wilds feature in total. This is a cool way of giving players reasons to play this title in the long run since you unlock more content over time.

When you get this feature, you’ll find that every one of the low-tier symbols are removed from the reels.

This gives you better chances to win, but it also means that those wins will be worth more on average than your typical spins.

We like how this feature works because it’s an atypical way to give players value. It also adds a layer of excitement when it triggers that’s unlike anything else.

This feature is pretty straightforward: When it activates, random wilds are added to the reels to give you much better chances to hit winning combinations.

Considering the fact that these can combine with existing wilds to give you extra ways to get paid and wild combinations that pay out some of the best wins in the game, it’s obviously a strong feature even if it is a relatively simple concept.

At random, you’ll activate the multiplier feature. You’ll have all of your payouts on your next win multiplied by the value that comes up in this random multiplier, and that’s obviously a good value since it’s extra money for a win that you were going to get anyway.

Something worth noting is that if the free spins activate while a multiplier is active, it will apply to the very next win in the regular game mode and will not have any effect on the free turns.

Now this is a different way to get paid. There are wild symbols that are giant that take up 2×2 and 3×3 areas on the reels. These can obviously lead to some really massive payouts, and that makes this quite possibly the most valuable (and the last to unlock) of the four randomized features.

Three or more of the scattered bonus symbol will give you free turns. Here is how many free spins you’ll get:

You can also add more free spins (4, 5 or 6 for five, four or three of the bonus symbols, respectively) over and over again during this bonus round. Otherwise, there’s nothing special about this feature in terms of how the spins play out.

How to Win at Dynamite Riches

There is nothing special that you need to do to try to boost your chances of winning at this game in terms of setting numbers of paylines or anyting like that.

All you really need to make sure you do is to check that you have a bet size that you’ll want to play at over the long run because the features that have been unlocked are tied to each level of stakes, and that means you’ll want to keep playing at the same level as much as possible.

The card suit symbols are designed like different colors of gems, and they look tremendous. They’ll pay out 36x to 20x for five of each.

This is one of the most unique mining-based slots that we’ve ever seen in terms of the features and gameplay. There’s a lot going on in the Dynamite Riches video slot, and that contributes to a style of experience that you can’t really just go out and find anywhere else.