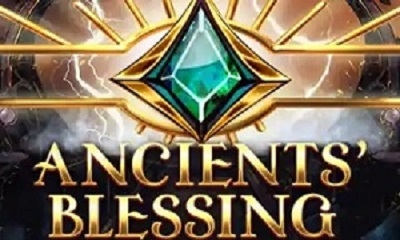 The Ancients Blessing online slot gives players an experience with lots of major figures through various mythologies. Cerberus, Medusa, a lion and a multi-headed dragon are all found on the reels. These ancient beings give players lots of ways to win with a variety of features.

An Introduction to Ancients Blessing

Players who like a lot of action will be fans of this game because that’s the whole idea here. Ancient beings from various points in various mythologies show up on the reels. Along with this, they give you ways to win beyond what’s on the regular pay table.

This creates a high level of action and excitement. It’s a concept that’s really unlike any other title we can remember seeing.

Red Tiger Gaming did a tremendous job making this game look great. It has a dark, foggy and almost solemn feel to it. That really captures the seriousness of the creatures involved. Dragons are found in stone around the reels to frame everything as well, and the symbol set is up there with the best that the industry has to offer in terms of aesthetics.

On the gameplay end, there is no shortage of features. What’s more is that they all make sense in the context of the concept of the game. That helps players to stay immersed in what they’re doing, and it makes the game really come together overall.

The layout for this game is a little different than what you might be used to. It’s not super outside of the box, but it’s not extremely common either. Here’s what to expect:

We want to point out that the volatility for this slot is in the medium-low range. Everything is otherwise set up to be pretty easy to jump right into. The only catch is that there aren’t that many 5×4 games that use 30 payline formats, so that can seem a little odd at first. However, the gameplay is pretty straightforward otherwise.

The gameplay of the Ancients Blessing video slot is largely about the feature set. While the regular pay table does offer some value, it’s not really the main focus all that much. That comes with a caveat that most symbols show up stacked in some capacity, so that makes getting multiple wins on the same spin a bit more likely, even for a 30-payline title.

Overall, the features work to enhance the regular pays more than they give their own wins.

If you get a winning combination of any of the ancient beasts, you’ll trigger this feature. When you activate the Locked Ancients feature, all of the ancient monsters will lock in place from your win. They stay there for the next spin. This can happen over and over if you pick up more matching symbols.

Adding to this is the fact that you get increasing multipliers for each additional spin they are locked in. This gives you extra value in two different ways, and it really adds to what the regular pay table brings. It’s also a feature that centers around the concept for the game, which adds to the immersion factor.

Note that the additional spins are not paid spins. This works more along the lines of a cascade feature to give you extra chances to win.

The Ancient Supremacy feature triggers randomly in the Ancients Blessing online slot. That’s something we think is cool because it means that you don’t need to worry about hitting scatters. In the time we played it to check it out for this review, it triggered a few times, so it doesn’t seem to be super rare either.

The idea here is that all of the low-tier symbols will be destroyed. This allows more symbols to fall into place for more chances to get paid. Once again, this fits well with the game’s concept. However, it’s also a fun and atypical feature that isn’t just a copy of what’s available in many other titles.

A Note on Feature Synergy

How to Win at Ancients Blessing

With the volatility of this game being in the medium-low range, the right adjustment is clear. Between the way the features work and the high hit-rate and balanced pay table, there aren’t very severe swings on average at all. As such, the proper adjustment is to increase your bet size slightly.

Something around an increase of 33 to 50 percent is plenty, and going beyond that will defeat the purpose. The idea here is two-fold: First, you want to get bigger payouts. However, the second part of the idea is that your swings still won’t be very severe because of the below-average volatility and high hit-rate. This gives you the best of both worlds.

There are five ancients at the top end of the pay table. They make up the best wins in the game and help to trigger the feature. The red dragon is worth 75x for five of a kind. You can get five of the lion for 60x as well. From there, it’s 54x for five of medusa and 48x for five of Cerberus, the three-headed dog. Things are rounded out with the multi-headed hydra dragon being worth 42x for five.

The lower-tier symbols are the four card suits. However, they have been styled in a way that fits the theme really well. The red spade earns 36x for five. You’ll also get 30x for five of the golden heart. From there, the green diamond and blue club pay 24x and 18x for five, respectively.

The visual appeal of the Ancients Blessing online slot is excellent and drives up the overall style of gameplay, and this game is a perfect component of this developer’s whole portfolio because of its graphics level and play style. Something you will absolutely enjoy with this title is the value that the features add to your winnings.

Compared to other titles that utilize related themes, this slot stands out in a handful areas compared to only being like everything else. On top of that, everything is about excitement with this title, and that is tremendous for slot fans who want an action-packed style of play.

Some players may be disappointed that there aren’t more features. That can definitely be the first impression you get from looking at the game. However, this is sort of an illusion because the features that are in this game hit more often than you’d expect. That means the action is at a higher level than what you’d probably think by just reading about the game, so we highly suggest trying it out before you decide if it’s not for you.