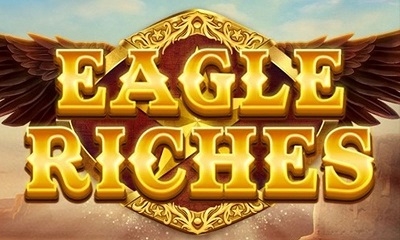 Red Tiger Gaming’s Eagle Riches online slot is based on the Southwest United States’ desert environment with a variety of animals and settings from that part of the world. You’ll find that the feature set matches this theme with chances to win in a variety of ways that are tied into the overall concept of the game.

An Introduction to Eagle Riches

Red Tiger Gaming has a history of giving players titles with an emphasis on strong gameplay without focusing so much on the themes themselves being that atypical, and that particularly interesting style of play that they can bring to the table has been the key to their success, which you can see with the Eagle Riches video slot.

This game gives players plenty of opportunities to get in on the action with great features while simultaneously offering a solid pay table with plenty of good pays in the regular game mode.

The presentation of this title isn’t bad at all with its Southwestern US theme. A number of animals have been crafted for the reels, and they look great. Along with that, you have a desert scene in the background that almost has a big of a Wild West feel to it.

The format for this title contributes greatly to its action-centric style of play. Here’s what you can expect:

The volatility level of this game is in the medium range, but you’ll still have a pretty solid hit-rate. The bulk of the volatility comes from the features and the somewhat top-heavy nature of the pay table, and it’s not so much from having a lot of major swings.

With that said, we recommend playing at a bet size on the lower end of what you’re comfortable with this game initially until you get a feel for how it plays since the hit-rate is a bit stronger than the volatility would suggest.

The feature set is all about action and complementing the regular pay table instead of being an alternative to it. As a result of that and the lack of wilds, the play style is a bit atypical here.

Random features are something that Red Tiger Gaming sometimes uses to add value to the pay table without making it super rare for players to get that value from some other type of feature.

The Eagle’s Shadow feature is a good example of that since you’ll randomly get it, and it occurs frequently enough to happen several times during your sessions.

The way this feature works is that there’s a random chance that an eagle flies over the reels. If that happens, his shadow will take up random spaces on the reels, and those will turn into mystery symbols that all match up.

The end result is that you get much better chances of getting winning combinations. On top of that, there are a lot of opportunities for multi-line wins from the same spin with this feature, and it’s the feature that hits the most often in the Eagle Riches video slot, which makes sense considering the name of the game.

The free spins mode in this game is called the Eagle Spins, and they have tied this feature into the main game mode’s Eagle’s Shadow feature. The idea here is that you can trigger a set of 10 free spins by getting the scatter symbol to show up on the first, third and fifth reels all at the same time.

During this game mode, you’ll be given a drastically increased chance of starting the Eagle’s Shadow feature. What’s more is that you can actually hit it multiple times on the same individual spin, which translates to opportunities for tremendous payouts.

We think it’s pretty cool how Red Tiger Gaming incorporated two different features in this game that both play off of the primary concept that the title is based off of while they also complement each other and build up each other’s value.

How to Win at Eagle Riches

With the Eagle Riches video slot, you’re dealing with a title that has an interesting pay schedule in that the one feature hits really often, the free spins hit occasionally and the regular pay table has a pretty strong hit-rate. While the overall volatility may be closer to a mid-range level, it actually plays as if it has a lower volatility in terms of what the swings are like.

As a result, we recommend that players consider going with a little bit of a larger bet size than they might use on average when playing slots. This will allow you to take advantage of the fact that the swings are so minimal while maximizing the size of the payouts that you get from the Eagle’s Shadow feature. It’ll also give you a much bigger boost when you get the free spins.

The pay table for this game is broken up into what’s essentially two levels of symbols, but there are closer to three tiers of pays with how things break down. It’s also worth keeping in mind that these regular wins will hit a bit more often than what many players are used to in order to compensate for the lack of a wild symbol.

At the upper end of things, you have the eagle symbol as the top-paying one, which is hardly surprising given the name of the game. Five of a kind of this symbol gives a very solid 800x win. It’s also the only symbol that pays for just two of a kind. Wins of 500x and 300x round out the upper tier of payouts for five of the buffalo or coyote symbols, respectively.

In the middle of the range of payouts are the ram, which gives 220x for five, and the cougar with its 180x payout for five of a kind. We’ll also include some of the card rank symbols since you can score 120x or 100x for five of the A or K symbols, respectively.

We’ve found that the Eagle Riches online slot brings a style of play that doesn’t often get used in the video slot sector. This comes from removing some of the obstacles from giving a high hit-rate so that a whole lot of value comes from the regular pay table.

When you mix in features that accentuate these pays instead of hindering them, you end up with a lot of small and medium payout with good opportunities for bigger wins. This is something that is made even more interesting by how the features combine and work together in the free spins mode for opportunities for some pretty tremendous payoffs.

Overall, this slot offers a play style that will be a good fit for many without a ton of bells and whistles that rarely factor into your actual sessions.