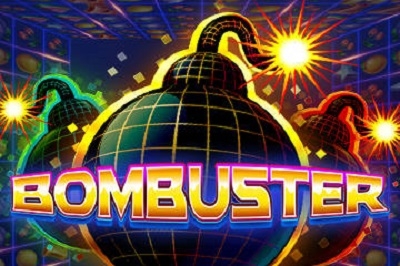 The Bombuster video slot by Red Tiger Gaming has an explosive theme that’s all about bombs on the game board that are just waiting to explode to give you better chances to win. This is an innovative title that does not fit neatly into any preexisting sub-genre, but it’s full of excitement and ways to win.

The video slot world is full of games that are in some way, shape or form often very similar to other titles. While this is partially the case for the Bombuster online slot, the fact of the matter is that we’ve never seen something quite like the feature set that this title offers, and that’s a pretty big deal.

The bomb-based gameplay fit over the fruit machine theme and cluster-based pays is definitely a unique combination.

Red Tiger Gaming did something really interesting with the theme here, and that includes a futuristic background that avoids the trap some developers make of having so much going on behind the reels that it distracts from the actual gameplay. Classic fruit machine symbols are used in this game, but they are formed in a way that looks very polished.

In terms of the feature set, it’s all based around the bomb theme that you can see from the title, and with the way they can stack and trigger each other at the same time, we can’t say that there’s anything else in the industry that’s directly comparable.

The layout and how you bet is pretty important to understanding the gameplay for this title. Here we’ll show you what to expect:

The volatility for this game is in the low-medium range, but the hit-rate is fairly high. Most of the variance comes from the fact that you can see that a feature is going to be triggered but not know exactly when, but we’ll get more into that dynamic further down below.

In any case, players won’t have to worry about particularly severe swings in this game most of the time, but that doesn’t keep them from ending up with chances to take down some pretty serious payouts.

The gameplay of the Bombuster online slot is dominated by two things: cluster wins that come as a result of the setup of the format and bomb-based features that make it easier to get those cluster wins. In what follows, we’ll show you how everything is set up so that there is no confusion on how it all works.

How the Symbols are Set Up

Something pretty cool about this slot is that the symbols are set up in a way that allows players better chances to make those cluster-based wins. This is because the symbols always appear stacked at least two high, and you’ll generally see several stacks of three or four on every single spin. With a 49-spot grid, this makes it much easier to get winning clusters beside of each other since you don’t have to worry about the symbols being so mixed up on an individual basis.

Wild symbols do appear on the game board as a part of the feature set, but they do not show up on their own. This is intentional as it would have added a bit too much value if they did, which would have had to been compensated for in other ways, driving the volatility up. The wild symbols not showing up regularly is a key component of the volatility being so low.

After you get regular wins in this game, the avalanche feature is activated. It’s handled in a really straightforward way: New symbols will fall down into place to give new chances to form winning clusters after winning symbols are paid and explode to create room on the game board.

This feature offers a higher hit-rate and more wins, but it also works in tandem with the other features in the Bombuster video slot to give players compounded opportunities to get paid.

There are three bomb types that can show up on the reels, and they each have different characteristics. They will stay in their starting positions on the reels for a random number of spins before they blow up, either by their timer going off (at random) or by them being exploded via being in the explosion path of a different bomb.

When a bomb shows up, you will see the directions in which it will explode showing on the sides of it either horizontally, vertically, diagonally or some combination thereof. The three bomb types are as follows:

The red bombs have a short fuse and blow up fairly quickly after they have appeared, so they also serve the function of often speeding up the explosion of the other two bomb types.

How to Win at Bombuster

Maximizing your chances of winning at this game centers around taking care that you pick and choose your bet sizes appropriately. A part of that is that you need to take into account the fact that you should not end a session while there are active bombs still left on the game board. Doing so will hurt your average return to player percentage.

In terms of actual bet size selection, we suggest going with an option toward the middle or slightly higher than the middle of the range of bets that you’re usually comfortable with. Something in the range of 125 to 150 percent of your regular bet size is sufficient here, and that will allow you larger wins without having to worry about serious swings since the volatility is only in the medium-low range.

Clusters of up to 40+ symbols can be paid in this game, and all of the symbols will win with a minimum of a cluster size of five. With the wilds, they don’t get their own payouts, so the best-paying symbol in the game is the lucky red seven. It gets you 1,000x for 40+, and that is the single best regular payout in the game. Wins of 900x and 800x are yours for 40+ of the silver bell or blue star, respectively, and it’s cool to see that the pay table is pretty balanced in this way since the wins don’t really fall off hard like what you see in other titles most of the time.

With the Bombuster online slot, you get a tremendous amount of action, but it’s brought to you by a combination of a very atypical feature set and a strong pay table that hits frequently. The graphics are strong for being of a fruit-based nature, and the overall gameplay is really just centered around a lot of fun action. That makes it a good pick for a ton of different types of players, and Red Tiger Gaming did an excellent job in putting it together.

Which online casinos have Bombuster?