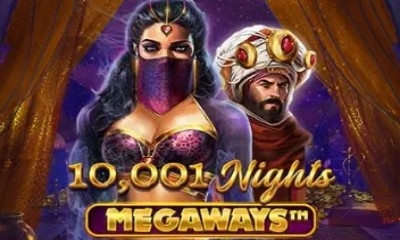 Red Tiger Gaming’s 10001 Nights Megaways online slot is based around the original Arabian Nights canon of stories. Originally called One Thousand and One Nights, the name is changed here to reflect the tons of ways you have to win with the features and Megaways format.

An Introduction to the 10001 Nights Megaways Slot

No shortage of different versions of the Arabian Nights stories have been told in various forms. There’s even a popular game that uses the name Arabian Nights, for instance. However, the 10001 Nights Megaways video slot from Red Tiger Gaming heats things up using this collection of stories as an inspiration.

The original canon had several stories and sources of excitement. This title mirrors that concept with a wide range of different features that provide value in a variety of ways.

You can see the whole idea unfold from the presentation the first time you open up the game. Gold coins are stacked all around in the background as you look out over an Arabian city. This all happens from a palace balcony, which fits the concept of so many of the original stories. You can even see the magical lamp from the most famous stories that Scheherazade told. Add in the symbol set that offers incredibly detailed animals and characters from the stories, and you have an excellent visual appeal.

Outside of the Megaways format providing a lot of small and medium wins, the gameplay is largely feature centric. It’s the kind of thing that offers so many ways to get paid that it can actually be tricky to remember them all, and that’s an indication of more features than you’ll find in virtually any other slot, particularly in the Arabian sub-genre. In any case, they all work together with each other to compound each others value as well.

If you’ve played other games that used the Megaways moniker, then you’ll be familiar with the general idea here. However, if you’ve not, then you shouldn’t worry. It’s pretty easy to get the hang of as long as you read over the following breakdown. This will show you exactly what is necessary to know to understand the flow of the gameplay.

The Megaways layout used here allows for a higher than usual hit-rate. This is one element that helps to keep the volatility from getting excessive. However, this title also has several bonus features that bring out a lot of value. These work in the opposite direction and tend to drive the volatility upward. As a result, you end up with a volatility that’s a bit above-average overall. It’s not extremely high, but it’s a bit higher than the average for the industry.

You’ll notice with this game that your number of ways to win is constantly changing. In the top-left corner, the current number of winning ways is always shown in purple and gold. This is really convenient and makes it easier to know what to expect. However, with this number changing so much, the betting cannot be based around it. Instead, you simply pay a set price per turn to play this game. Likewise, wins are listed out as a multiple of that price per spin for the sake of simplicity.

Gameplay and Features for the 10001 Nights Megaways Video Slot

We love the fact that this title has so many features. It’s as if someone took the gameplay style of 5 Wishes and expanded it even further. Regardless, the 10001 Nights Megaways online slot does have a lot to keep up with. As such, we strongly suggest taking a look over our breakdown of the features and game mechanics above. We believe this will make it much easier to hop into your sessions with confidence and know what to expect.

The first feature you’re the most likely to encounter centers around chain reactions. These pop up every time that you pick up a win in this game. When you hit a winning combination, the symbols that make it up disappear after you’re paid for them. Additionally, more symbols then fall down into those empty positions until the board is full again. You’re then given an additional chance to win. If you win again, the process repeats itself.

However, something to note is that the empty spaces always fill up with symbols of the same size. That means each reel will always have the same number of symbols on it as it did before the chain reactions. Additionally, this helps to keep things visually clear and avoid geometric complications of different sizes of symbols in the same column.

Every oil lamp that lands anywhere on the game board is collected. When you hit certain numbers, you’ll trigger special features along these lines:

This is a cool way to unlock features as you go and progress through the game.

The value of your spin is improved in a simple and straightforward but powerful way. All of the lower-tier symbols are removed from the reels. This increases your chances of winning but also improves the size of the wins when you hit them.

Across the second, third, fourth and fifth reels, random wilds will land. This puts as many as 10 wild symbols across those middle four columns.

You get three cards put on the screen with various multiplier amounts. This multiplier is then applied on the next win that you get in the game. You can pick up a 3x, 5x or 8x multiplier in this way.

As many as four Mega Wild symbols show up on the second, third, fourth and fifth reels. However, these expand to cover the entire reel they’re on. Additionally, they each have a multiplier of 2x to 7x that applies to each win that they’re a part of.

The free spins mode in this game is called Destiny Spins. Three of these symbols give you eight free spins. However, each bonus symbol past the initial three will add two more free spins to your initial total. During this game mode, you can add free spins for getting more bonus symbols as well.

In this free spins mode, each win increases a total multiplier that can get up to 20x. This applies to all wins that happen during the free spins bonus round.

The only thing players need to focus on with this is that the volatility is above-average. As a result, a good adjustment can be to slightly lower your bet size if you don’t like a lot of swings. However, this adjustment is obviously optional. It will not increase your payout percentage. Instead, it will only smooth things out a bit and make them less swingy.

For the man in red, you can earn 3x for six of a kind combinations. Additionally, the tiger and camel symbols pay 1.4x and 1.2x for six of each, respectively. From there, the vase pays 1x for six, and things drop down to 0.8x for six of the pair of shoes.

The lower level symbols are intricately decorated card suits. To start with, golden spade symbols are worth 0.7x in this game. Additionally, the red hearts are worth 0.6x while the blue diamonds get you 0.5x for six of a kind combinations. Finally, six of the purple club nails down a 0.4x prize.

You’ll notice that some of these wins seem a bit on the lower side. However, this is because of the way the format works. It’s much easier to get several wins for a single symbol at a time in this title. That means your average wins will be larger than they seem based on these pure numbers alone.

Red Tiger Gaming’s work with the 10001 Nights Megaways slot somewhat reminds us of the appeal of the Caravan of Riches game. The Arabian theme is similar for sure. However, the gameplay is faster paced with a higher hit-rate and more features. We also believe this title to have better graphics. Overall, it has enough to appeal to pretty much everyone, especially if you like a wide range of features all in the same slot.

Which online casinos have 10001 Nights Megaways?

What is the Return to Player (RTP) for 10001 Nights Megaways?