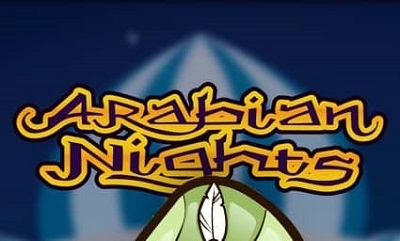 Arabian Nights is a progressive online slot by Net Entertainment. This features an Arabic theme with a beautiful nighttime background in the city. With wild multipliers, a sizable progressive and a free spins mode that also has multipliers, this is a game full of ways to get paid in a big way.

An Introduction to Arabian Nights

The Arabian Nights online slot centers around the setting and visual motifs of the set of stories told by Scheherazade to break the cycle of the king marrying women and immediately killing them each day in her legend.

This game brings those stories alive and gives players a visual motif and style of gameplay that lives up to the importance of Scheherazade’s stories.

From the aesthetic standpoint, it’s hard to do better. This title looks great with its simplified graphics that don’t look dated at all.

On the gameplay side of things, there are a few features here that compound the effects of each other to really give you something to get excited about. While the volatility of this title is on the lower end as far as games go that have progressive jackpots available, the action is pretty serious with different sources of multipliers and other features.

The layout for the Arabian Nights video slot gives you a pretty solid foundation for play without giving you so many ways to win that you can’t keep up with them all. Here’s a summary of what you’ll get with this title:

It’s clear that there are a lot of betting options with tons of increments so that you can pick out the size that fits the best with what you’re comfortable with. However, this is also a pretty timeless format that’s an excellent foundation for a video slot, especially with the progressive jackpot and a feature set that works well for this number of paylines.

The feature set for the Arabian Nights progressive slot consists of a number of distinct elements that shape different parts of the overall experience. In what follows, we will break down the different features and gameplay elements that make up this title.

The man holding a red gem is the wild symbol in this game, and he will make an appearance on every single one of the reels. He’s a key symbol for a number of reasons, but here are the payouts you can expect:

We’ll get into the progressive jackpot down below, but these wilds are important on their own. First off, they clearly help you to get additional wins that you would have missed out on if they didn’t show up. However, it doesn’t stop there.

The magic lamp that the genie comes out of is the scatter in this game. It appears on all five reels, and it gives the following scatter payouts based on the size of the total bet:

On top of these payouts, you can also trigger a free spins bonus feature whenever you get at least three of these on the game board at the same time. This feature always gives you 15 free spins no matter how many scatters you use to trigger it, and you’ll also get a 3x multiplier on all non-progressive wins as a part of this feature.

About the Progressive Jackpot

The progressive jackpot in this game is triggered by getting five wild symbols on the same payline.

The average win for this top prize is in the range of €1.5 million, meaning that it’s definitely something that can change your life.

In fact, it’s gotten up dangerously close to the eight-figure range before. It previously hit at €8.6 million once before, putting it up there with games that have paid out prizes that were among the largest ever in online gambling history.

With that said, this prize seeds at €125,000, so it may take you some time to see it get on up in the seven-figure range after it’s been won.

It’s also worth noting that your chances of winning the progressive scale based on the size of your wager to keep things fair. For example, a bet of €2 will have twice the chance to win the progressive as a bet of €1. However, all other wagers will scale as usual to compensate.

How to Win at Arabian Nights

With almost all progressive jackpot games, you’ll have a very high volatility that will make players want to consider smaller bet sizes than usual (often paired with longer sessions). However, the Arabian Nights online slot is a bit atypical.

This game has a mid-level volatility, and it’s on the lower end of mid-level at that. What this means is that you should actually avoid making any serious adjustments. What you should do is play your normal bet size that you’re comfortable with instead of tricking yourself into making some other type of adjustment that will actually lower your enjoyment of this slot.

It’s worth noting that all of the above symbols except for the camel will pay for just two of a kind or more.

The Arabian Nights progressive slot by Net Entertainment offers players a low-volatility progressive jackpot experience that pays out on the same level as other big names in this particular part of the industry. It’s a game with big features as well, including different ways to get multipliers and a value-packed free spins bonus round.

The hit-rate is also noticeably higher than most other progressives. A big part of this is that the majority of the symbols in the game pay for just two of a kind, and that includes the four highest top-tier symbols along with the wild and the scatter symbol.

Overall, this game brings it in ways that many others do not, and it goes to show that Net Entertainment can make particularly strong titles based on just about any type of theme or concept.

Which online casinos have Arabian Nights?