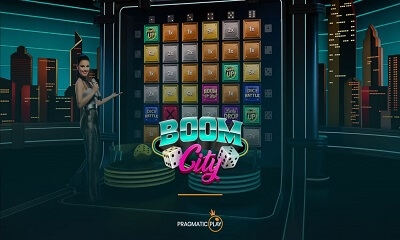 Boom City is another trend-setting live casino game show by Pragmatic Play. It features a distinctive mechanic where two dice and a 6×6 grid determine the outcome of each game round. The game is packed with multipliers, bonus symbols and other win-boosting bonus features to earn you a maximum payout of 20,000x.

In this article, we’ll explain how to play the game, share tips to secure wins and lots more besides.

An Introduction to Boom City

With its vast library, Evolution Gaming is arguably the most dominant casino software brand when it comes to live dealer games. However, Pragmatic Play is bent on shaking things up just as strongly, as underlined by its release of Boom City Live.

With this offering, they bring a freshness to the world of live casino games. Their decision to use dice-based gameplay rather than spinning wheels, which we’ve all become used to, is a welcome diversion.

This game is set in a studio with an animated city skyline in the background and neon lighting lining the walls. The dice used to play are placed in separate cylindrical containers in front of the grid, which is also framed by neon lights.

Boom City is a much-needed breath of fresh air in live casino gaming. Say hello to an intriguing and potentially rewarding gameplay mechanic, where rolling dice can earn you up to 20,000x.

This game does not use the regular spinning wheel mechanic found in similar casino games, but its rules are just as simple. Instead, it features a pair of dice and a 36-square grid with eight different types of square.

These dice are blue and gold, matching the lighting beneath them, and they work together to determine the winning square. The Blue die selects positions on horizontal rows only, while the Gold die only selects positions vertically.

Before you start to play, you’ll need to bet on any or all of the six squares at the bottom of the grid. There are three regular squares with multiplier values of 1x, 2x and 5x and three special squares that trigger the bonus rounds. We’ll discuss these bonuses in detail later.

The final two square types on the grid are called Bust and Power-Up, but you can’t bet on these. You have about ten seconds to place your bets before the next game round begins.

These two squares can make or break your chances of winning in Boom City. The Bust Square is the one dreaded square you don’t want to end up with throughout the game. Why? Selecting this square will end the game for you!

On the other hand, the Power-Up Square is the Midas touch for golden wins, increasing multiplier values before the next roll. This square is so valuable that it transforms even Bust Squares into rewarding Bronze Squares with 1x multipliers. As expected for such a precious symbol, you have a limited number of Power-Ups per round.

Bronze, Silver and Gold are three of the squares you can bet on in Boom City. They carry multiplier values of 1x, 2x and 5x, respectively. Pragmatic Play has designed this game with varying numbers of occurrences for each square. As expected, the Bronze Square is the least valuable, hence it appears the most on the grid.

The Dice Battle game is activated when the dice fall on the corresponding square. At the start of the round, you have to pick between the Gold and Blue dice. After three rolls, the dice with the highest cumulative value wins and all multipliers from both sides are awarded to the winner. Easy, isn’t it?

The good thing about this bonus is that both the winning and losing sides are awarded payouts anyway. While winners get multipliers from both dice, the losing side is only awarded the multiplier value of their dice. If your die rolls three consecutive sixes, you’ll earn a whopping 500x reward on your initial bet. Also, both sides earn equal payouts when the result is a tie.

This feature is triggered just like Dice Battle. When it begins, the grid is transformed into six columns with numbers corresponding to each die side. Each column also has four stacked multipliers ranging from 10x to 250x but the least multiplier win for each is 5x. What that simply means is that whatever the outcome of this round is, you’ll be walking away with a 5x win.

To start, you choose a column, after which both dice will be rolled thrice simultaneously. Each time the die result appears, one of the stacked multipliers on its corresponding column drops into the grid. At the end of the round, the total multiplier win for your column will be applied to your win.

This bonus round happens on an entirely new 6×7 grid and is the most engaging of all three bonus features. In the daring round, you go on a journey through six levels where you have to navigate through multipliers and Bust Squares. The Bust Square in this round doesn’t kick you out of the game, though. Instead, it simply ends the feature.

A roll of the Gold die sets things in motion by choosing a minimum safe multiplier based on the number that rolls. The higher you go in Boom or Bust, the bigger the multipliers and the more the Bust Squares per row. Thankfully, you can look out for the Hyper Square, which takes you directly to the sixth row above with a guaranteed multiplier.

Now that we’ve walked you through the basics of this live dealer game, here’s a quick recap of how the game works:

Where to Play Boom City

Eager to set the dice rolling in the Boom City Live Show? We’ve got a list of regulated casinos for you to play right here at the top of this page. Each casino on our list has been certified safe by our team of experts with the required licensing from top regulatory agencies.

Don’t forget that when you open a new account you’ll pick up a generous welcome bonus!

How to Win at Boom City

Given the nature of this live game, there isn’t really a straightforward way to ensure that you win. However, there are still a few solid gameplay tips that make up every good casino strategy which you can apply.

First off, only select convenient bets before you start. It is always a good idea to start small, particularly if you’re new at this, until you get the hang of it. This will boost your confidence, which is necessary for you to fully enjoy this game.

Another helpful tip is to use Autoplay feature, so you can concentrate on the game itself. Playing windows here last for mere seconds, so it’s easy to miss out on the action if you’re distracted. A bonus game like Boom or Bust especially requires your attention, so keep your eyes on the screen.

Finally, resist the urge to keep playing when you’ve made a reasonable profit. Enjoy the game and don’t forget that responsible and fun gambling is the goal.

Pragmatic Play has reinforced its position as an iconic casino software brand with the creation of Boom City. This live game is peak creativity on display, adopting an excellently designed mechanic to flood players with multipliers. Choose your squares and keep your fingers crossed for that 20,000x max win.

Pragmatic Play, a top-tier supplier of iGaming content, is the creator of this engaging live casino dice game. The developer is famous for its library of thrilling titles, including slots, table games and innovative live dealer products.

What is the Boom City RTP?

The Boom City RTP is 96.43%. This falls within the average RTP range for live games. As such, you stand a good chance of landing a nice return.

How do you play Boom City?

This live game is played using a pair of dice and a 6×6 grid of possible outcomes, including multipliers and bonus symbols. Find more information about its unique game mechanics and the Boom City rules further up this page.

Is there a winning strategy for Boom City?

Right now, there is no clear-cut strategy to secure wins in Boom City. Like many other casino games, the outcome of each round is randomly determined. However, you’ll find helpful tips to increase your winning chances elsewhere in this review.

Which online casinos have Boom City?