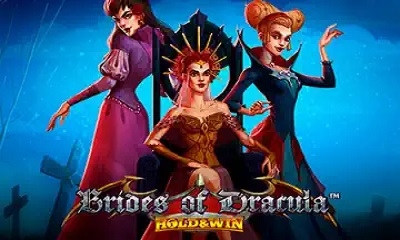 The Brides of Dracula online slot by iSoftBet is based around Dracula and his three brides. The original version of this tale had three killer, monstrous brides who were an important part of the story. Here they are brought to life, so to speak, in a feature-filled experience.

Casinos with Brides of Dracula

An Introduction to Brides of Dracula

So many variations of the original Dracula story have been done that many people don’t know the real version. With the Brides of Dracula video slot, iSoftBet has committed a bit of a throwback in a sense. The original characters are brought to the forefront of this title in a major way.

By putting an emphasis on the three brides, the gameplay and visual appeal becomes much more interesting.

The theme of this game centers largely around Dracula’s three brides as depicted in the original book. They are just as much of the monster as he is, and they’re shown to be even more the case to the men who seek them out. However, in this title, they’re used as key elements on both the regular pay table and in the feature set. Along with the background and other symbols, they are a part of an excellent overall presentation.

The gameplay for this title is based around giving players several ways to win. Variety is really the name of the game, so to speak. If you like that style of play, then you’re in luck here. Additionally, the types of features used vary between hitting often and less frequently. This gives players plenty of action while still reserving some features for something special.

With such a classic story at the forefront, iSoftBet decided to go with a very straightforward format. This format serves as a strong foundation for the gameplay style choices they made. Here’s what you can expect:

When we talk about the sizes of the payouts in what follows, we’ll be talking about them in coin amounts. For example, if your coin size is €0.10, then a 100x win will be worth €10. To convert this to being a multiple of the total wager, divide the payout by 25.

Additionally, we want to point out that the volatility for this game is in the medium range. It’s very balanced with a lot of opportunities to get wins at all levels. The features do provide a lot of value. However, the regular pay table has such a solid hit-rate that it balances everything out pretty well.

With the Brides of Dracula online slot, we really think that getting to know the features before playing is helpful. To this end, we break down all of them in what follows. Note how the variety of features gives players a lot of different ways to win and keeps things exciting.

Van Helsing is the supposed hero of the Dracula story. As such, he’s the wild in this title. The payouts he has available are the best regular wins that you can get anywhere in the game. Here’s an overview of what you can expect:

Something worth noting is that this wild does not substitute for the scattered moon symbols. However, it does count for every other regular symbol in this game.

We also want to point out how the wilds are evaluated in this title. The approach iSoftBet takes is based on looking at each payline individually. On each line, the wilds are chosen to act in whatever way will give the single best payout. That can mean substituting for certain symbols. However, it can also mean simply giving wild payouts.

This creates a situation where a wild at the intersection of two paylines can actually substitute for different symbols at the same time. Additionally, it can count as a wild payout on one line while counting as a substitution on another.

When you’re able to pick up at least five of the scattered moon symbols on the board at the same time, the Hold and Win Re-spin feature is triggered. You start off with three re-spins in this feature, and gameplay proceeds as follows.

All non-scatters are removed from the reels except for a special gem symbol, and the existing scatters stick in place. If you get another scatter, it also becomes sticky. Additionally, the number of re-spins will reset back to the same number you started with (three).

Three of the blue gems on the reels will expand the game board vertically by one row. This can happen multiple times. The green gem increases payouts, and the red gem adds another re-spin. You can also increase the multipliers to 2x, 5x and 10x with the purple. However, these are all for three of a kind combinations.

In any event, this process repeats with the re-spins until the board is full or you run out of re-spins. At that point, all of the values shown on the moon symbols add up and are awarded to you in a single lump sum.

On any random spin, you can trigger the Pick a Letter feature. It shows three letters with random modifiers in them, and you get to choose one. This is one of the cooler parts of the Brides of Dracula video slot because it plays on the fact that the original book was set up as a series of letters and journal entries.

Three different modifiers can be had for the next spin with these letters:

These features add value in a variety of ways. We really like how iSoftBet offers different angles here in terms of giving players ways to get paid.

How to Win at Brides of Dracula

With this game, the volatility is in the medium range, so the swings aren’t much of a problem. They won’t be particularly high. However, they also won’t be particularly low. To this end, it’s best to simply choose a bet size around the middle of the range that you’re comfortable with. No betting adjustments are really necessary or useful here.

Payout Structure for Brides of Dracula

The rest of the pay table is centered around card rank symbols. You can pick up 100x for five of the red A or blue K symbols. Additionally, players can earn 50x with five of the violet Q or purple J.

We seriously enjoy how the visual appeal gives players an overwhelmingly intense gameplay experience instead of just being an unimportant part of the video slot, and when compared to other games with similar driving concepts, this slot is different in a few ways as opposed to only being one in the same. Since this game brings a serious level of quality while still having a lot of value individually, this slot fits really well in this developer’s selection of titles as a whole.

Something you will absolutely love with this slot is the extra value that the plethora of features add to your account balance. Along with that, if excitement is exactly what you’re needing in your play, then you’ll really enjoy the style of gameplay that this game gives to your sessions.

Which online casinos have Brides of Dracula?

What is the Return to Player (RTP) for Brides of Dracula?