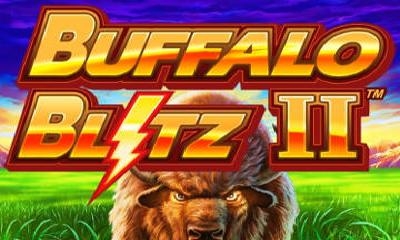 Playtech’s Buffalo Blitz II online slot is the direct sequel to the original game, and it brings tons of action just like the original but with extra features that aren’t really seen that often. You’ll have a whooping 4,096 ways to win on every spin during the regular game mode and over 14,000 ways to win during the free spins bonus round in this game.

An Introduction to Buffalo Blitz II

The Buffalo Blitz II video slot is a game that takes full advantage of “outside of the box” thinking when it comes to applications and variations of existing game structures and feature sets. The whole idea is that it takes things far enough outside of the norm to be extremely interesting and exciting without going so far that it becomes alienating for players.

As a result, this is set up to be one of the most straightforward but also most exciting and action-oriented titles that you can find online.

Something we really like about this slot is that players can bounce between the original and this sequel if they want to see which advances were made, and that’s an option that you don’t have in most games.

While the theme is somewhat generic in terms of having a lot of different North American wild animals, though that’s not a particularly common concept for a slot, the gameplay is the star of the show here and stands out in an absolutely huge way.

The format is a major point behind what makes this such an action-packed game. It’s normal enough that you can jump in and get started without having to learn a completely new way of playing, but it’s pretty different than most games.

For the purposes of the payout structure, every spin is assumed to be played with 50 coins. You divide your total bet size by 50 to get your given coin size. Wins are then displayed in terms of multiples of that coin amount.

The volatility of this game is fairly low. That’s because the hit-rate is so high and the pay table is balanced. The features are great, but they hit fairly often with all things considered, so they don’t increase your overall volatility that much.

The feature set of the Buffalo Blitz II online slot really creates a situation where you can get a ton of hits on individual spins while also making it easier to get small and medium wins that accumulate over time to keep your account balance up while you shoot for the higher pays.

The diamond symbol is a wild in this game. However, since it shows up on every reel except for the very first one, it does not have its own payouts. With that said, it gives you a pretty tremendous amount of value for multiple reasons, one of which being that it shows up on most reels in an all ways format game.

These wilds also offer random multipliers that can boost your payouts even more.

The whole idea here is that you’ll have diamonds randomly apply multipliers of 2x, 3x or 5x to any win they are a part of. This gives you bigger payouts than it seems like you’ll be getting on average, and it effectively acts as if you’re getting randomly stacked wilds because of the multiplier effect that gives in an all ways game.

The “Free Games” symbol makes an appearance on each of the six reels of the Buffalo Blitz II online slot. It helps you to get free spins, which are worth quite a bit more than their regular game cousins.

The number of scatters you have on the board at once will determine how many free spins you start with for the bonus round along the following lines:

However, you can also re-trigger with just two scatters to add five more free turns to your total.

During the free spins feature, you will have a different format on the reels than the usual game mode. The second and fifth reels will expand to show one more symbol for a total of five, and the third and fourth reels will expand to show two more symbols for a total of six. In the end, you will have 14,400 ways to win on each and every spin with the all ways format during this bonus round, and that adds a tremendous amount of value to the game mode.

The Buffalo symbols are the most important regular paying symbol in the game for two reasons. First, it pays the highest of any of them. Second, it always shows up stacked on every single one of the six reels.

The payouts for this symbol are as follows:

It’s critical to note how flat and balanced the pay table is for this symbol. Since it shows up stacked, you’ll virtually always get multiple combinations of this symbol when it wins, which multiplies your winnings. If you have a wild that happens to catch a multiplier in there, then the payouts can get to be pretty huge.

How to Win at Buffalo Blitz II

The hit-rate of this game is super high between the all ways format with 4,096 ways to win during the regular game mode and the fact that so many symbols pay for just two of a kind. This contributes to the Buffalo Blitz II video slot having a pretty low volatility. As a result, we recommend increasing your bet size to the upper end of the range of sizes you’re comfortable with in a game since that’ll give you better payouts while still keeping the swings fairly low with all things considered.

Other than the buffalo symbol, there are four other symbols that pay for two of a kind or more. The cougar and the raccoon both pay 200x for six of a kind. Additionally, the moose and the grizzly bear will get you 150x payouts for six matching symbols.

The card rank symbols round out the rest of the pay table, but the wins aren’t on as sharp of a drop as you might expect. The red A and orange K still give you a payout of 120x for six of a kind, for example. From there, the payout is 100x for six of the purple Q and blue J, and you can also win 80x for six of the yellow 10 or green 9 symbols.

These card rank symbols all need at least three of a kind for a payout.

With the Buffalo Blitz II video slot, you’re getting a whole lot of action without being bombarded with features and bells and whistles that rarely hit. It’s one of those things where most of your value comes from the regular pay table and a single bonus feature that’s pretty easy to hit because it only requires three scatter symbols to hit on a 6×4 layout game.

Overall, if you don’t mind games with a bit of a generic theme but love fast-paced action, this is a game to add to your list.