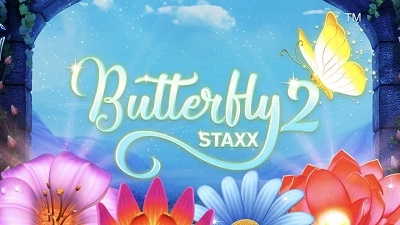 Butterfly Staxx 2 is the sequel to the original title in this series by Net Entertainment. This game is oriented primarily around a set of high hit-rate bonus features with the Butterfly Frenzy mode, Butterfly Spins with chances for an extra play area to emerge and a special re-spins feature with stacked butterfly symbols stacking in place until the spins are over.

An Introduction to Butterfly Staxx 2

The Butterfly Staxx 2 online slot by Net Entertainment is the sequel to the first installment in the series and keeps things going with a similar style of play and graphics. Things are a little more high quality in the general sense than they were the first time around, but this is still a title with a high hit-rate and a low volatility.

If you like a play style that centers around giving players chances for several wins on the same turn and a low volatility, then this is a title you’ll definitely want to check out.

Visually, you’ll see lots of butterflies, lilies and similar symbol son the game board. The background frames the reels with a stone archway with lamps and flowery vines, and in the background behind the reels, you can see a mountain and forest landscape.

In terms of gameplay, the volatility is low, and the hit-rate is high, giving this game small swings a majority of the time that are really easy to manage.

Net Entertainment decided to keep things fairly simple with this title but to keep the format set up in a way that it will complement the feature set. Here’s what you’ll have going on:

We want to point out that all of the wins in this game are coin values.

The gameplay in this slot is fast-paced with a lot of small and medium-sized wins. This is not a game for seeking out one huge payout. Instead, it’s all about shooting for the features that run up several smaller wins all at once.

The wild in this game is the glowing lily that’s purple, orange, red and yellow. It appears on every reel, but it does not give you any winning combinations on its own.

This wild symbol works by giving you the best available symbol to give the best payout possible for each individual payline, even if that means counting as different symbols to make different winning combos for each line.

The scatter is the only thing that this wild will not substitute for, which is pretty typical in the industry as a whole and does not affect your gameplay in a negative sense.

The butterfly symbols show up stacked on all five reels, and if a stack completely fills a reel, then that activates the re-spin feature.

The way this works is that every butterfly will move to the far left-hand spot on the given row that isn’t already occupied by a butterfly symbol. This continues throughout the feature.

If the first and second reel become filled with butterflies, then two new play areas will open of five sets of reels. This feature continues in those spots, and you’ll get winnings from those two new sets of reels as well.

Once the feature is over, all of your butterfly wins are paid out, which are pretty strong considering it’s the highest-paying symbol in the game.

There’s a scatter symbol with two pink roses. They show up on the first, third and fifth reels only. If you get all three on the game board at once, then you get to select between two features: Butterfly Spins or Butterfly Frenzy.

It’s hard to say which of the two options is the best for your bottom line based on the value they give. They even have a similar level of volatility as each other. As such, we recommend players simply pick which one appeals to them the most and take it from there.

The butterfly spins are an interesting “spin” on the re-spin feature. Only cocoon symbols can land on the reels during this feature, and you start with all three of the available game areas open and activated.

The butterflies you get move to the left-hand side of their respective game boards like what we mentioned above. You get butterflies from the cocoons being active, but they can also be dormant. You get a number of spins, and then the feature is over. That’s when your butterfly payouts are added up and awarded to you.

The butterfly frenzy mode is a little different. Instead of it playing out on the reels, you get to select butterflies that are flying around glowing in front of a mountain landscape.

There are up to five stages that can happen in this mode, and each butterfly you get gives you a random win based on a range that’s particular for each mode:

Again, we see that the Butterfly Staxx 2 online slot’s gameplay centers around lots of individual hits that aren’t that large on their own but that can add up to some series prizes.

How to Win at Butterfly Staxx 2

The volatility in this game is incredibly low, and the hit-rate is super high. As a result, you’ll have much lower swings than you see in the vast majority of other online slots.

A good strategy to use as a result of this dynamic is to increase your bet size a bit and use the fact that the swings are small to safeguard your account balance from large fluctuations. In the meantime, you’ll have better opportunities to get bigger payouts from the butterfly-based features.

The three flower symbols in red, purple and blue make up the mid-range pays with 40x for five of a kind each. You’ll need at least three of these for a win.

On the bottom end of the pay table are the card rank symbols A, K, Q and J that all come in some shade of green that matches the game’s theme really well. All of these pay 20x for five of a kind. The payout structure is pretty easy to remember as a result of how it’s laid out in these tiers.

This game may not be for everyone, but we think that most players will find something in it that they enjoy.