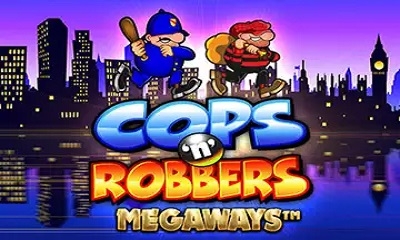 The Cops n Robbers Megaways online slot brings players into an exciting experience. You can think of yourself as chasing down the robbers or of pulling a fast one yourself. In either case, you’re getting serious chances to make off with a whole lot of loot in this one.

Inspired Gaming has several games in the Cops n Robbers series. They’ve taken on all kinds of different formats and feature sets. In the Cops n Robbers Megaways video slot, they take on one of the hottest layouts and approaches to the game that you can find in the modern era.

Even though the Megaways layout is used here, that’s not where the action stops. This is a game completely packed with features and ways to get paid.

We love the presentation of the game. They still use the original style of graphics, but they have been updated for newer releases. The cops and robbers both look very funny. On top of that, the other symbols have a really fun animation style that simply feels good to look at. The aesthetics aside, the animation is really smooth as well.

On the gameplay end, the features are pretty serious here. You’ll get lots of ways to get extra wins that aren’t from the regular pay table. That’s the sort of thing that players really like to see. As a result, we’re happy to report that this is exactly what you’re getting in this title. However, the hit-rate is still fairly high considering the Megaways format being used here.

It’s really easy to get used to the betting setup and layout used for this slot. However, there are a whole lot of ways to win, and if you’re not used to that, it may be an adjustment compared to what you’re more used to. With that said, it’s not difficult or anti-intuitive at all. Here’s what to expect:

The high hit-rate and value-packed features balance out in this game. As a result, you end up with an above-average hit-rate paired with a medium overall volatility. This lends itself to a balanced style of play that will appeal to the vast majority of players.

The feature set for the Cops n Robbers video slot is pretty substantial. There’s a lot going on and a lot to know about when you get started. We’ll work through all of it here so that you aren’t lost when features start firing off that you didn’t know about.

The wild dog appears across the extra four spaces on the second, third, fourth and fifth reels only during this regular game mode. However, in the free spins mode, he can show up on the reels normally.

With that said, he does get his own wins during the free spins mode. They are as follows:

These wilds help to give you lots of extra wins in the Megaways format. However, they also have some pretty solid wins on their own.

Every win that you get in the regular game mode triggers the cascade feature. The way this works is that all of your winning symbols pay first. From there, they will all disappear. This allows new symbols to fall into the spaces left behind.

The entire point is that you’re given extra opportunities to win by these symbols falling in. It’s a great way to pick up additional wins. However, there’s more to it than that. If the extra chance leads to wins, the process continues over and over again. The cascade feature only ends when there are no more new wins.

Note that the extra four spaces across the top of the middle four reels spin slightly differently. Instead of falling vertically, they fill in from right to left. This doesn’t really change much at all from a functional standpoint, but it’s worth noting to avoid confusion.

Inside of the regular game mode, you have a random chance to trigger reel modifiers. These are extra ways to get paid with special, randomly chosen features. This is activated when the police lights start to spin and flash. It will land on either red or blue.

If it lands on blue, you’ll get random mystery symbols. These will all turn into a matching symbol, which increases the opportunities to get winning combinations, and that’s what the entire game is about.

With the red light, you’ll have a series of spins where you get increasing numbers of ways to win. The robber shows up and moves across the reels at the bottom of the screen. If he makes it to the end of the reels during this mini-feature, you get extra bonus symbols.

Three or more scatters anywhere on the game board of the Cops n Robbers online slot triggers a bonus. You get to choose between two different types of features as a result.

The Chase option plays out spins with a robber trying to sneak past some cops. This adds value to your resulting spins. It looks like a board game playing out, and it centers on a red die moving the robber while the blue die moves the cop. Each space you can land on gives you instant wins, and multipliers are also available.

How to Win at Cops n Robbers Megaways

This game has a medium volatility. This is because the hit-rate is fair, but the features help to add a ton of value. As a result, there’s not really any advantage to a deviation in your average bet size that you’d normally be comfortable with. In fact, that’s what we recommend players stick with in this game.

The Cops n Robbers video slot symbol has the best payouts with 50x for six of a kind. Other than the wilds in the free spins, it’s also the only regular symbol to have a win for two of a kind. All others require at least three. Also keep in mind that all wins we discuss are multiples of the overall bet size.

The cop pays 7.5x for six, and he’s a bit higher than all other non-logo symbols. For example, the money bag and stack of money both pay 2x for six of a kind. From there, you can earn 1.75x for six of the cop car or the red A card rank symbol.

With the green K and purple Q symbols, wins of 1x are yours. The blue J symbol pays 0.9x for six, and the pay table is rounded out with 0.8x for six of the yellow 10.

The presentation and throwback aesthetic appeal of this title offers a gorgeous feel that’s definitely comparable with most that the casino industry overall has going on. Also worth noting, as part of this software developer’s portfolio as a whole, this is a title that fills a key job since it appeals to many players.

As if that wasn’t enough, the overall concept used as the centerpiece for this title is a central springboard for the style of play and excitement. The feature-oriented gameplay of this title is all about giving video slot fans a tremendous degree of excitement, and the feature set includes a variety of different additional ways to take down a win on top of the normal pay table offering.