Creature From the Black Lagoon 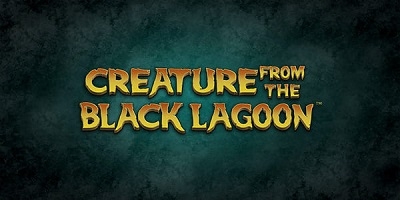 Based on the classic film, the Creature From the Black Lagoon online slot is a title produced by Net Entertainment that includes animated versions of characters from the movie and a tremendous feature set. All of this comes together to give an exciting and thrilling look, feel and gameplay experience for players.

Casinos with Creature From the Black Lagoon

An Introduction to Creature From the Black Lagoon

One of the classic horror movies is the centerpiece of the Creature From the Black Lagoon video slot that Net Entertainment has put together as a part of their licensing deal with Universal.

This title combines all of the elements of the movie to give players a slot experience that really immerses you in what’s going on with the symbols on the reels.

While the graphics are done in an animated style, they come across as super authentic and are done in the style and spirit of the film. There weren’t any serious “artistic liberties” taken with this approach, which is unlike what you often see from some other software providers with games based on established media brands.

On the gameplay end of things, the action is really serious with a tremendous portion of the play based on certain features that come up pretty often.

The layout for this game is solid enough and doesn’t really leave players in a position where they have to get used to much that’s new. Here’s what you can expect:

You’ll find that the format lends itself to being pretty standard, but they’ve worked the features in a way that this doesn’t impede the gameplay in the least bit. This type of layout is so common because it’s such a solid foundation for many types of online slots, and there is no exception to that part of the situation here.

With that said, this game does have a fairly low volatility that’s in the medium-low range with a balanced pay table, and that’s something that may inform your bet size selection.

The feature set for this game is pretty action-oriented with bonuses that hit pretty often based simply around how the game is set up.

There are three wild symbols in this game, and they all have the Creature From the Black Lagoon online slot logo on them, which is also the logo from the original film. The reason for there being three wilds is that they behave a little differently.

The orange and yellow wilds will have a chance to spread in the free spins mode, but the green one does not.

All three of them also act as a catalyst for a re-spin, which we’ll look at below.

It’s worth noting that while these wilds help you to get additional winning combinations, they do not have any special wins available on their own just for combinations of wilds.

If you get one or more wilds on the game board, you will activate a re-spin feature. The wilds will hold into place, and all of the other symbols will spin to give you another chance to win with no additional cost.

Also, if you pick up another wild on that re-spin, then all of the wilds on the grid will hold in place for yet another re-spin, and you can do this multiple times in a row on the back of a paid spin.

These symbols are scattered, and while they don’t give payouts along with free spins, they can show up anywhere on the board to give you the feature. They don’t have to line up on any particular reels or paylines.

During the free spins, you can collect target symbols to add spreading wilds, or you can get 10 extra free spins with them instead. You can also re-trigger the feature normally with more of the scattered bonus symbols.

How to Win at Creature From the Black Lagoon

The number of paylines is static, so you don’t have to be concerned with making sure you have that set to a specific number to keep your RTP percentage up in the Creature From the Black Lagoon online slot.

However, you do have the option to increase your bet size slightly since the volatility of this game is relatively low. This will increase your wins without turning the swings into anything substantial, and that’s the kind of thing that a lot of players can get behind.

Payout Structure for Creature From the Black Lagoon

The top-paying symbols for this title are all characters from the movie. However, they are also blended with specific colors to make them easier to identify from a visual standpoint since they’ll be all over the reels in different positions on each spin.

Kay is the main character, and she comes with a red background. She’ll pay out 750x for five of a kind combinations. Close behind her is David in yellow, and he’s worth 600x for five. Five of Carl in green with the camera gets you 500x, and five of Lucas in blue is worth a solid 400x payout.

You’ll notice that the payouts for this game fall off gradually instead of all at once, and that’s something that makes this game have such a smooth style of play with such a reasonable volatility.

At the lower levels, you get two sets of two symbols each with the same payouts. The binoculars and the oxygen tank are worth 125x for five of a kind combinations. From there, the camera and knife symbols are worth 100x.

Even the low-tier symbols are detailed and meaningful in the context of the theme of the game, and that’s something that shows how much thought and effort Net Entertainment put into this title.

There’s no shortage of online slots made after popular films, and Net Entertainment has made a number of them as well. However, where Creature From the Black Lagoon stands out is that they’ve really but a serious focus on gameplay while incorporating the same characters and themes from the movie without just pulling in direct images from the film itself.

This means that you get a twist on this theme while it stays true to the source material, which is something NetEnt has proven that they can do well over and over again. With this title in particular, it has been done extremely skillfully.

If you’re a player who likes games with balanced pay tables and solid features, then you’ll enjoy this slot even if you don’t know anything about or care about the movie itself. This is a very well-developed game overall, and how it ties all of the concepts of the movie together into the game is just icing on the cake.

Which online casinos have Creature From the Black Lagoon?