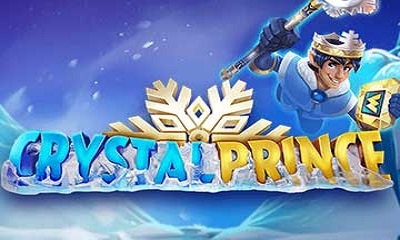 The Crystal Prince video slot by Quickspin brings players a minimum of 4,096 ways to win. Extra ways to get paid can happen on every single win. On top of that, free spins and other features add a tremendous amount of extra action.

An Introduction to Crystal Prince

One of the most popular things for slots fans is seeing tons of ways to get paid. This increases the hit-rate and the action level of the game. With the Crystal Prince online slot by Pragmatic Play, that’s exactly what you’ll get.

With a mix of a flexible format and value-packed features, the action and the tone here are both very strong.

Players will notice that the theme of the game doesn’t seem to stand out too much. It’s a fairly basic idea of a prince who has power over the ice. The wintery wonderland theme looks great, however, and it was handled in a way that makes plenty of sense.

With all of that said, the gameplay is the clear focus here. Quickspin very obviously went above and beyond to give players something exciting. It definitely worked, and that’s because everything from the regular hits on the base game to the way the features work bring out a whole lot of action and excitement. Additionally, it all comes together that makes sense without seeming forced.

The format for the Crystal Prince is pretty flexible with aspects that change to tie into the features. It’s a little different from most games with an all ways format. However, it’s not difficult to get used to. Here’s what to expect:

With a hit-rate as high as what you find in this game, the volatility is pretty much under control. It’s somewhere around the upper end of what we would call low, perhaps even a medium-low. In any case, the swings are fairly minimal, and a lot of small and medium wins happen on average.

The feature set for the Crystal Prince online slot offers a good amount of excitement and variety. For the most part, the features tie into the game’s overall format and concept pretty well. We’ll break down what to expect so that you go into this game knowing how things will go.

When you get any win on the game board, the size of the reels will increase by one space. This process can continue repeatedly to give players chances to win over and over again with more and more ways to win on each symbol drop, drastically increasing your opportunities as you go.

You’ll notice that the very top row of the game board has a frosted look to it. This is the Blizzard Seal. If you get your symbols all the way up to the top of it, you’ll activate the feature. During this feature, between one and three wild frost multiplier wilds will be added, and the blizzard mode will be activated.

During blizzard mode, you’ll have a few things locked in place. All winning symbols, all wilds, all bonus scatter symbols and all high payout symbols are locked in place. Unlocked symbols disappear to allow other symbols to fall in, and that gives a ton of big ways to win huge payouts.

It also makes it easier to hit the bonus scatters. As a result, it’s easier to hit the free spins mode. This is a cool feature of the Crystal Prince video slot that really shows how features can tie into a theme. Additionally, it’s a fairly unique idea that we can’t remember having been used quite like this.

During this free spins mode, you’ll get up to four different wilds added to the reels. This can include wild multipliers worth 2x or 3x. Additionally, you can re-trigger the free spins to add more to your total. The amounts are the same as above. However, just two of a kind of the scatters will add three extra free spins as well.

If multiple wild multipliers are a part of a winning combination, their values multiply by each other. For example, a 2x paired with a 3x will give a total multiplier of 6x.

How to Win at Crystal Prince

Winning at this game is all about adjusting to the volatility appropriately. With a medium-low volatility, you can adjust by increasing your bet size very slightly above what you’d normally use. Be careful not to over-adjust by betting too much. Something in the range of a 33 percent to 50 percent increase is plenty.

The idea of this adjustment is to take advantage of the relatively low swings. At the same time, you increase the value of your wins, so you get the best of both worlds.

The top-paying symbol is the prince from the name of the game. He has purple or violet hair, and he pays 2x for six of a kind. Note that this win, like all wins, are better than they first appear. This is because it’s really common to get several of the same winning combination at the same time. This is thanks to having a minimum of 4,096 ways to win on each turn.

The mid-tier symbols are four different gems. They pay 0.8x to 0.5x for six of a kind combinations. From there, things drop down slightly to four different snowflakes with various colors. They pay 0.30x to 0.25x for six. These are actually really nice looking symbols, and we’re impressed with how much care Quickspin obviously put into these symbols to make them look so good even though most software developers don’t.

The level of graphics for the Crystal Prince online slot is exceptional and enhances the entire play style, and the feature set includes several different additional ways to take down a win alongside the typical pay schedule offering. As a part of this software company’s selection of titles overall, this is a video slot that fills a key job because it is a good fit to many players.

In contrast with other online slots that use related overall themes, this video slot differentiates itself in a handful areas instead of just being like other online slots in the sub-genre. As if that wasn’t enough, the feature-focused gameplay experience of this game is centered around giving you a ton of action.