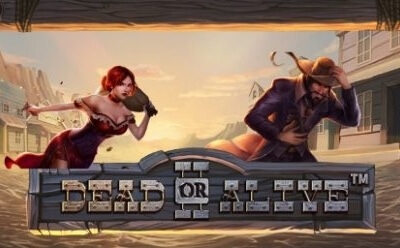 One of the most eagerly anticipated slot sequels – Dead or Alive 2 – has finally hit online casinos, offering Dead or Alive fans an exciting revamp of their beloved original. At first glance, the NetEnt team seem to have remained faithful to the first instalment, opting for subtle enhancements to give the new game a modern look. Add to that three rip-roaring Free Spins rounds and a massive jackpot potential, and players are surely in for an explosive gambling adventure. Read this review to find out whether Dead or Alive 2 can equal, or even surpass, its legendary prequel.

Casinos with Dead or Alive 2

Those familiar to the world of online slots will at least know of, and most likely will have already played, NetEnt’s 2009 epic Dead or Alive. Even after a decade in existence, this gun-toting game remains one of the most famous and indeed popular titles in a casino’s catalogue. And that’s despite the huge controversy that stormed the slot during its conversion from Flash to a HTML format early last year.

Fans were adamant that the game’s mathematical model had been tampered with. Yet the software giant still stands true to its initial response, resolutely denying any changes were made. To celebrate Dead or Alive’s 10 year anniversary, NetEnt finally heeded players’ calls for an updated version, delivering a sequel that intends to retain yet refresh all of the original’s winning charm.

The action takes place in the Wild West, on a dusty road framed by hanging posts. As expected from a developer of this calibre, the graphics and soundtrack are superb, particularly in the cut scenes, and the sound effects are as satisfying as ever. The symbols tip their hats to the original, which join low value 10s, Jacks, Queens, Kings and Aces with good old Western icons, such as cowboy boots, whiskey bottles and sheriff badges.

Five infamous outlaws represent the Wilds, which stick to their own reels and include: Apache the Kid, Della Rose, Jesse James, Belle Star and Billy the Kid. The highest value symbol is the Scatter (two crossed guns and a bull skull), which rewards lucky punters with 2,500 times their bet if they manage to land five in one spin.

As with the previous version, Dead or Alive 2 uses a 5-reel, 3-row format, and the same number of paylines, 9. One of the reasons for the original’s unprecedented popularity was of course its volatility and NetEnt have stayed true to form with their MAX concept, which will be explored later. Needless to say, gamers can enjoy this bad boy on desktop and through the Touch variant, ensuring effortless mobile play on the go.

Whilst the base game lacks anything especially riveting, all the excitement can be found in the game’s Free Spins features. Nailing three or more Scatters will whisk punters away to one of three different locations, each with their own volatility levels. The choice of game is left entirely up to the player, who is given 12 Free Spins to get them started. The various levels include:

The lowest variance option, the Train Heist racks up wins with an increasing multiplier. Every time a Wild lands, the multiplier increases by one, as shown in the meter, and an extra spin is awarded. If the meter makes it all the way to 16, the player is given five additional spins. Despite its low volatility, there is no limit to the multiplier, making sizeable jackpots a possibility for the lucky few.

Old school Dead or Alive fans are catered to in the saloon, which is technically the same as the original game. During this classic bonus round, every win is multiplied by two and Wilds remain sticky, meaning they are locked to the reel once they land. Nailing five outlaws will result in five extra spins.

Offering the highest variance, the final option employs NetEnt’s MAX concept, tempting hardcore fans with the potential of mammoth wins. The same features as in the Old Saloon apply, yet if two or more Sticky Wilds land on the reel, they multiply. For example, 2 Wilds will multiply the win by 2, 3 Wilds by 3, etc. Punters also receive five additional spins every time a Wild lands. This lucrative bonus round boasts one of the biggest non-progressive jackpots out there, with the possibility of returning more than 100,000 times the bet.

Creating sequels is always a tough ask, particularly when the original commands such respect and adoration. NetEnt have thankfully lived up to the task, by developing a game that can be enjoyed by both seasoned Dead or Alive pros and newcomers alike. Yes, the graphics and sound effects are excellent, but it is really the Free Spins rounds that elevate this cowboy classic to the next level. With its high volatility and staggering potential, a return to the Old West has never been so electrifying.

Which online casinos have Dead or Alive 2?