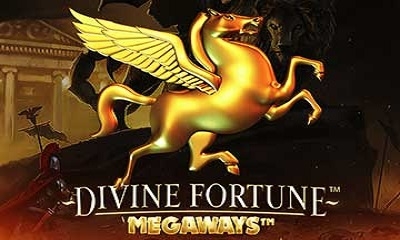 The Divine Fortune Megaways video slot from Net Entertainment is an updated sequel to the original title. This time around, you can win with thousands of winning ways on each spin. The ways to win is constantly changing, but you can be sure that there are always lots of them.

An Introduction to Divine Fortune Megaways

Players never seem to get tired of games that are built on themes central to Greek mythology. Something about the mythology of the time really speaks to people, and we can’t blame them. The Divine Fortune Megaways online slot plays into this perfectly with a gorgeous look.

If you like action, and you like games with a strong presentation, then this is a title that you will love.

Something that stands out as soon as you load this title up is just how good it looks. A lot of familiar characters and created are shown on the reels. You even see a beautiful view of Mount Olympus in the background. However, it’s the way that they’re presented that stands out so much at first.

And that’s until you see the action on the reels, which will capture your attention instead. You’re guaranteed thousands of ways to win on each turn, and that number can actually get up into the five-figure range pretty often. That’s great for players who like a high hit-rate and frequent small and medium payouts.

As the name implies, this title uses the Megaways format. We really like how it works because the action is varied but always intense. Here’s what to expect:

We also want to point out that this game’s volatility is in the medium-low range. It’s tempered a lot by the high hit-rate, which offers plenty of small and medium payouts. However, the features hold a lot of value themselves. That drives it up a bit and keeps it from being at a particularly low level overall.

The feature set for the Divine Fortune Megaways online slot is centered around taking advantage of the format. In particular, the way the features are triggered is really worth paying attention to. In any case, the action is very serious, and you’ll have plenty to look forward to as you play.

Wilds will not appear on every reel in this game. That’s because it makes the wilds too powerful with so many ways to win. However, what you will have are multiple featured based around wilds giving you extra value in other ways.

To start this off, we have the Falling Wilds Re-spins Feature. When you get a wild on the reels, and every payout is awarded as usual, you’ll trigger this feature. The wilds wills all shift downward one position, and a re-spin is triggered for all other spots on the game board.

These re-spins will keep coming over and over again. They only end when the wilds run all the way off of the bottom of the game board. What’s more is that new wilds appearing during the re-spins feature will prolong the re-spins even more.

This feature can happen during the regular game as well as the free spins mode that we cover below.

The Wild on Wild Feature is sort of an expansion of the above re-spins feature. If you have a wild symbol that would have appeared during a re-spin on a position that’s already occupied by a wild symbol, then you activate this feature.

The way this works is that it causes the wild to expand. It will expand in both directions, which covers every given position on the reel. Wins are awarded for that spin, and the re-spin feature continues with the wilds shifting down one spot each spin. With up to seven symbols available to land on a single reel, you can get up to seven wilds at a time with this feature.

The Divine Fortune Megaways video slot has a free spins mode as well. The hand holding a lightning bolt of Zeus is the scatter. It shows up on all reels, but you need at least four to trigger the free spins.

The first thing to know is that the scatters can trigger this feature no matter where they land. No matter the reels or position, four or more will trigger the free spins.

The second thing to know is that the free spins are worth more than regular spins. That’s every single wild that appears during this game mode activates the Wild on Wild expansion feature. This rolls right into the re-spins feature, so you get a ton of extra value.

How to Win at Divine Fortune Megaways

Getting the most from this game is all about managing your volatility. With it coming in at the medium-low level, what that is going to require is considering changing your bet size a bit to adjust. A ton of bet sizes are available, so these adjustments can be pretty detailed.

In short, it’s a good idea to increase your bet size by a small amount. Something in the range of an increase of 50 to 75 percent is plenty. The reason that this works is that the swings are going to be low enough to keep you from having big waves that wipe you out. At the same time, you’ll have better payouts since they’re based on multiples of your bet size as a whole.

Greek letters round out the rest of the pay table. The A symbol pays 0.7x, and the K and Q earn you 0.6x for six of a kind. You’ll also be able to score 0.5x for lining up six of the J or 10 symbols. It’s worth noting that the style of font makes the A look like a red triangle. We’re pointing this out to make it harder for players to get confused, but once you realize what it is, it really adds character to the game.

As a portion of Net Entertainment’s portfolio overall, the Divine Fortune Megaways online slot fills an important position because it is a good fit to a whole lot of people, and the theme is used in a particularly cool way in this game, which is opposed to it only being an afterthought like what we see in most slots. The set of features offers a number of various additional ways to win prizes on top of the normal pay schedule offering.

We truly love how the visual appeal gives you an overwhelmingly immersive play style contrasted to just being an afterthought. In addition to that, the feature-oriented gameplay style of this game is targeted toward giving slot fans a tremendous degree of excitement.