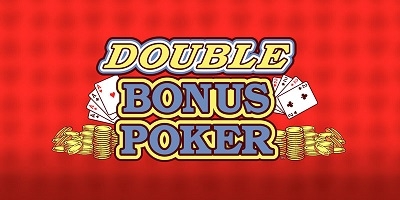 Double Double Bonus Poker video poker is one of the most popular non-wild styles of games in the entire genre, and it’s known for giving players balanced prizes at the bottom end of the pay table while offering special additional pays at the top end that give you more ways to win large sums in a single hand.

The online video poker market as a whole has a pretty decent selection when it comes to overall variety, but not every casino or software provider will have every game. In the case of Double Double Bonus Poker, it’s typically a title that you can find at virtually every reputable, top-tier site in the industry, and that makes it a good game to learn in general.

The strategies for this title aren’t hard to learn either, compared to other similar games, so it can be a viable alternative to something like Jacks or Better.

With that said, the real feature and drive behind this game is the staggered payouts for different ways of getting four of a kind. This adds value, which is compensated for by only one small concession at the lower end of the pay table, but it also adds a lot of excitement and more chances to take down a big win for your entire session just off the back of what happens on one hand.

The Rules and Game Procedure

The game procedure is pretty straightforward for this title, and it falls along the following lines:

There are two main decisions that you have to make here. The first is about your bet size, and the second is about which discards you have to play. This is enough to create a tremendous amount of strategy.

The most popular pay table for Double Double Bonus Poker video poker that you’ll find anywhere, online or in land-based casinos, is the following.

There are a few things to note about this pay table. First, this is known as the 9/6 pay table because of the payouts of the full house and the flush. Pay tables with lower values for these hands should not be played because they will give you a much lower payout rate. The payout rate for the 9/6 pay table, with correct play, is about 99 percent. That’s up there with the best that the industry has to offer.

It’s also worth noting that the amount of value added for the four of a kind bonus hands is extensive and has more of an intricate breakdown than other video poker games with similar motifs. The value added to these hands is primarily taken from the two pair payout being 1x instead of 2x.

Why Double Double Bonus Poker is Important in the Genre

The video poker genre as a whole is broken into two main categories: wild card games and non-wild card games. Wild card games are easy to make more volatility just because of the nature of hitting better hands on average with the extra ways to make winning combinations with the wild cards.

With non-wild cards, however, progressives are usually the games with the highest volatility, and then there is a large gap in the middle of the range until you get down to games like Jacks or Better that have a particularly low level of volatility.

Double Double Bonus Poker is an example of a game that largely fills that volatility gap.

It’s able to do this because it brings a higher level of volatility than most other titles in the genre, though it’s not quite as high as a title with a big progressive jackpot as its top prize. The end result is that you can get a more exciting and swing-filled experience without having to let the volatility get out of hand.

Strategy in Double Double Bonus Poker has two parts. The first is the betting, which requires that you play for five coins on each hand. It’s fine if you use a smaller coin size as needed, but playing with fewer than five coins makes your royal flush payout proportionately lower, and that has a terrible affect on your overall payout rate.

As far as general strategy goes, the main thing to realize is that small pairs lose a lot of their value since two pair hands pay the same as high pair hands. That payout for two pair being dropped down from 2x to 1x changes how you play a whole lot of hands that are just above high cards in terms of general strength.

For a quick example, suppose you have the hand AA88K. In most games, you’d keep AA88 and discard the K to have a two pair hand. In this situation, however, you should actually discard everything but the aces since the two eights don’t help to give you a better payout, and they actually make it more difficult to improve your hand to something that pays better than the 1x Jacks or Better win.

Overall, there’s a lot that’s similar with this game in terms of strategy with more common titles like Jacks or Better, but there’s also a fair amount that’s different, and learning to play in different ways and make adjustments when it’s appropriate to do so is key to getting the best payouts possible in this title.

Double Double Bonus Poker is a game with a serious following among video poker players because it combines the straightforward strategy and gameplay of other non-wild titles with chances for better payouts at the upper end of the pay table and a somewhat higher volatility. This adds a layer of excitement to the game that a lot of players miss from more tame games like Jacks or Better, and it brings it up to the level of volatility that you more typically see with games with wild cards in the deck.