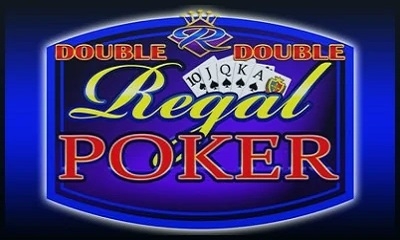 The Double Double Real Poker video poker games are known for having a staggered pay table. In this game, the four of a kind hands have a different set of wins available based on the cards. Some of these can be up there with the best payouts in the entire game for added action.

In the video poker world, there are lots of different pay table variations. The whole idea is to offer players something different so that it’s not always the same old thing. One way to do that is with wild cards. However, the Double Double Regal Poker games do it a bit differently.

Instead of using wilds, this game has a top-heavy pay table geared toward jackpot-like payouts.

The whole idea here is to make it really exciting to play because you never know when you’ll get paid with a really big win that would normally only be a moderately sized payout in other video poker titles. This is the kind of thing that both strategic and recreational players can get behind. On top of that, you’ll have a mostly normal pay table at the bottom end for a balanced experience.

The rule set and the way the game is played is not super difficult. However, we’re still going to walk through an example of how a hand can be played so that everyone knows exactly what to expect. This will be especially helpful for newer players.

As we mentioned above, this is not extremely complicated. However, you do want to pay attention to the bet sizing. This is an issue that we’ll get into further down below.

The hand rankings and payouts are a bit different in this game than what you’ll find anywhere else. In what follows, we’re going to list out the various hands along with their respective payouts in this game. Note that this does not strictly follow five-card poker hand rankings per se. Instead, they are staggered differently than what you’d see with those more typical rankings.

As you can tell, this is not simply a list of the typical poker hand rankings in order. What you’ll really want to pay attention to is that these hands are not listed in order of payout. Instead, they’re listed in order of strength.

In most video poker games, the higher paying hands get the best prizes. However, that’s not the case here, strictly speaking. For example, getting four of a kind is usually worse than getting a straight flush. Here, however, you’ll get at least the same payout if not better for four of a kind. This drastically changes some of the strategies involved when compared to other types of video poker.

There are two controls that help to determine the total amount of your wager in this game. The first is the size of the coins, and the second is the number of coins wagered. It’s this second control that we want to bring up here.

You have five options for the number of coins wagered: one, two, three, four or five. It would seem as if they are all the same in terms of your payouts since two coins gives twice the payouts as one, three gives thrice the payouts and so on. However, there is one piece of information that can be a bit tricky to pick up on if you aren’t looking for it.

To see it more clearly, consider the royal flush payouts for different numbers of coins:

What you’ll notice is that the royal flush payout when playing with five coins is much higher in proportion compared to the other hands. In the hand listing and their payouts that we gave up above, we normalized this to 800x. That’s much higher than the normalized payout of 250x for one through four coins.

As a result, it’s very important that you always play this game with five coins. That’s even the case if you have to drop the size of those individual coins down to something you’re more comfortable with. This will help to make sure that you get the highest potential payout rate available.

How to Win at Double Double Regal Poker

Strategy for Double Double Regal Poker is fairly in-depth. A part of it depends on how deep you want to go, but for the most part, it’s considered a highly strategic game with a whole lot that’s needed to be learned if you want to get the best payout rate available. This is aside from always playing with five coins, which we explained up above.

Essentially, the main thing you need to adjust to at the lower levels is two pair hands. Since the payout for two pair is the same for a single pair of jacks or better, you can end up in some pretty atypical situations from a strategic point of view.

For a simple example, consider being dealt a hand like AA884. In most video poker games, this would be an instant discard of the four on auto-pilot. However, that’s wrong when it comes to Double Double Regal Poker games. Instead, you should discard the 4 along with both of the 8s. This will give you an improved chance to pick up three of a kind or better and improve your payout. However, keeping the 8s limits that ability without actually giving you a better win.

With Double Double Regal Poker, players have an exciting game with a different style of play. We really like how much variety there is within the video poker realm. This game really shows just how much you can get out of a title without resorting to wild cards. While it looks much like other Jacks or Better variations on the surface, the strategies involved and the payouts that you can get make this game much more than what you’d typically get from non-wild video poker styles.