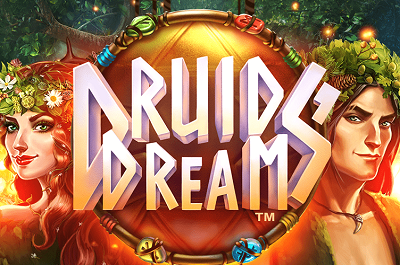 Net Entertainment’s Druids’ Dream video slot brings players out into a magical forest where some fantasy folks can help you to get re-spins, stacks of wild symbols, a free spins bonus round and more. The gameplay stands out in a major way in this 40-payling affair with tons of ways to get paid and a high hit-rate.

An Introduction to Druids’ Dream

The forest fantasy theme of the Druids’ Dream online slot is something that Net Entertainment has done very well. You’ll enter an entire new world out in a magical forest where lots of opportunities to win will come your way.

The visual appeal of this title is solid, but the way it blends in with the gameplay is even better.

The feature set is far enough outside of the box to be interesting without being so far outside of it that it makes it difficult to learn to play. The main game mode is based around getting a lot of small and medium wins for a high overall hit-rate, and this lends itself to a low volatility at the same time.

On the side of aesthetics, this is a title that looks amazing. It’s up there with the best games NetEnt has produced from a visual appeal perspective.

The betting setup for this game is really straightforward and easy to get used to. Here’s what to expect:

There’s a lot of flexibility with the betting here, and with such a high hit-rate and low volatility, you’ll probably want to experiment with different bet sizes to see what fits the best for you in this particular title.

This is to the extent that you may take a little while to get used to how high the hit-rate is, especially with how the “both ways” format, relatively high number of paylines and overall feature set come together.

As you’ll see below, the gameplay of the Druids’ Dream video slot centers largely around wilds and chances for extra spins and ways to get paid. This is very consistent with the overall high hit-rate play style.

The wilds in this game look like golden orbs with the word “wild” spelled out across them. They are really the key to the entire game in terms of overall style and how the gameplay unfolds. You can have them show up stacked on the second and fourth reels while they show up normally on the first, third and fifth reels.

They can also give you the following payouts, expressed in coins:

What’s really important to note here is that, because there are stacked wilds on two of the reels, getting combinations like this almost guarantees that you’ll win with them in multiple ways on the same spin. This means that you’ll get paid, on average, much more than these payouts would otherwise seem to indicate.

We also want to note that the wilds become stacked on the middle reel during the free spins as well.

There are three scatters that can appear on different reels for different reasons. The man can show up on the second with the woman on the fourth, and they appear during the regular game mode as well as the free spins.

The bear, however, only shows up during the free spins mode and only in the third reel.

These symbols are always attached to sets of wilds, and they substitute for wilds and any other symbol in the game as well. However, the regular wilds do not count as scatters for the sake of triggering features.

In the regular game, if you get a full stack of wilds with a scatter on the second or fourth reel, you’ll activate the Druids’ Dream online slot’s re-spin mode. Each wild on that given reel gives you a re-spin, and they will stay in place until all of the re-spins are over while everything else spins.

Once again, this plays into the game giving you lots of ways to get paid over and over again. This contributes to the high hit-rate.

Along similar lines, there is a nudge feature that can help you to trigger the re-spins. You can get this feature if you get a reel full of wilds without the scatter showing.

While the re-spins and stacked wilds are the features that are relevant the most often, it’s the free spins mode that probably gives the most value in terms of a single shot.

When you get both scatters on the second and fourth reels at the same time, then you activate this feature.

You’re given an extra spin on top of what you’re initially granted for each charged wild that appears in the stack with the scatters as well.

One of the main reasons that this feature gives you so much extra value is that the scatters turn into wilds, and along with the other wilds used to trigger the feature on the second and third reels, will all stay on the game board during the entire feature. That makes it a lot easier to hit winning payouts, especially since you get additional stacked wilds on the third reel during this bonus round.

How to Win at Druids’ Dream

The key to forming a good strategy for this game that you’ll be happy with is to recognize that the overall volatility is really low while the hit-rate is really high.

Once you have this in mind, you can see why moving to a somewhat larger coin size than you would normally use is the way to go. The low volatility will keep the swings from getting into uncomfortable territory, and your average wins during the regular game mode will be worth more in the meantime.

This game has a pretty flat pay structure as a part of the style of play that it brings to the table. You’ll have a 100x win available for five of the white wolf (same as the wilds), and you can also pick up 60x for five of the owl symbol.

Moving down, the drum and flute symbols pay 22x and 20x, respectively, for five on a payline. Moreover, wins of 12x to 6x are yours for five of a kind of the red, yellow, green or blue runes.

A key component of this game is the fact that everything from the feature set to the layout is designed around a high hit-rate. If that’s the style of play that you prefer, then the Druids’ Dream online slot by Net Entertainment could easily become one of your favorites.

On top of the excellent gameplay values, the aesthetic appeal is very serious here as well with a forest fantasy world that looks tremendous.

Which online casinos have Druids Dream?