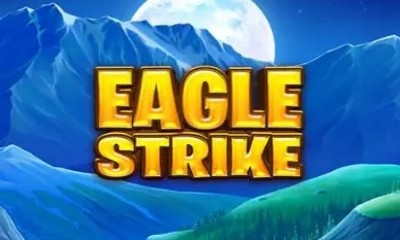 The North American wilderness is the scene for the Eagle Strike online slot. Out in one of the last frontiers, players can take down a hold and win feature as well as a great free spins round. This is on top of wilds, scatters, tumbles and other ways to add more prizes to your bankroll.

An Introduction to the Eagle Strike Slot

Online slots based around the outdoors of North America are pretty popular. The Sizzling Kingdom Bison slot is a great case of what we mean. However, Iron Dog Studio slots often take on popular sub-genres like this one and put their own twist on them. This is precisely what we see with the Eagle Strike video slot.

In true Iron Dog Studio fashion, this game is completely packed with different types of features.

Some slot developers have a philosophy about holding back in their games. They can be worried that if they put too many features in a slot that none of them will stand out. Iron Dog Studio apparently didn’t get that particular memo. Instead, they jammed about as many features in this title as they feasibly could. It’s no surprise then that the feature set is what everything revolves around on the gameplay side. However, this includes both bonus rounds and mechanics that trigger in the regular mode.

Graphically, this game doesn’t take on a lot of the mystical elements that you sometimes see with titles with these themes. Instead, the focus is more on the wildlife aspect of the situation. That seems apparent when you look at the name, but names can be deceiving. In any case, a handful of popular animals from the area are the focus on the reels. Additionally, a gorgeous view of what are most likely supposed to be the Rocky Mountains are in the background.

One thing they did in this game that we like is that the format is super straightforward. Many developers try to come up with something new to get the attention of players with each game. Iron Dog Studio doesn’t need to do that. Instead, they packed it with features and made it look great with exciting play. Regardless, here’s what you want to know when you start playing:

The volatility here is around average despite all of the features. Another game that does this in a similar way is Primal Wilderness. Additionally, it has a similar theme based around the North American wilderness with more of a focus on the animal and landscape side of things. Regardless, with a balanced volatility, you don’t have to worry about excessive swings on average.

Without the typical payline structure in place, Iron Dog Studio went with a betting setup where wins are a multiple of the total amount you have wagered. That makes it a lot easier to have an idea of how much different combinations will pay. Additionally, it makes it less hassle than having to count out coin numbers, coin values, how many coins per line and a bunch of other mental math.

Gameplay and Features for the Eagle Strike Video Slot

As we mentioned before, the features are the name of the game here. You’ll find plenty of them in the Eagle Strike online slot. Along these lines, it can be tricky to hop into this title without knowing what to expect. As such, we recommend checking out our feature breakdowns and explanations below. They will help you to anticipate what can happen and not be thrown off guard by the possibilities.

The eagle from the title of the game is the wild symbol. He also shows up on the second, third and fourth reels only. As such, he does not get his own winning combinations. However, that doesn’t matter so much because of how he can work with some of the other game mechanics. We’ll get more into that below.

He will substitute for everything but the scatters and nugget symbols. Additionally, we will note that he can expand in the free spins but not in the main game.

A straightforward tumble feature is included in the Eagle Strike video slot. Winning combinations are paid before the symbols that make them up disappear. Accordingly, new symbols fall down in place. These new symbols give an opportunities for additional payouts and prizes. What’s more is that you can trigger this over and over again for even more wins.

This feature helps to add more value to the average win while also making the wilds more useful.

The Eagle Strike free spins mode is triggered for three or more of the claw marks on the reels simultaneously. With that said, you get different numbers of free turns based on the number of scatters. Here’s what things look like when you start out:

As mentioned up above, the wilds expand during this feature. Additionally, you can pick up more scatters for extra free spins. Landing three, four or five scatters will add four, six or ten free turns to your total. However, no limit has been placed on the number of free spins you can get in total per feature trigger.

Nugget Symbols and the Hold and Win Feature

When you see nuggets on the game board, they can be two types. One is a strike nugget with a mark on it, and the other is a golden nugget in a bit of a darker color. The strike nuggets can pay as scatters as follows:

These reflect the three static jackpots shown at the top of the game board. However, six or more nuggets in total take you to the Hold and Win feature.

Players start off with three re-spins, and all of the nuggets stick in place based on their starting positions. From there, the reels can re-spin for a chance for more nuggets to stick. If they do, your re-spins are reset back to a total of three. However, if you run out of re-spins or fill the board, the game ends.

Each golden nugget gives an instant win, and the strike nuggets can pay according to the payouts above. Additionally, if you fill all 15 spots with nuggets, your wins are doubled in size.

How to Win at Eagle Strike

With its average volatility, there isn’t really a lot that players need to do to adjust here. Instead, we suggest just choosing a bet size that fits what you’re comfortable with. However, this is easier than usual because of how many different increments are available. As such, you should be able to find a sizing that fits about as perfectly as possible.

With this said, we do want to encourage players to change bet sizes as they go if that’s what they need. Sometimes a level or two up or down can be more comfortable than where you start. This is all a part of the normal feeling out process for slots like this.

Since the eagle is wild, three other gorgeous animals round out the top end of the payouts. This includes 50x for five of the cougar feature. Additionally, players can earn 40x for five of the deer. The buffalo, a staple in games with this type of theme, earns 30x for five of a kind combinations. However, we should point out that all three of these pay for just two of a kind. Helping to trigger the tumble feature so easily isn’t something that should be overlooked.

For the card rank symbols lower down, at least three are always needed for a win. Regardless of that, the yellow A gets you 15x for five. Additionally, players can pick up 12x prizes for five of the red K or purple Q. This drops down to the 8x level for five of the blue J, and it drops once more to 6x for five of the green 10 or violet 9 symbols.

From a visual standpoint, the Eagle Strike slot reminds us a bit of the Wolf Call game. However, it has more features than this game and most others in the sub-genre. To this end, we have to say that the feature-rich play is balanced out really well. Iron Dog Studio did this by making sure the volatility doesn’t get too high or out of balance. We think they did a good job and that this game should subsequently please most slot fans.

Which online casinos have Eagle Strike?

What is the Return to Player (RTP) for Eagle Strike?