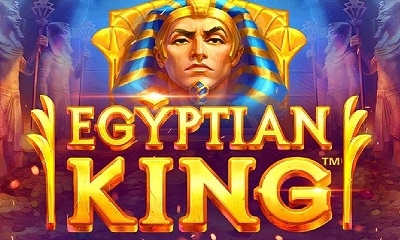 iSoftBet’s Egyptian King online slot uses a larger format than usual to give players tons of extra action while they shoot for a free spins mode and a different re-spin mode with chances to run up some very serious payouts. The graphics are super solid, and the pay schedule offers a balanced set of affairs while you shoot for the larger feature-based wins.

An Introduction to Egyptian King

When you see an online slot that’s based on a theme that you’ve seen several times before, you tend to have a bit of reaction that if that game doesn’t blow the others out of the water, then you’re not really going to be that interested in it.

This game is obviously based on an Egyptian theme, but it’s been done in a way that every aspect of this slot delivers.

Visually, this title brings players a ton of excitement because it’s very aesthetically pleasing with a high-quality style of graphics that incorporate a lot of different types of related symbols without falling back on a pure mythology-based concept.

In terms of gameplay, there are some strong features and a balanced pay table with plenty of wins at all levels and chances to run up some pretty significant prizes in the bonus rounds.

It’s easy to see from your first glance that this game does not have a fully standard format. However, it’s not that far outside of the box, and here’s what you can expect:

Long story short, it plays like a pretty standard 5×3 game with 20 paylines except there is more room on the middle three reels to catch scatters, which is something that makes it easier to activate a bonus feature like what we’ll describe down below.

The features in this slot are primarily based around a couple of bonus rounds. However, because they vary from each other quite a bit, and because the regular pay table offers so much value, you’re not going to be bored at all by shooting for these rounds during your sessions.

There’s a pharaoh symbol that can appear on any reel, and it’s the wild in this game. There are two versions of it, and one of it is completely gold and only appears in features as an extra wild, but they both cooperate together just the same.

The wins for combinations of just of this wild are as follows:

These are some pretty significant wins, especially considering those wilds would almost certainly help you to pick up other paying combinations as well. That’s a sort of compounded type of value that we like to see in games where certain features can give you value in multiple ways, and you’ll see that even further with how the wilds help you more in the bonus rounds.

A fairly straightforward free spins mode can be activated when you get three of the bonus symbols on the center three reels. They can land anywhere, and these bonus symbols look like pyramids with the word “bonus” across them in blue letters.

You’ll receive 10 free spins when you get this feature, and you will get a couple of perks during this round that give it more value than the regular game mode. First, you can receive random multipliers of 2x or 3x to your wins. That’s a significant increase in value on its own, but that’s not all there is.

Golden wild symbols can appear on the reels as well.

These golden wilds will stay in place for the rest of the free spins mode, and that obviously makes it easier to get payouts than what you’d normally have going on in the regular game. It’s also worth noting that for each golden wild that appears, a low-value symbol will be completely removed from the reels for the rest of the feature.

This is a combination of free spin perks that we can confidently say that we’ve never seen before, and it shows how much thought went into crafting this side of the Egyptian King video slot.

There’s a purple amulet symbol with gold trim that can make appearances on the first and fifth reels. These award you a set of three Pharaoh Re-spins whenever you get both of them on the reels at the same time.

The way this works is that extra wilds can be added on each re-spin, and wilds will stay on the reels (though they can move around position) after each re-spin as well. The idea is to allow you to accumulate several wild pharaoh symbols (which creates the name of the feature) in order to maximize your chances of hitting winning combinations.

How to Win at Egyptian King

Something interesting about this game is that despite the fact that the bonus features hold a whole lot of value, the regular pay table also has a lot of value, so you get a pretty balanced experience.

As a result of this dynamic, you can play with a larger bet size than you normally would and have swings that are similar to a lower bet size.

There are essentially three tiers of payouts in this game, and it starts with the four animal symbols. They’re actually centered around different Egyptian deities, but that’s never really referenced in the game. The four animals are as follows:

Two symbols make up the middle range with a 100x payout for five of the Eye of Horus and a 80x win for five of a kind combinations of the colorful scarab.

Finally, we have the low-tier wins with royal card rank symbols. The purple A and red K pay 50x for five, and you can earn 30x for five of the yellow Q or green J.

With the Egyptian King slot, iSoftBet did a tremendous job of giving players both a very strong presentation and a strong, feature-oriented gameplay style. They’ve made this title stand out a lot from others in the Egyptian-themed sub-genre, and the action is set up in a way that it will appeal to a wide range of slot fans since the volatility isn’t too low or too high, and there’s a good balance in the winnings found between the features and the regular game mode.

Which online casinos have Egyptian King?