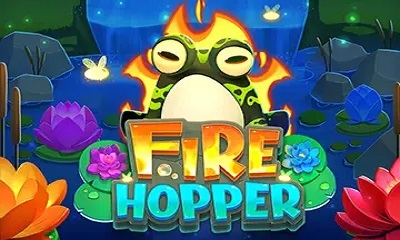 The Fire Hopper video slot from Push Gaming is a relaxing, casual game-style title. It’s based on a set of frogs that help you to get extra wins in this cluster-based slot. With a slow-paced experience, you can sit back and relax while also having chances to win some sizable prizes.

An Introduction to Fire Hopper

One of the sub-genres of video slots we think is under-served is the set of games for people who love relaxing, casual styles of play. It seems like the vast majority of titles in the modern era are centered around more serious themes.

However, Push Gaming has tackled this sub-genre in a major way with their Fire Hopper online slot.

You start off in this game with an overhead view of a pond. On this pond, you’ll see a variety of different lily pads with different colors of flowers blooming. They are all beautifully drawn, but the graphics aren’t so intense that it makes the game difficult to relax with. Additionally, you’ll occasionally see special symbols and fun frogs on the reels. They’re the key to the features.

Speaking of features, they’re a core part of the gameplay. However, they aren’t very jolting like what you find in most other titles. That would bring players out of the relaxed, casual style of play that Push Gaming was aiming for here. Instead, everything is centered around the regular gameplay mode and additions made to it in order to give players a better value. Even when the bonus features trigger, they flow from one to the other in a really smooth way.

At the core of this title is an atypical style of format. If you’re familiar with cluster-based games, you’ll have a little bit of a leg up in understanding how this title works. However, even if you don’t, it’s not super complicated once you see it play out for a couple of spins. Here’s what you need to know to get started:

You will have a medium-low volatility in this game. That’s because the hit-rate is high and the features are really balanced. Additionally, payouts are based on multiples of the total bet size for convenience. They don’t break things down into coins or other fractional denominations here.

With the Fire Hopper online slot, everything is about having a smooth, relaxing experience for the most part. The features add a lot of value while you play. However, they’re set up and handled in a way that doesn’t really break you out of that smooth experience. We love how they handled this approach, and we’ll break down how these features achieve this and how the general gameplay flows in the following.

The very first thing you need to know about playing this game is that the cascade feature triggers a lot. That’s because it triggers with every single win. Likewise, it can trigger multiple times in the same paid spin, which adds to the overall hit-rate and smoothness of the gameplay.

Push Gaming’s implementation of this feature here is cooler than what we sometimes find elsewhere. The basic idea is the same, however. When you get wins, the winning symbols disappear after paying (with some exceptions, see below). However, new symbols then fall down into place until the grid is filled back to its 49-spot starting level.

That gives you a new chance to pick up wins. What’s cool is that you can then trigger it again with more wins, and the process repeats. Additionally, Push Gaming has put no limit on the number of cascades you can get per turn. That means you can end up with tons of different wins all due to the same paid spin.

The frogs are the wilds in this game. They do not appear in a way that allows for clusters of only wilds, however. A part of this is how they only appear spaced out for the most part. However, another part is that all wins need at least one non-wild to be a part of the combination. That limits the game in a way that doesn’t allow for wild-only paid clusters.

With that said, these wild frogs do have the ability to count as a part of different paid clusters at the same time. Additionally, something that’s really important (and atypical) is that they do not disappear as a part of the cascade feature. They also don’t fall down. Instead, they simply maintain their current position, and other symbols can fall down through them to fill gaps below them if need be.

These wild frogs are also key to certain other features. As such, they come in two varieties. You can have a regular version in green, but a golden version is also available.

The Leaping Frog feature does two things for you that add value. However, learning how to trigger it is the first thing to know because it doesn’t work in a typical way.

The firefly symbol is the key to triggering this feature.

The firefly doesn’t give payouts on its own. However, if it appears anywhere on the game board at the same time as a wild frog symbol, it triggers the Leaping Frog feature. The frog will leap over to each firefly on the game board, which does two things:

It’s important to note that there are two different firefly symbols. One has a golden bonus frame around it. When those are collected with the Leaping Frog feature, it is collected and counted toward a bonus feature.

Instant win symbols can appear anywhere on the game board. They are simple circular symbols in the Fire Hopper video slot that include a number on them. This number is a multiple of your entire bet. However, you can only win it if it appears on the screen with a frog at the same time.

The Leaping Frog feature is triggered in the same way with these instant wins. They work the same as the fireflies with the multipliers and extra wilds that take their position when the frogs hop.

Each bonus firefly that is collected give you a set of seven free spins. You don’t really get anything special to go along with these free spins. Instead, they just give an extra bit of value along with the other features. We like how this was included in a very balanced way that doesn’t break up the smoothness and relaxing style of the gameplay.

How to Win at Fire Hopper

As you can see from the payouts below and the features above, everything is set up to avoid a lot of big swings for the most part in this title. However, as a result, you end up with a volatility that’s quite a bit below average.

If you want this slow-paced, relaxed style, that’s completely fine. Alternatively, you can increase your bet size by about 33 percent or so. The swings will still be relatively easy to handle, but this betting adjustment will increase the relative volatility compared to your original bet size. This makes the game play with swings that are effectively larger than the below-average starting point.

Any cluster in this game that’s at least 20 spots will give you the best payout available for the symbol in question. Additionally, the symbols in this game are visually ranked from “hottest” to “coldest” in terms of color. That means the red is the best-paying lily pad flower color with a 200x win for 20 of a kind or more. The orange is not far behind at the 100x level, and the pink gives you 50x for 20+ matching symbols.

However, the last three symbols all have the same payout size. It’s 25x for 20+ clusters for the purple, green or blue flowers.

If you have liked other video slots that use this style of gameplay, then this is a game you definitely will not want to miss out on, as the action is definitely raised up by the overwhelming level to which the aesthetic appeal is suited for the Fire Hopper online slot’s play style. As part of Push Gaming’s selection of slots overall, this is a title that fills a key position since it is a good fit to so many people.

The feature set offers a number of different extra ways to take down a win on top of the normal pay table. Additionally, the gameplay experience is something that is focused on action with a serious amount of opportunities to hit reasonable payouts while still being relaxing.

Which online casinos have Fire Hopper?

What is the Return to Player (RTP) for Fire Hopper?