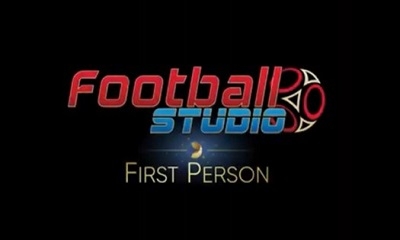 A live dealer game based around evenly matched football teams scoring on each other is what you’ll find here. The First Person Football Studio tables are all about trying to see which team is running hot. You’ll have a very quick style of gameplay and a lot of action with this title.

There’s a sizable range of live dealer games out there that fit the typical concepts and expectations. However, Evolution Gaming likes to throw out something different sometimes. That’s exactly the case with First Person Football Studio.

When is the last time you saw a live dealer game based around a popular sport?

The idea is pretty straightforward and easy to get started with. Just because it’s something different doesn’t mean that it’s too complicated to learn quickly. This helps players to see how it works and jump right in sooner rather than later.

From a presentation standpoint, it looks tremendous. Evolution Gaming always has a high level of visual appeal with their games, and this title is no exception. We really love how it’s set up to have an immersive football environment with the field and lights. We also enjoy Evolution Gaming’s high-quality dealers and how they bring the game alive.

A Note About Sports Betting

We want to be clear about something from the beginning with this game. This will help to avoid misconceptions and mistaken assumptions. Here’s one thing to know: This is not a sports betting game. No sporting contests are actually taking place, nor are any being wagered on.

Instead, things are simulated with a deck of cards. They’re played from a shoe of multiple decks. However, it uses the standard 52-card French decks that are used in so many other titles. We wanted to point this out because the name of the game and concept used can accidentally lead to some confusing and mistaken expectations with what this option actually brings to the table.

With that said, let’s check out what really brings this game into the fold with so much action.

When you’re seeking out casinos for this game in particular, you’ll obviously want to go with sites that offer the Evolution Gaming portfolio of live dealer games. However, you should also try to find casinos that have a great reputation, which includes all of the ones we have reviewed ourselves. Furthermore, finding casinos with live dealer promotions and bonuses will help to effectively lower the house advantage in your play.

The easiest way to get familiar with First Person Football Studio is to know how the screen is laid out. There’s a lot going on when you look at the screen, and we want to make sure that you know what is where when you get started. Keep in mind once again that it’s not particularly complicated once you see it a couple of times. However, it can be slightly intimidating when you start simply because it’s something new.

There are basically two parts of the screen. The game itself plays out in the top two-thirds. Likewise, the controls and displays for the table are in the bottom one-third. Along the left-hand side is also an updated list of winners at the table for different amounts.

The bottom-left portion of the screen show recent football scores. These are football games happening in real life. However, they have no bearing on the game being played here whatsoever.

With the bottom-right section, you’ll see a history of the past 24 plays of the game. This shows whether the home or away team won. Home is always red, and away is always blue. A tan color has been chosen for draws. We’ll get into how each team wins down below.

Finally, in the middle part of the screen, you’ll see a betting control. Different sizes of chips are available ranging from €1 to €1,000 apiece. The betting range for this game, displayed in the top-left corner, is typically €1 to €5,000. Above the chip selection are three spaces for you to place your virtual chips. These reflect the home, away and draw options.

That’s really everything you need to know about how the game is laid out. Now we’ll get into the actual gameplay procedure.

The gameplay procedure for First Person Football Studio is quick. This allows for several rounds to be played during your sessions. However, what’s great about this game is that you don’t have to play at such a fast pace. Instead, you have the option to only place bets on certain rounds. This makes it easy to pick a pace that works the best for you.

Here’s a quick example of how the game rounds go. This will give you an idea of what to expect once you sit down to play:

Because there’s not a lot that the dealer has to do with the dealing of the cards, you don’t have much time being spent up with unnecessary motions and managing the game. That’s the core reason that this game proceeds at such a quick pace.

You have three options to choose from. Here we’ll briefly describe each one and what you can expect from each:

The betting for this game is pretty easy to get used to. Players will typically try to figure out which side is on a hot streak or which is due for a win. That’s what the chat functions and history functions help to do.

How to Win at First Person Football Studio

From a strategic standpoint, there’s not a lot to do in this game. Simply pick between the home and away wagers based on whichever you think will come. However, staying away from the draw wager would be a good idea.

It’s worth noting that some people mistakenly think that this title would be vulnerable to card counting. The reason it’s not, even though it’s a live dealer game, is because of how the deal is executed. You don’t get to make any strategic decisions after you’ve seen some of the cards. With the cards only going up against themselves in a symmetrical fashion, that leaves card counting as a useless gesture.

We really love the first person aspect of this game. It gives the whole experience a different level of immersion that you don’t find with many titles. Between the fast action and how easy it is to get started playing First Person Football Studio for the first time, it’s easy to see why it has such a serious following. It’s the perfect game for someone who wants something quick, easy and social.