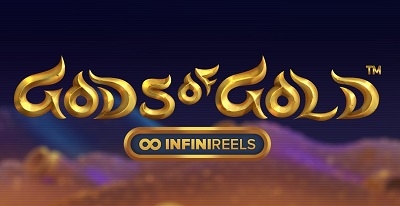 Net Entertainment’s Gods of Gold INFINIREELS video slot introduces a new gameplay dynamic that we have never seen before. It’s a spin on the all ways format that allows chances for new reels to be added over and over for winning combinations that aren’t limited in site with features that match this new layout idea.

Casinos with Gods of Gold INFINIREELS

An Introduction to Gods of Gold INFINIREELS

There are certain things in the video slot world that we take for granted. One of those things is that there are a given number of total reels for the game that inherently limit what the maximum sizes of the available payouts can actually be.

Net Entertainment has blown this concept out of the water with their Gods of Gold INFINIREELS online slot.

The idea here is to give players a plausible way to not have any maximums on the sizes of combinations that they can make with an infinite number of possible reels on any given spin. The whole concept is really interesting and offers some extremely exciting gameplay.

While the format is obviously going to get most of the attention here, we should point out that the theme is pretty cool as well. It has a bit of an Arabic or Egyptian kind of feel to it with royalty, gold and glowing gems all over the reels.

As we mentioned above, the layout is getting a lot of attention, and it can be anti-intuitive at first. However, we’ll break down what to expect here so that you understand what’s going on.

The concept here is a little weird on paper, but once you start playing, it makes total sense. The game can be mistaken for a classic slot at first because you only see three reels, but once you pick up several reels at once for a winning combination, you quickly come to understand that this is not the case.

While the format is the star of the show, it’s the features that center around this format that really make the Gods of Gold INFINIREELS online slot shine.

The addition of extra reels increases the sizes of your wins. Because there is no maximum to the size of payout you can get in theory, there is literally an infinite available number of reels and ways to win. With that said, they needed a way to calculate the win available for larger payouts that players can easily understand, and they arrived at the following.

If you look at the five of a kind win size, it will double to give you the six of a kind win, double again for seven of a kind and so on.

These are further multiplied by the number of matching symbols that you have on a given reel, which is important because they show up stacked sometimes. Having stacked symbols like this just multiplies your payouts even further within the context of an “all ways” format game.

The symbol with a golden sun with a pearl in the middle is a scattered bonus feature. If you get at least three of them on the reels at once by the conclusion of a given turn, then you will get a win spins feature.

You will be given 10 win spins for activating the feature, and an additional 5 win spins are given for each extra scatter beyond three that is used to activate the bonus round.

There is a guaranteed payout on every win spin, which is made even more important by the extra reels available in the Gods of Gold INFINIREELS video slot. Each win spin starts back at the usual 3×3 layout.

There is a golden symbol that looks a bit like wings in front of a blue background with a purple diamond-shaped symbol in the center. This is the wild symbol.

In an all ways format game, it’ll obviously have a lot of value. However, in this slot, it does not have its own winning combinations because it does not appear on the first three reels. Instead, it will appear on the fourth reel and every reel after.

This isn’t so much of a feature as it is a key element of the gameplay. Because you can end up with several reels active on a given spin with the way the INFINIREELS layout works, there is a minimap shown at the bottom of the screen.

This will highlight all reels instead of just the ones that are on the screen immediately (only a certain number are shown to avoid them being too small to see normally). This minimap will have winning symbols highlighted according to a simple system that makes it really easy to see where your wins are coming from, and that also includes special markers for both wilds and scatters to make them easier to keep up with.

How to Win at Gods of Gold INFINIREELS

The volatility of this game is fairly low, and that’s kind of tricky to figure out because of how the game is set up with the incredibly atypical format.

The thing to understand, however, is that the hit-rate is pretty high with a lot of small and medium wins, but you still have opportunities to hit some really huge pays if you get enough reels because of how the wins double for each reel once the combinations start to get long.

There are essentially two tiers of symbols in this game. The first symbols are more or less characters, and the second tier is made up of gem-based symbols.

We’re going to list five of a kind wins for the key symbols and show you how to calculate your wins for bigger combinations, and this starts with the man in the red hate who pays 5x for five of a kind. The woman in purple gets you 2x for five, and five of the bull is worth 1.5x. Five of the bird character symbol gets you 1x.

From there, the light purple and dark purple gems are each worth 0.3x and 0.25x, respectively. You then have the green and blue gems worth 0.2x and 0.15x for five of a kind combinations.

Net Entertainment has done something very special with the Gods of Gold INFINIREELS video slot. They have created a new style of game that’s still very solidly a video slot while giving the gameplay something it’s never seen before. We’ll be very surprised if this type of format doesn’t become fashionable in the greater slots industry because it’s a really good idea that leads to tremendous levels of action.

Which online casinos have Gods of Gold INFINIREELS?