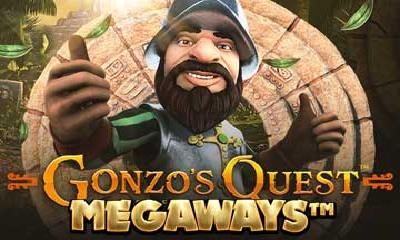 Net Entertainment’s Gonzo’s Quest Megaways is an expanded version of the original with more ways to win but a lot of similar features. The look has been updated as well, and this really feels like a completely different title instead of an addition onto an already existing game because so much is different despite the similarities.

An Introduction to Gonzo’s Quest Megaways

This game is available through Net Entertainment-powered online casinos, but it was actually produced in conjunction with Red Tiger Gaming, which makes this a super solid collaboration. As you can tell from the first time you look at the game, it has an excellent visual appeal, and it uses the 3-D graphics that some of NetEnt’s top games have become known for.

Despite this game looking so great, it’s amazingly the gameplay that shines the most just because of how much there is going into it.

Action is the order of the day if you hop into this slot because everything is set up to give players a ton of wins. Not only that, but you have a whole lot of opportunities to run up multiple wins on a given spin, so you’re getting a pay schedule that centers around a super high hit-rate and sizable wins.

This game’s format can be a little confusing if you aren’t familiar with the Megaways approach to things, but it’s pretty intuitive to figure out if you read the following and get in on the action for just a few spins. Here’s what to expect:

This title has a lot going on, but even with that, it’s pretty straightforward to learn to play. The features are pretty intuitive, and there are only a few gameplay mechanics that may catch you by surprise the first couple of times while you’re learning the format that will stand out as being atypical.

The volatility of this game is also in the medium-low range, so there isn’t much to worry about when it comes to sizable swings or anything like that.

The feature set for the Gonzo’s Quest Megaways video slot is very impressive, and it’s one of the more feature-rich games out there in terms of titles that don’t make you wait for different types of bonus rounds to give you features. Here we’ll show you everything that you need to know to get started.

One of the features you’ll hit the most often in this game is the Avalanche Multiplier feature. This feature hits every single time you get a win, and with a sizable hit-rate for this slot, it’s clear that this feature is something that you’ll become very familiar with very quickly.

When you get a win, it’s paid out normally. However, once that pay is added to your balance, you’ll see all of the symbols that were involved with a winning combination explode to allow new symbols to fall down into place. This gives you another opportunity to get wins, but it also increases the multiplier on those wins along the following lines:

As you can see, the wins rack up pretty quickly and become sizable with just a few falls in a row. This process continues until you have a game board with no new wins, and that means you go back to a normal spin.

The wild symbols are a golden question mark, and they’re really important for this game even though they show up in kind of an atypical way.

The game is set up so that you can get up to two wilds on the game board at any given time. The first wild is in the first three reels, and the second is in the last three reels.

Wilds are absolutely critical in games with a Megaways format because they offer so many opportunities to get paid compared to what you see with more traditional formats. In this case, you can get up to two of them, which is more than many titles with this type of format are allowed to have, so the wins they can give you can definitely get up there in size.

It’s also really important o note that the wilds do not explode and get out of the way when they show up as a part of a win, so they persist through all of the avalanches on a given turn.

The symbols fall from the top of the game board instead of having reels spin from a visual standpoint. This means that the Gonzo’s Quest Megaways online slot bonus feature is called free falls instead of free spins.

To trigger this feature, you’ll need to get at least three of a kind of the free fall symbols from left to right on consecutive reels. The free fall symbols have golden faces on a round symbol that look somewhat like a compass. Thankfully, the wilds can count as scatters in this case.

Note that these symbols have to fall on at least three reels to trigger, and the number of spins you get is determined by the number of consecutive reels, from left to right, they fall on.

Your number of free falls is determined as follows:

During this bonus feature, all wins are multiplied by a factor of three. This effectively makes the multipliers for the different levels of avalanches 3x, 6x, 9x and 15x. You don’t need us to tell you that there’s a whole lot more value in that feature than what you find during the normal game mode, but it all comes from the same fundamental style of gameplay.

Finally, we have one more feature to cover. On any given spin, you can trigger the Earthquake feature. The way this works is that the reels will shake, and all low-tier symbols will be destroyed like how winning symbols are destroyed for the avalanche feature.

Not only does this allow new symbols to fall into place, but only high-level symbols will fall, which drastically increases your chances of hitting winning combinations and payouts.

How to Win at Gonzo’s Quest Megaways

The best adjustment that you can make to this game centers around the idea that the volatility is on the lower end of the scale. While it’s not super low, it’s in the medium-low range, which means you have room to manipulate your bet size without the swings being too severe.

We think that something in the range of increasing your bet size by about 50 percent is suitable here. Alternatively, you can just pick a size that’s at the upper end of what you’re comfortable with. The low volatility will help protect you from any long swings, and your wins will be much larger as a result of increasing the size of your wager.

All of your payouts in this slot are multiples of your overall bet size. Things start with the upper-tier mask symbols, and the one with the red headdress and earrings is the best-paying symbol of them all with a 15x win for six of a kind. The blue mask pays 4x for six, and six of the green mask gets you 2x. You can win 1.2x or 1x for six of the red or gray masks.

The four low-tier symbols have stone faces looking to the left. They come in green, yellow, orange and gray, and they pay from 0.8x to 0.5x for six of a kind combinations.

Keep in mind that because of the Megaways format, you’ll often be getting several times these larger wins depending on how many matching symbols fall on a single row, and that shows that the wins you have here will be larger than what you might otherwise expect.

There’s no doubt that there’s a lot going on with the Gonzo’s Quest Megaways slot in terms of the look and the sizable number of features. What’s really cool is that even though it’s a sequel, there were no corners cut when it comes to making this a tremendous game.

Between the visual appeal and the extremely high-action gameplay (without driving up the volatility very much), this title definitely has a lot of appeal to a variety of different types of players.