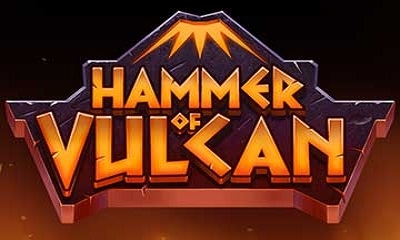 Quickspin’s Hammer of Vulcan online slot brings a ton of action with a fun theme. You’ll have free spins, wild symbols and scatter pays to help you get paid. On top of that, the title looks amazing and keeps things exciting with 4,096 ways to win.

Casinos with Hammer of Vulcan

An Introduction to Hammer of Vulcan

In any slot that players get into, there are two sides of things to balance. On the one hand, you have the gameplay, features and payout schedule. On the other hand, you have how the game looks, sounds and feels as a whole.

The Hammer of Vulcan video slot handles both sides of the equation extremely well. Quickspin definitely did a solid job with this title in this regard.

From an aesthetic standpoint, you’ll be hard-pressed to find something that looks better. This game is up there with the best to be found in the industry as a whole. On top of that, the theme isn’t something that’s been used too much. That means that you aren’t going to feel like you’ve played this game before just from how it looks. Anyone who has played a lot of slots knows how that can be an issue.

On the gameplay front, the action is serious. Several layers of features are available, and they pack some serious value. The hit-rate is pretty strong with a large, all-ways format, and that keeps the volatility down. However, there are definitely some sizable payouts waiting to be had.

Quickspin has a general philosophy when it comes to bet sizing, game format and so on. The basic idea behind that philosophy is to keep things straightforward for players. In this title, you’ll see that lack of complication. However, you’ll also see that it doesn’t impede on the action in any way. Here’s what to expect:

We mentioned above that the hit-rate is pretty solid because of the format. The payouts are balanced as well, and this includes the serious value from the features. As a result, this slot as a whole has a medium-low volatility. As a result, you’ll have several small and medium wins come at a quick pace, on average, when you play.

For most players, the feature set will be the main focus of the Hammer of Vulcan video slot. That’s what most players will be shooting for most of the time. However, the regular pay table offers some pretty good value as well. As a result, you shouldn’t overlook it by mistake.

Two wild symbols are available in this game. The regular wild is the first. It shows up as a flaming “W” on a diamond grid. Here are the payouts for these wilds in winning combinations with themselves:

Like all payouts that we will discuss, these are multiples of your total bet size. If you can make better wins with other symbols, that’s what you will be given as well. The best win possible is always given for each individual line of symbols.

The “Hammer Wild” is the second wild. It’s the symbol with the man holding the hammer looking up to the top-left corner of the screen. When this Hammer Wild appears, you actually get a feature of sorts. This is a downward expanding wild, and it converts all symbols under it to wilds. This includes itself, so you can get up to four wilds at a time with it. These wilds pay normally according to the above list of prizes.

You may see the bonus feature called the “Light the Forge! Bonus” inside of the Hammer of Vulcan online slot. We want to point that out so that there is no confusion about the bonus round.

During this free spins mode, you get a few goodies. To start off, every Hammer Wild that lands increases your multiplier by a factor of one. No limit is imposed for the level of multipliers involved. That means your payouts can get pretty serious toward the end of the feature.

Getting at least one volcano scatter will add free spins to your total. One, two, three or four scatters add one, two, four or six free spins, respectively.

Another feature is included to give you a guaranteed win. It also helps to get the most from the multipliers portion of this bonus. This is called the Strike Again! feature, and it guarantees a win on your last spin. This feature will therefore always end on a payout, bringing the multiplier into play.

How to Win at Hammer of Vulcan

With the Hammer of Vulcan video slot, the hit-rate is pretty serious. The volatility is also in the medium-low range. That means that the volatility isn’t very severe in most sessions. As a result, you can adjust by slightly increasing your bet size.

Payout Structure for Hammer of Vulcan

A lot of symbols are found on the game board. The gold golem pays 12x for six, which is the same as the wilds. You can also pick up 7x for six of the chalice or 6x for six of the swords. The helmets, shields and tons pay 6x, 5x or 4.5x for six of a kind, respectively.

The card rank symbols pay in three tiers. You’ll get 3x for six of the A. The K and Q both pay 2.5x for six. Finally, the 2x payout for six of the J or 10 symbols is also available.

A variety of extra features are used in the Hammer of Vulcan online slot, and that is a fact players can’t say for much of the slots industry overall. The gameplay in this video slot gives a serious degree of fun. Also, the presentation and feel of this title brings a lively look. It’s definitely in competition with several of the best that the online slots world overall has available.

In contrast with other slots that use related overall concepts, this video slot stands out in a number of ways as opposed to only being like everything else. In addition to that, as a portion of this software developer’s portfolio overall, this is a title that holds a key position because it has appeal to a lot of people.

Which online casinos have Hammer of Vulcan?