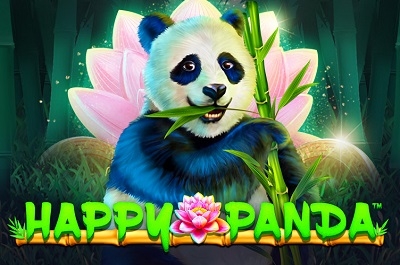 Net Entertainment’s Happy Panda video slot brings players deep into the bamboo forest where you can run up some serious wins. There are re-spins, free spins, expanding wilds and other features in this game that come together to create a whole lot of excitement along with a fun and visually pleasing theme.

An Introduction to Happy Panda

In the online slot world, sometimes we get a bit too hung up on the type of theme being used to the point that we lose sight of what actually makes a game great, and that’s exciting gameplay.

The Happy Panda online slot uses a theme that’s fairly straightforward, but it’s the gameplay that really shines with tons of great features.

When you sit down to play this title, you’ll see bamboo in the background and pandas on the reels. It all comes together in a very smart and visually appealing way.

The gameplay offers a set of features that give you consistent action. You’ll have some small lulls here and there, but everything is set up in a way that makes sure that the envelope is being pressed pretty often during your sessions. That’s the way that gameplay generally should be in video slots, and NetEnt brought that out really well in this particular game.

A great game starts with a great format that’s easy to get into, and that’s what you’ll find here. You’ll see what to expect in what follows:

The volatility of this game is firmly in the medium range. It’s not very skewed in one way or another. On one hand, you have the value that the features hold that drives the volatility up. On the other hand, you have the reasonable hit-rate and number of small and medium wins that are given from the regular pay table that keep it from getting so high that it would be out of hand.

That’s a good overall balance and will suit a high percentage of players.

A lot of the play in this game centers around wild symbols, but there are other features available as well. That’s not to mention the fact that the regular pay table has some pretty good wins available too.

As the name suggests, the panda is the wild symbol in this slot. It’s sitting there eating bamboo and kind of chilling out, and it will give you the following wins:

These are the same as the top-paying regular symbols in the game, but because the wilds have so many other ways to appear, which you’ll see below, they add more value than you might otherwise expect.

When you activate the Falling Wilds Re-spins feature at random, your payouts are given normally. After that, all wilds on the reels will move one position downward, wins are calculated again, and the process continues until no more wilds are on the reels.

If new wilds appear as a result of those reels moving down that already hold wilds, then you’ll pick up more chances to win as the feature continues until those wilds disappear as well.

The Gift of Double Wilds feature can trigger during this game mode as well. This triggers when two wilds show up beside of each other, and it causes both reels to turn completely wild for three spots. The re-spin feature continues from there along the same lines.

The pink and purple lotus symbol is the free spins scatter in the Happy Panda online slot. You can get different numbers of free spins based on how many scatters you use to activate the feature.

You can pick up these winning combinations no matter where the scatters show up on the game board, and that makes it much easier than if you needed them to appear on certain reels or on specific lines.

Three or more of the golden panda paw coin symbols will activate the Giant Panda Jackpot. All of the bonus symbols are randomly placed on the 3×5 grid, and the rest of the spots spin to give more opportunities to get more scatters.

For each bonus symbol, you’ll randomly be given a prize worth 10x to 200x once the feature is over. However, filling up one, two or three rows will give you the minor, major or mega jackpot.

This is a cool way of handling a bonus feature that gives chances for a jackpot without it being too one-sided.

How to Win at Happy Panda

Something to understand about this game is that the volatility is in the upper end of the medium range. Because of this, you’ll probably have to deal with some moderate swings. To combat this, you can play with longer sessions (or more spins per session by playing at a faster speed) while also using a bet size that’s a bit smaller than what you would normally use.

While you’ll get in roughly the same amount in total wagers with this approach, they will be spread across more bets, which means smaller swings.

There are four high-level symbols in the Happy Panda video slot outside of the wild. First is the bamboo, the food of choice for the pandas. They pay 1,600x for five of a kind. The sitting bird pays 1,200x for five as well.

The low-tier symbols are four card rank symbols with bamboo thatching on them. The red A gives you 70x for five, and five of a kind combinations for the green K will be worth 60x. The bottom wins are 50x and 40x for five of the purple Q or yellow J, respectively.

We like the balance of features that the Happy Panda online slot brings to the table. It’s an interesting mix with wild features that give you better pays during the regular game, free spins and a jackpot bonus round. This corresponds to wins at the low, medium and high end of the pay scale.

While the volatility isn’t particularly low, it’s not really out of hand where it’s at. If you like, it’s really easy to drop your bet size down just slightly thanks to the multiple options for controlling the size of your wager.

Overall, the theme is really relaxing, and the soundtrack matches the style of play. It will appeal to a wide range of players between the features, gameplay style and relaxing theme, and that’s the kind of thing that brings a lot of players together. The only real fault of this title is that it does everything pretty well to the point that no one part of the game really stands out.