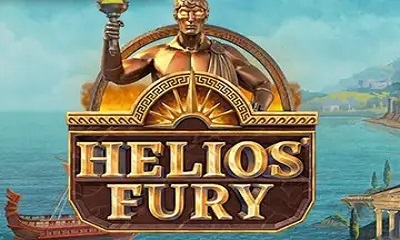 The Helios Fury online slot from Relax Gaming is based on a Greek mythology theme in general and the god of the sun Helios in particular. You can see him beside of the reels holding his giant torch, and he helps you to get wins in this game with wild re-spins and other goodies.

An Introduction to Helios Fury

No shortage of online slots featuring Greek mythology themes is probably ever going to happen. It just tends to be the type of theme that players love to tune into, so developers keep making them. However, Relax Gaming likes for their titles to stand out, and that’s what happened with the Helios Fury video slot.

Even though this game uses Greek mythology as a basis, it’s no copy of what’s already available.

As a result, you end up with a fairly unique type of experience. This starts with the look and feel of the title. Along these lines, the symbols are crafted in a particular style of animation that looks incredible. However, it’s not really like what we’ve seen from other titles in the same sub-genre. On top of that, the rest of the presentation is tremendous with a great background scene. Additionally, a huge statue of Helios stands by the reels the entire time.

The gameplay is also a part of this differentiation from the rest of the sub-genre. Even the regular format is a bit atypical. However, it’s not so far outside of the box that things are difficult to learn. It’s really easy to hop in and get started with this title. With that said, the feature set is pretty strong as well and incorporates aspects of the theme.

We strongly suggest that players get an understanding of this title’s format before starting. It’s not that it’s difficult to understand as it is simply atypical. It’s sort of a blend between the “all ways” and payline-based formats. Here’s what you can expect:

We like how this title is set up to offer players a solid, balanced experience. A big part of that comes from how the pay table has a balance between small, medium and larger pays. However, the feature set keeps things pretty reasonable as well. Additionally, the format allows for a high hit-rate relative to the size of the wagers. With all of this combined, we put this game’s overall volatility in the medium-low range.

The feature set is a major part of the gameplay of the Helios Fury online slot. However, the “connected ways” format helps to keep things exciting as well. If you’ve never played a game with that type of win determination, then you don’t sweat it. You’ll get used to it in just a few spins.

We also want to point out how the payouts are described. It’s always based around the total amount of your wager. For example, if you’re betting €5 per spin and win a 50x payout, then your prize is €250. This keeps the betting and prizes pretty simple with the atypical layout and approach to wins.

On all five of the reels, you can spot a ship symbol. It’s easy to see because it has a huge sail with an enormous red “W” on it. This is the wild symbol, and it offers the following payouts on its own:

These wilds are really important because they’re responsible for a feature, but we’ll dive into that below. Additionally, they help to get a lot of wins you wouldn’t have received without their help.

Something players need to know is that wild wins might be skipped over if a better win is available using them on the given winning way. In any event, you’ll always be given the best possible payout on each winning way. Additionally, this helps to avoid any confusion players may have about how the wins are calculated when multiple options are available.

If you get a win that includes at least one wild symbol, then you’ll trigger a wild re-spin. The way this works is that all of the wilds used in the wins move one spot to the right. All other positions spin again to give you a free shot at extra payouts. From there, the process continues as long as there are new wins with wilds included.

However, another way this feature can win is if a winning combination is paid that includes a wild on the fifth reel. This is a value-packed feature that hits relatively often. We really like how much value it offers since it can trigger multiple times in a row.

If you get a winning combination that uses a wild symbol on the fifth reel, then you’ll trigger this feature. The Fury Free Spins starts you off with six free turns, but there’s more to it than the regular game mode.

You’ll begin with a wild in the middle of the first reel. Additionally, the entire reel area is increased in size by two vertical positions. If you get wilds in the free spins, they add an extra free turn. On top of that, they are held in place for the remainder of the feature. This gives a whole lot of value and a lot of extra ways to win. However, the re-spin feature is still in play, which makes things even more exciting.

How to Win at Helios Fury

Despite the value that the features offer, the volatility of this game is still in the medium-low range. That puts players in a position when playing the Helios Fury video slot where they have the option for a betting adjustment. The idea is that a small increase to your bet size (from your average) can have some positive effects.

First off is the obvious: You’ll get better payouts. However, that in and of itself is not a good enough reason to increase your bet size. What makes it worth it for a lot of players is that the swings will still be really reasonable. That makes a bet sizing increase in the range of 25 to 33 percent a viable option.

However, keep in mind that going beyond this small of an increase defeats the point. That’s because the swings will catch up and be too large to make it worth it.

Aside from the wild ship symbol, the one that pays the most in this game is the Spartan helmet. It shows up in red, and it offers 20x for five of a kind. You’ll also notice that it’s the only non-wild to pay for just two of a kind. From there, the horn awards 8x for five as well. For the sword and shield symbols, they pay out at 6x and 5x, respectively, for five on a winning way.

Five other symbols are used for the bottom tier. These are the four card suit symbols along with a star symbol. The red star, blue spade, golden heart, green club and silver diamond symbols all pay 1x for five of a kind combinations.

The excitement is absolutely boosted by the great level to which the level of graphics completely fits the slot’s theme. On top of that, as a part of this developer’s offering of online slots as a whole, this is a video slot that holds an important job since it appeals to a whole lot of people.

In contrast with other games that use related driving ideas, this game stands out in a number of ways instead of just being one in the same, and the feature-focused gameplay style of this slot is targeted around offering slot fans a ton of excitement. Also, the set of features offers a number of various additional ways to take down a win on top of the usual pay table.

Which online casinos have Helios Fury?

What is the Return to Player (RTP) for Helios Fury?