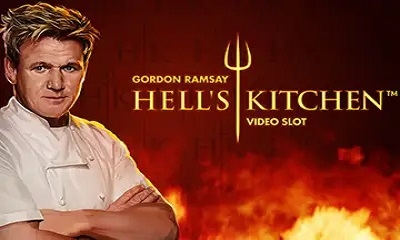 The Hell’s Kitchen online slot from Net Entertainment is based around the hit show with Gordon Ramsay. With 20 paylines of action and lots of wilds on the reels, a lot of wins are waiting to happen. This includes the team-based bonus game that’s roughly based on the style of the television show.

An Introduction to Hell’s Kitchen

If you’ve ever watched the television show that the Hell’s Kitchen video slot is based on, then you know that things get hot when Gordon Ramsay loses his cool. You won’t have to worry about that in this game. However, what you will have to worry about are a lot of ways to win.

The action is fast and furious in this title. In that way, the style is very much like the competition-heavy show itself.

The thing that most players will note right away is the visual style. It looks like a variety of popular dishes are on the reels as well as grill symbols. On the left and right are the red and blue symbols for the two teams on the show. The show itself is a battle between those two teams, and you get to win in the process.

On the gameplay front, there’s a good balance between the regular pay table and the features. With 20 lines, you’ll get plenty of hits. The features help with the hit-rate as well. However, the main bonus feature will take you into a different game mode where the teams face off, and you get plenty of extra chances to win some pretty significant payouts.

With the Hell’s Kitchen online slot, you’ll have a pretty standard format in play. It’s not difficult to get used to playing at all. Here’s what to expect:

With a game that’s as balanced as this one, it makes sense that it has a low volatility. The hit-rate is a little higher than most low volatility titles, however. That works out in a way that gives you plenty of small and medium prizes. However, the largest wins are definitely available due to the bonus features.

In this game, you’ll have a few different features. These features have more depth to them than a lot of what’s out there currently. Because of this, it’s pretty important to know how they work before you jump in. Along these lines, we’re going to break down how these features work in the following.

The main feature that a lot of the game is based around is the wilds. The big “HK” logo is the wild symbol in the Hell’s Kitchen video slot. It offers some pretty solid payouts on its own:

These payouts, which are among the best regular wins in the game, are based on multiples of your bet. For example, five wilds will pay 10 times your total bet size. This would be like a 200x line bet wager (due to there being 20 paylines).

These wilds give you lots of value from substitutions as well. They will always give you the best individual payout available on each of the 20 paylines. However, it’s important to point out that they do not substitute for the scatter symbols.

One of the key features centers around the wilds. At random intervals, you’ll trigger this feature. You don’t have to line up any particular symbols. You also don’t have to do anything in particular to get it to show up with your betting. It simply appears at random on any given spin.

When this feature triggers, you’ll get five to seven random spots chosen on the game board. Those spots will be filled with extra wilds. This will give you extra chances to get payouts as well as wild combinations that pay particularly well.

If one of these wilds goes over the top of a scatter, then the scatter still counts. This keeps you from having situations where you would have triggered a feature but miss out on it because of the Ramsay’s Wilds Feature.

What we really like about this feature is that it offers extra chances to win. They’re chances you wouldn’t have picked up normally. However, because you have more chances to win all on the same spin, things are different here. You’ll have some serious opportunities for several wins all on the same turn. As a result, this feature gives you a chance to get a pretty serious total payout.

The scatter symbols make an appearance on all reels but the middle reel. If you get a scatter to appear on three of those reels, you’ll be given 10 free spins. However, a total of 15 free spins is yours if you get all four scatters on the game board at once.

When this feature starts, you’ll be given a choice between the red and blue teams. Each team gets their own reels where the free spins play out. The total wins for each set of reels is counted at the top of each game board. You’ll see why that’s important below.

You have three extra features that will be added to give free spins more value. You can pick up a 2x multiplier, a 3x multiplier or extra wilds. With extra wilds, three to eight wilds are added at random to each individual spin.

What’s really cool is that you can get multiple extra features on the same spin. If you get both the 2x and 3x multipliers at the same time, it turns into a 5x multiplier instead.

Once the team challenge is over, the team with the biggest score wins. If the team you chose wins in this way, then you advance to the final stage. That comes in the form of Gordon’s Bonus Game.

Gordon’s Bonus Game is the last feature in the Hell’s Kitchen online slot. You’ll see a grid of 15 different menus for the restaurant on the game board instead of the reels. You get to pick from the list until you get three of the X symbols. That will end the round.

Until then, you’ll pick up a few different options from the menus you choose:

All of your wins are combined and then are applied to the total multiplier once you hit your three X symbols. The end result is a pretty serious instant payout.

How to Win at Hell’s Kitchen

The volatility is definitely in the low range for this game. Along these lines, the typical adjustment is to increase your bet size somewhat. Something along the lines of an increase of 50 to 75 percent is plenty here. Going anymore than that will defeat the purpose of how this adjustment works.

The idea behind this adjustment is twofold. First, you simply get bigger payouts than you would otherwise. Second, the swings stay pretty reasonable in spite of the increased bet size because the volatility is so low.

Four different card rank symbols show up as if they are a part of a grill. The A and K both have the same payouts with 1.5x being yours for five on a line. Five of a kind combinations of the Q symbol gets you 1x. Finally, you can earn 0.75x for five of the J.

What you will absolutely enjoy about the Hell’s Kitchen video slot is the padding that the plethora of features add to your account balance, and the presentation and aesthetic appeal of this slot brings a gorgeous feel that is in competition with much that the casino industry overall has available. If you have liked other games that focus on this type of overall theme, then this is one video slot you won’t want to avoid.

Since this game brings a tremendous level of quality while still standing out as an individual game, this video slot fits tremendously in this software company’s selection of titles as a whole. As if that wasn’t enough, the gameplay style is extremely action-centric with a serious number of opportunities to hit big payouts.