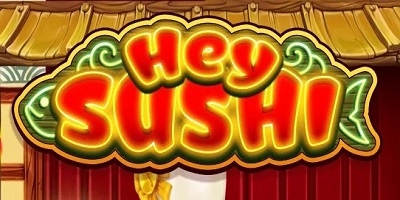 Habanero Systems’ Hey Sushi online slot brings a completely different set of features than we’ve ever seen from a cascade-based video slot. This game offers multipliers during both the regular game mode and free spins mode on top of bonus payouts just for getting winning combinations of particular symbols.

An Introduction to Hey Sushi

In any slot that uses a popular format or set of features, you’ll always get comparisons to other slots in that specific sub-genre. However, the Hey Sushi video slot by Habanero Systems has broken out of whatever sub-genre that it would be placed in by default, and it has done it in a big way.

A big part of the reason for this is that the accompanying feature set and the way the main feature is handled is a bit different than the rest.

This puts players in a position of getting a completely different style of gameplay enough though it will feel similar to titles they have played before at the same time.

With that said, this game also has a very strong aesthetic quality to it with high-end graphics that would be competitive with virtually any other title in the industry, let alone the feature-based sub-genre. In any case, this is a title that both looks and plays at a particularly high quality.

Habanero Systems is well-known for giving players a ton of detailed betting options with plenty of available increments to make it easy to get your bet size exactly how you want it. That and more are included in this game’s layout:

The action is very serious with the Hey Sushi video slot, but the way some of the features work are different than how they work in many other games, so we want to clarify all of this before you jump in and get started so that you can avoid all confusion about the game mechanics.

The crab is the wild symbol in this slot, and it’s responsible for some pretty sizable wins. The payouts for just the crab are as follows:

As is usually the case, these wilds do not substitute for the scatter symbols in this slot.

It’s also worth noting that you’ll get the best possible payout per individual payline in this game. That means if a three or four of a kind wild combination could be used for a longer winning combo of a different symbol that pays better, then you’ll always get the highest-paying possibility.

For every winning combination that you get in the Hey Sushi online slot, you will be paid out first before the winning symbols disappear to allow new symbols to fall down into the resulting empty space. This is a cascade, and it allows new chances for winning combinations.

This process continues over and over, at no cost to you, until there are no new winning combinations available.

On the casecades, however, the multipliers for your wins increases according to the meter shown on the right-hand side of the top of the reels. On your first cascade, you’ll have a 2x multiplier on any wins. It’s 3x on your third and 5x on the fourth and subsequent cascades.

The tray of sushi is the scatter, and while it helps you to get a bonus feature, it also offers payouts. It’s worth noting that it does not appear in the free spins feature, but here are the wins you can expect in the regular game mode:

You will note that five scatters are the best individual winning combination in the game, but it’s worth noting that these payouts are not subject to the multiplier feature, so they can’t be boosted along those lines.

If it happens on the base spin, the multipliers are the same for the free spins as usual, and this scales up to some pretty big levels. For example, if you picked it up on the fourth cascade or beyond that, the multipliers become 5x/7x/10x/15x.

You’ll also get bonus payouts during the free spins for every individual winning combination you get. These are based on the symbol itself and not how many of the symbol you get in a win.

How to Win at Hey Sushi

With its medium volatility, and with the lack of options that change the RTP percentage of the slot, there’s not actually much to do in terms of making sure that you get the best chances to win. All you really need to worry about is making sure that you use a bet size that’s in line with what you would normally be comfortable with instead of trying to adjust to make it larger or smaller for some reason (like you would with games with a smaller or higher volatility, respectively).

There are a lot of symbols in this game. You’ll find that there are actually seven different wins just for sushi symbols that range from 750x for five to 100x for five of a kind on a given payline. The balance in this portion of the pay table is pretty strong, and this helps to keep the volatility pretty much in check overall.

From there, card rank symbols are represented with fish cut in in different ways on beds of rice. These wins range from 75x to 25x for five of a kind combinations as well.

In general, games with a cascade feature like the one found in the Hey Sushi online slot tend to play in similar ways, but Habanero Systems made this title break out of the pack. A lot of this comes down to the more balanced pay table, higher hit-rate and innovative approach to the scatters and bonus features.

Overall, it’s the kind of title that we think appeals to a wide audience, and it’s something that we’d honestly like to see more of in that regard.