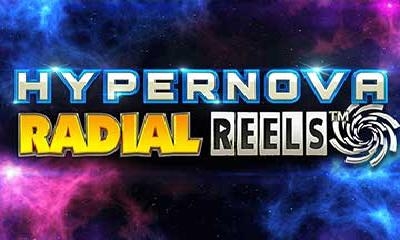 The Hypernova Radial Reels online slot by ReelPlay takes players on an intergalactic journey in space with a star- and galaxy-based theme and an atypical format that really fits the concept. Multipliers, exploding symbols and free spins are the order of the day in this exciting slot with an atypical visual style.

An Introduction to Hypernova Radial Reels

There’s a certain format for slots that has been used more or less since the very first slot-like games (though they were actually based around poker) were invented. These days, we see similarities between the hottest new titles and games that have been around for well over a century, but ReelPlay has blown that idea out of the water with their Hypernova Radial Reels video slot.

The basic idea here is that the format actually matches the theme of the game instead of being something that’s just thrown together based on tradition.

There’s a resulting gameplay style that’s a bit different than virtually all other slots, but it does have some types of similarities to a degree that allows new players to hop in without feeling like they have to completely relearn the genre.

The pay schedule is also pretty generous with sizable wins on the regular pay table and a set of features that bring a lot of value as well.

This game’s format is obviously at the center of the attention that it gets, and we’ll break down everything that you need to know about it here because it is a bit atypical.

With everything based around the number 12 for this game’s betting setup, it is a little atypical in the sense that it doesn’t use particularly even numbers. However, it’s handled in a way that this doesn’t get in the way of the gameplay at all, so it’s definitely something that you don’t need to pay that much attention to.

One thing you may want to pay attention to, however, is this game’s volatility. That’s because it’s a bit misleading, partially due to the atypical format. You’ll have a medium overall volatility, but the hit-rate is higher than you’d expect, and that’s one reason why it can be tricky to evaluate by just glancing over the pay schedule.

The Hypernova Radial Reels online slot brings more to the table than just a different style of game. There are plenty of features in this title, and we’ll walk you through them here so that you know what to expect when the wins start coming in.

The wild in this game is a purple glowing orb sort of like the one in the center of the game board, but it has blue rings around it and the word “WILD” hopping out at you across it. The wild can appear in any position, and it gives the following payouts:

These wilds are pretty useful because they help you to get wins that you would have missed out on otherwise, and that’s more important with the way the other features work in this game because it has an effect of compounding multiple sources of value.

The explosion feature in this game is an interesting take on “Rolling Reels” or “Avalanche” style re-spin features that is geared toward the atypical, circle-based format.

The overall idea is that winning combinations are removed from the game board, and new symbols fall into place. However, the way this works is a bit different than other games. All symbols will fall downward rotating in their respective circles. Then, new symbols will come into place at random to fill in the missing “holes” where the previous symbols were removed.

This gives another chance to win, which can then trigger another explosion feature. This process continues over and over until there are no new wins available on the game board.

There’s a purple glowing supernova symbol that can appear anywhere on the game board, and it is the scatter. You’ll pick up the following payouts no matter where these scatters show up on the grid:

These are some pretty good payouts considering they don’t have to show up on any particular line and considering that there are so many spots on the game grid as a whole.

If you get three or more scatters anywhere on the same line, no matter the positioning, then you’ll trigger a free spins bonus round in the Hypernova Radial Reels video slot.

You’ll always be given four free spins to start with, but every time at least one scatter shows up on the game board, the total resets back to four, so you can really carry on for quite a while just by picking up a scatter here or there. This also effectively means that you only need one scatter to re-trigger the feature and/or add more free spins to your total, whichever way you want to think about it.

The main thing that sets the free spins apart from the regular game mode is that there’s a wild multiplier. It starts off at just 1, but each scatter increases it, and every win that includes at least one wild increases it.

Note that scatters always explode in this game mode no matter how many show up on the board, which also helps you to get more explosion features since you don’t have to actually hit a paying win to activate it in this bonus round.

How to Win at Hypernova Radial Reels

A key part of this game is about keeping in mind that the hit-rate is pretty solid while the volatility is still up in the medium range. If you go off of the hit-rate alone, you can be lulled into thinking that increasing your bet size is a good idea. However, the swings are actually more severe than they would otherwise seem if you were only paying attention to this one measurement.

Instead, we recommend simply picking a bet size from near the middle of the range that you’re comfortable with. This will be more than sufficient for this title.

Aside from the payouts for the scatters, there are a number of neon gem symbols that look absolutely amazing that offer payouts in this game. You’ll notice that the overall pay structure is fairly flat and balanced as well.

The purple diamond kicks things off with a 400x win for six of a kind. Six of the red heart-shaped gem gets players 300x, and six of the golden circle gem is worth 250x. A win of 200x is also available for six of a kind combinations of the orange hexagon.

Things start to slow down in terms of how fast the wins are dropping at the 150x level, which is a win given by six of the green hexagon or teal pentagon. The violet diamond and purple square both have wins of 120x for six, and getting six of either of the blue or gray triangle symbols will pay out 100x.

Note that the six of a kind combinations actually pay twice when you win them because they are wins in two different directions.

The gameplay style of the Hypernova Radial Reels video slot is what will get the most attention from players. While it’s definitely atypical and action-packed, it’s not so far “outside of the box” that it will be difficult to pick up and play if you’re used to other types of games.

We really like how the win multipliers are used in the free spins mode to add a lot of value and how you can really get free turns indefinitely by resetting the count with just a single scatter over and over.