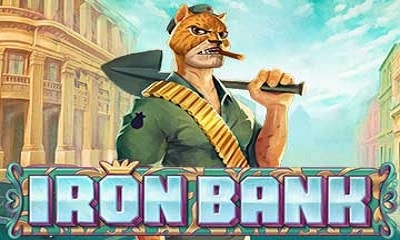 Relax Gaming’s Iron Bank video slots is all about packing as much action as possible onto the reels. It has a fun bank heist theme with animals, and the feature set is strong. You’ll have over 4,000 ways to win on each turn on top of random features that hit regularly.

An Introduction to Iron Bank

Does robbing a bank and running up your account balance in the process sounds fun? If so, then the Iron Bank online slot is for you. This game combines a fun animal theme with a bank robbery situation to create something a bit different than what you’ve probably seen anywhere before, and that’s the kind of thing that stands out in this industry on the theme and concept side of things.

Relax Gaming is known for creating a different situation than most providers when it comes to their slot themes.

Visually, they did something pretty fun with this concept. Each of the characters on the reels serve an important purpose. That’s both in terms of the story being told and in terms of the gameplay itself. From there, the other symbols fit in perfectly, and the graphical style is strong as well.

Additionally, the style of play is pretty action-oriented, which is exactly what’s called for here. You can’t have a bank robbery-based slot without a ton of ways to get paid. That’s why you’ll get both random and symbol-based features on top of a fast-paced overall format for the game.

With a theme like this, it’s definitely called for to have a ton of action. That’s exactly what Push Gaming thought as well, so they used a format that brings that out. Here’s what to expect:

The volatility is pretty low for this game. A big part of that is that the hit-rate is so high, so a ton of small and medium wins smooth things out. Additionally, the feature set hits randomly and hits fairly often. That means that you’ll most likely get several features to hit during any given session.

As we mentioned up above, the feature set of the Iron Bank online slot is pretty serious. A lot of features come together, and several of them hit pretty often. We’ll break down everything that’s available in the following to make it easy to know what’s going on.

On the second through fifth (middle four) reels, wild symbols can appear. Since they do not show up on all six reels, they don’t get their own payouts. However, they don’t really need to here with the large amount of value they offer.

Two different types of wilds can show up, but they’re both the same humanoid cheetah-type figure. They each appear to be in the jungle with a shovel and a bag as some type of soldier. In any event, one of them is pretty normal and takes up a single spot. However, the other is stacked four spots high and definitely makes it easier to hit multiple wins at one time.

If you get one of the stacked wilds fully covering a reel, then you’re in for an exciting treat. This triggers a multiplier that runs from 2x to 10x. The multiplier will apply to any win that includes any wild from that stack. What’s more is that you can get more than one of these at once. When that happens, the multipliers multiply by each other to give you even larger payouts.

The silver bonus vault door is scattered in the Iron Bank video slot. It offers the following payouts:

If you get at least three of these on the reels, however, you’ll get to choose between three free spins modes. Here are the modes available:

The features here are pretty varied, and that helps to add to the action.

Two additional random features are available on any given spin. One adds 1-3 random bonus symbols to the game board, which boosts your chances for free spins. Additionally, it gives you better chances for scatter payouts.

How to Win at Iron Bank

With such a low volatility and a high hit-rate, the Iron Bank online slot has little to no major swings. Players can take advantage of this by increasing the size of their bet by about 50 to 75 percent. This is the right adjustment for low-volatility titles, and the swings stay pretty low. However, the size of your payouts increases proportionately, making it easier to go on sizable winning streaks.

The regular symbols have a pretty flat pay table with some solid wins in this game. You’ll need at least three for any of the following for a payout.

It starts with the bull bank manager, and he gives you 50x for six of a kind. Six of the gem-like vase gets you 10x, and six of the banana is worth 4x. The bottle of liquor is worth 3x for six, and you can pick up 2x for six of a kind of the box of cigars.

All of the card rank symbols are designed to look like the fonts commonly seen on various currencies. The red A, yellow K, green Q, teal J and blue 10 symbols all pay from 0.8x to 0.4x. They all each pay for three of a kind or more as well.

If you’ve enjoyed playing other titles that have used this kind of concept, then the Iron Bank video slot is one game you definitely won’t want to avoid. Along with that, since this game offers a serious level of quality while still having a tremendous amount of value individually, this online slot fits really well in this company’s portfolio as a whole.

Along with that, if action is exactly what you’re needing in your play, then you’ll totally fall in love with the gameplay experience that this title brings to your play. The aesthetic appeal of this title is exceptional and raises up the whole play style, and a serious number of special features can be found in this video slot, which is a fact we can’t say for much of the competition.