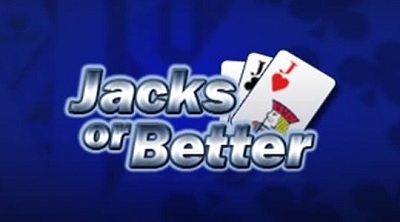 Jacks or Better video poker is known for being the most popular title in the genre and the foundation of many other games. It wasn’t the original video poker game, but the fundamentals of this title are what you find in virtually every other video poker machine out there.

An Introduction to Jacks or Better Video Poker

Poker is an interesting game in that it’s the most popular multi-player card game probably ever in the past couple of centuries, and a problem that’s always come up with it in gambling circles is the inability to play without other people who are available and ready to go.

Video poker was originally an answer to this issue, giving players a chance to play against the house instead of having to face off against other players who were playing the game on equal footing as well.

The end result was a game that was originally produced in the same styling as slots and with a similar history that eventually evolved into its own style and genre. If you want to get started with video poker in general, then you have to start with Jacks or Better if you want to really get anywhere.

A Brief History of Jacks or Better

In the very late 1800s and very early 1900s, there were mechanical slot-like games that used poker cards to award prizes based on their final hands. This led to the earliest draw poker machines, which were still mechanic at the time but that eventually led to video poker.

Where Jacks or Better comes into play is actually really interesting. A man named Si Redd, who had previously worked for Bally’s Gaming, was the first person to use this type of game in a video format. In the earliest versions that he created, you needed at least two pair to get a payout, and players didn’t respond to this approach in a very good way, which is probably because getting two pair seems difficult until you look at the numbers.

Most people aren’t familiar with the numbers, so when he switched over to allowing payouts for single pair hands as long as the pair was jacks or better (which is where the name comes from), the popularity of the games shot through the roof.

Si Redd’s video poker company SIRCOMA later rebranded and became a name that some people just might have heard of: International Game Technology, a company that’s still to this day one of the biggest suppliers of slots and video poker games in the entire world.

To understand the rules of this game, you’ll need to understand basic five-card poker hands. We’ll look at those and their respective payouts below, but first, we want to look at the basic gameplay procedure for this title:

The concept is pretty simple, and it’s very obviously based on the standard style of five-card draw poker, which was one of the most popular forms of poker in the world at the time that the game was created despite having fallen by the wayside in more modern times.

In what follows, we’ll give a basic understanding of the standard five-card poker hands that are used on the Jacks or Better pay table along with the standardized payouts.

Note that some games will have different payouts on their pay tables, and we’ll address those differences down below. The payouts we’ll use here are the standard pays that are considered the normal rules for the game, and it’s often called the “9/6” or “full pay” version of the game.

All other hands yield no payout in this game. Note that you will always automatically be given the best payout possible based on the five cards in your final hand, so you don’t have to worry about mistakenly choosing the wrong payout or being paid less because you hold one type of hand when you also hold a higher-paying one.

You’ll sometimes see pay tables that are lower than what you find in the above. If you play perfectly with the pay table above, you can get a payout rate of 99.54 percent, which is a house edge of just 0.46 percent on average.

Likewise, a 9/5 pay table would mean that the full house hands pay 9x but that the flushes pay just 5x. Here is a quick overview of the best possible payout rates available for other common pay tables:

As you can see, there’s really no reason to play this game unless it uses the rule set with the 9/6 pay table since that gives you a better win rate overall compared to the other versions of the same game with different prizes.

We have a number of guides on strategy for this game, and here are some of the most popular:

With that said, the basic idea of strategy in this game centers around making the best option possible for which cards you choose to discard. There are 32 different options for combinations of discards (including keeping all five hands, which is always an option), and you have to try to figure out which of those 32 ways is the best choice.

Some versions of Jacks or Better video poker will have a progressive available. These games usually have a lower regular pay table in exchange for a royal flush or some other hand that triggers the progressive. The rules for these games can vary a bit, but if the jackpot is large enough, you can have an edge against the house when you play them.

There’s no denying the importance of Jacks or Better in the video poker genre and in the overall casino industry. It’s still one of the most popular non-slot games out of everything else that’s available, and players from all over the world enjoy playing this game online and in land-based establishments.

Which online casinos have Jacks or Better Video Poker?