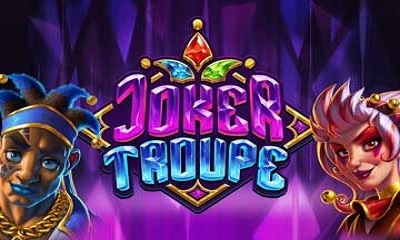 The Joker Troupe video slot from Push Gaming gives players three exciting features inside of a format that’s slightly smaller than usual to compress the action and make it easier to hit the biggest wins that the game has to offer.

An Introduction to Joker Troupe

We like seeing software companies do something a bit different when it comes to formats for video slots. Push Gaming has done just that with their Joker Troupe online slot, and they’ve packed it with exciting features so that you’re getting the most out of the atypically small amount of space it has available on the game board.

Don’t let the layout of the game fool you: It has just as much, if not more, action than most of the video slots out there today.

Visually, this game has a really interesting theme with three different types of jokers that are loosely tied to three of the classical elements. The graphical style is really cool with a completely different approach on the “fruit machine” concept than we’ve ever seen before, and it’s a welcomed departure from the countless “throwback” titles that put the same three to five fruit symbols on the reels for the lower tier payouts.

The gameplay is particularly solid as well. Some good payouts can be had on the reels, but the number of features and how they work in such atypical ways is really where the attention is going to be on this end of things for this particular title.

The format being a bit different is the first thing that a lot of players are going to notice, so we’re going to break it down so that there are no surprises and so that you know exactly what you’re getting. Here’s what to expect:

The volatility of this title is an interesting topic because it’s smaller than usual. Having four of a kind wins be the biggest pays definitely drops the volatility a substantial amount, but it’s not really rock bottom because of the amount of value that the features hold. Overall, it’s in the medium-low range, but the hit-rate is deceptively high.

The gameplay of the Joker Troupe online slot is actually where we think most of the attention should be once players get past it having a smaller format than usual. It’s packed with features that tie in perfectly to the overall concept of the game, and that’s a level of cohesion that we really love to see because it means everything makes sense instead of being disjointed.

The element tied to the red joker is fire, and the reels will definitely be on fire if you get three of these red jokers on the reels at the same time. When you do so, you’ll get 20 seconds worth of the Red Joker Free Spins bonus feature. This is obviously an atypical way of handling free spins, but that’s how they decided to mix things up here.

Something really cool about how this works is that there’s a meter off the side that counts down your remaining time. Each red joker that appears on the reels during the feature essentially gives you more free spins, which means that you’ll get more than it seems like you’re going to get each time that this feature is activated.

With three or more of the green joker, which is connected to the element of earth, you’ll get a spin on a special bonus wheel. This wheel gives payouts and opportunities to also activate the Red Joker Free Spins.

There are two types of segments on the reels. The segments with a single layer, like a slice of pie or cake, are wins that are worth an amount multiplied by your total bet size. In this sense, you can win up to 10x with this feature on the first spin.

However, there are also segments with multiple pieces, and these apply multipliers to your wins. You can get multipliers of 2x or 5x, which give you chances for wins worth up to 20x or 50x on the second and third spins. If you hit the same segment again as it breaks down to reveal more spaces, you can activate a set of free spins.

Getting that segment for a fourth time gives you the single best payout available in the bonus game, which is worth 100x.

In the Joker Troupe video slot, we think that the Blue Joker feature is the most unique, though the other two aren’t exactly standard for the genre. Three or more activates the card feature, and the way this works is that you start with three re-spins. Each hat symbol and Red Joker symbol will start you back over with three re-spins but will also stick to the reels.

This keeps going over and over while adding wins ranging from 2x to 25x, multiplied by your total bet size, each. Once the feature is over. All of your wins are accumulated.

How to Win at Joker Troupe

The volatility of this game is well within the medium to low range, and that means that you should adjust by going for bet sizes that are at or slightly above the average for what you’re comfortable with inside of the range of bets that you would normally use.

You don’t need to make a massive adjustment for the volatility of this title. An increase of something like 25 to 33 percent of your bet size is plenty if you decide to make that adjustment. The idea behind this slight increase in wager is to get more from your wins while still being shielded from the swings by the volatility being on the lower end of what we typically see.

The main symbol for regular payouts here is the lucky red 8, which is obviously based on the more typical lucky 7, and it gives 100x for four of a kind. You can also score with two of a kind of this symbol, which is the only symbol that does so in the game. A payout of 50x for four of the purple fire dice is also available.

Things drop off pretty hard from there, but it’s not such a big deal since there are only six regular paying symbols in the game anyway. The dragon fruit gets you 3x for four of a kind, and it’s only slightly less at 2.5x for four of the star fruit. Wins of 1x are available for four of the fire or water emblems as well.

Due to the fact that the Joker Troupe online slot offers a high degree of quality while still standing out on its own, this video slot fits really well in this developer’s portfolio overall. We also want to point out that if you’ve liked other slots that center around the throwback type of theme, then this is a video slot you won’t want to miss out on.

Everything centers around fun with this video slot, and that is tremendous news for slot fans who prefer an action-oriented gameplay style, and the presentation of this title is exceptional and enhances the overall gameplay. Also worth noting, a variety of special features are available in in this title, which is something you can’t take for granted for a lot of the slots industry overall.