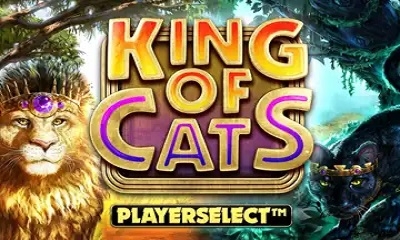 The King of Cats Megaways online slot has a player selection option to choose between two feature sets. These sets are based on the Lion and Puma, and they affect regular gameplay and free spins. This allows a certain degree of customization of your experience in a special way.

Casinos with King of Cats Megaways

An Introduction to King of Cats Megaways

Customization isn’t something that online slots are really known for. You’re basically given the game, select a bet size and have at it. However, Big Time Gaming’s King of Cats Megaways video slot handles things a bit differently.

The main thing that sets this title apart is its player select feature.

As a result, the gameplay can largely take on two styles. We’ll get into the specifics of these two styles down below. However, it’s a really interesting idea that we haven’t really seen much of before. It’s definitely the kind of thing that will appeal to most players.

Visually, this is a good-looking game even if the theme isn’t exactly new or original. Plenty of games have been made around animals with lions being a popular choice. However, in the context of the player select option, it makes a lot more sense here. Moreover, the background and the symbol set have been done in a very aesthetically pleasing way. As a result, it’s a great game to look at and has an immersive quality.

No matter which of the two game modes you choose, the format is the same. Here we’ll break down what you can expect from this Megaways title.

The betting situation is the same no matter which game mode you’re playing. Additionally, the volatility will be in the medium range for both as well. This leads to a play style and hit-rate that most players can be comfortable with. That’s a big part of why this game would have such a wide appeal even if it didn’t have the player selection feature as a part of the draw that makes it special.

Something to keep in mind about the King of Cats Megaways online slot is that the features vary. Most of them change in some substantial way based around the Lion or Puma mode selection. As a result, you need to keep in mind which game mode you’re in at all times. While that can all seem confusing on the surface, we’re going to break it all down for you here.

During the Lion game, you can get extra-sized wild symbols. They come in three different sizes: 2×2, 3×3 and 4×4. This is a pretty huge piece of value because they count as a matching symbol for each spot that they take up. As a result, they’ll count for four, nine or 16 spots each, respectively.

The end result is that you get much easier chances to hit wins. Moreover, those wins will consist of payouts on several different winning ways.

The wild feature during the Puma Game is different. Puma wilds will randomly show up and take over entire reels. Up to three reels can be turned completely wild as a result. On top of that, each one of them will add a multiplier as well.

The multipliers can randomly be worth 2x, 3x or 4x. Once again, this makes getting wins in general easier while also providing for larger wins than you would have picked up on otherwise, which is what we’re obviously after with these two different wild features.

The number of Lion Free Spins you get during the King of Cat Megaways video slot depends on the scatters. Here’s the number of free spins you can get based on scatter numbers for this feature:

The main thing to know about this feature is the escalating multipliers. The 2×2, 3×3 and 4×4 Lion Wilds start off with wild multipliers of 2x, 5x and 8x. After each one that appears, there’s a multiplier applied to the multiplier, so they become 4x, 5x and 16x. They continue proportionately from there. What’s more is that you can add more free spins with three or more scatters.

You’ll have multipliers of 2x, 4x and 6x available on Puma Wilds during this feature. They will increase by a factor of 1x, 2x or 3x, respectively, for each one that shows up. Again, you can add more free spins and re-trigger the bonus with three or more scatters.

A golden cat symbol is also a regular wild in this game. It randomly makes appearances on the second, third, fourth and fifth reels. Since it doesn’t show up on every one of the six reels, it doesn’t have its own payouts.

How to Win at King of Cats Megaways

No real betting adjustments are necessary for the King of Cats Megaways online slot. The reason for this is the medium volatility and moderately high hit-rate. The basic idea here is that a medium volatility means you should just go for a bet size that’s around the average that you’d normally be okay with.

That’s good news for players who just want to always use the same bet size without needing to adjust.

Four gem symbols make up the upper-tier symbols in the King of Cats Megaways video slot. It starts off with the purple, which is worth 25x for six. Note that this symbol also pays for just two of a kind and is the only symbol in the game to do so.

From there, you’ll have wins of 4x made available for six of a kind combinations of the red gem. The blue and green gems are worth 1.5x and 1x for six, respectively.

Card rank symbol wins come in three tiers. First off, you have the purple A and red K that are worth 0.8x for six. Six of a kind of the blue Q and green J symbols earn you 0.6x. Finally, players are awarded 0.4x for lining up six of the yellow 10 or teal 9 symbols.

The excitement is completely boosted by the tremendous level to which the presentation fits this video slot’s concept. Additionally, as a portion of this developer’s portfolio overall, this is a title that fills a key role since it is a great fit to many players.

The driving concept is utilized in a particularly smart way in this game, compared to it merely being a non-critical part of the slot like what we see in virtually all online slots, and a good number of special features are available in in this video slot, and that is something we can’t say for much of the slots world overall. As if that wasn’t enough, if fun is the thing you’re looking for, then you’ll totally love the gameplay that this game gives to the table.

Which online casinos have King of Cats Megaways?