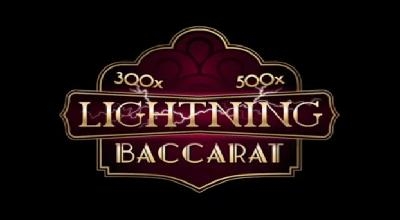 Evolution Gaming’s Lightning Baccarat offers chances for players to win much larger payouts than they typically would in a game from this genre thanks to the special lightning card dynamic. You can pick up multipliers on your wins as a result worth up to more than 300,000 times your original bet size, some of the largest possible wins available in any live dealer game.

An Introduction to Lightning Baccarat

For some players, Baccarat is a bit too slow-paced for what they like, even for table game players. It’s not that the speed of the game is slow since it’s on pace or faster than most other similar titles. Instead, it’s that the best wagers in the game pay 1:1 or less, which leads to a very low volatility and few possibilities for booking major wins in your sessions.

Evolution Gaming’s Lightning Baccarat changes this dynamic by introducing a gameplay mechanic that gives you opportunities to win hundreds or thousands times your bet size.

While we’ll get into the details of these mechanics further below, it’s important to point out that the core of the gameplay is still the same, so you don’t have to worry about learning a whole new set of rules and a completely different gameplay procedure. If you’re a fan of Baccarat, then you’ll be able to jump right in and enjoy your play.

The rules for the Lightning Baccarat live dealer tables aren’t incredibly complicated, but there is a little bit to learn before you can fully understand what’s going on. In what follows, we’ll break down the gameplay procedure, how point totals are calculated and what the payouts look like for different types of wins.

The procedure for this game is similar to other forms of Baccarat, but it has its own differences that can throw you off a little when you first play if you aren’t expected it. We’ll give a quick break down of how each hand goes here and then go more detailed as we go along.

Once you understand this procedure, you can hop into looking at how point totals and winnings are calculated.

The way that hands are scored in this game is fairly straightforward but can be confusing at first if you mistakenly think that it’s the same as blackjack. The game looks a lot like blackjack, so it’s an easy misconception to have.

Here’s a quick overview of how the points work:

What’s important to note is that the score of each hand is based only on the “ones” digit of the total. For example, if you have a total of 17 on the player hand, that scores as a 7 instead of a 17.

There are some new rules added to Lightning Baccarat that you won’t find in other variations of the game, and these have to do with the Lightning Cards and how they affect the payouts. We’re going to break up wagers into two groups here to show how the payouts are affected.

The base payouts for the player and banker wagers are the same as standard blackjack provided that there are no lightning cards involved.

This happens because the banker hand actually has a better chance of winning than the player hand because of the rules on how each side can get another card.

From there, if you have a Lightning Card in a winning hand for either of these bets, then you’ll get the associated multiplier applied to your win. In essence, you’ll simply multiply your bet by the value shown above the given Lightning Card in the bottom-left corner of the screen to the left of where your bets are shown for the hand.

Without any Lighting Cards involved, the pair bet for either hand (player hand pair or banker hand pair) will pay 11:1. However, if you do get at least one Lightning Card in that hand, then instead of the multiplier being multiplied by 11, it’ll be multiplied by 9 instead. With a 5x multiplier, for example, your win won’t be 55x, but it’ll be 45x instead.

With the tie bet, things are a little more complicated because four total cards are involved. That means you can get up to four Lightning Cards that are all multiplied together, which leads to a few things you need to know.

That makes the tie wager more interesting than the trap bet that it usually is, and the same kind of thing happens with the pair wagers to different extents.

The overall best strategy here is to take your pick between the player and banker bets while generally leaving the pair and tie bets alone. While the volatility is lower on these two wagers, they have a higher payout rate than the tie or pair.

However, if you really want chances for a real life-changing sum of money, then the tie bet can scratch that itch, which is something that you don’t always find in a table game, particularly without some kind of progressive tied in.

The pair bet is pretty useless, however. It doesn’t have the higher chances of winning huge payouts like the tie bet, but it has a higher house edge than the banker or pair bets, so it’s not a particularly good wager either way.

It’s easy to understand why a lot of players consider Evolution Gaming’s Lightning Baccarat live game to be the best live dealer Baccarat game running online. The Lightning Card game mechanic adds a lot of action and makes the tie bet more viable than we’ve ever seen it before.

Which online casinos have Lightning Baccarat?