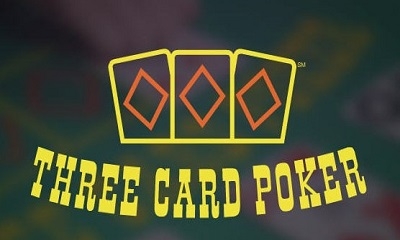 Live dealer Three Card Poker tables give you a chance to play against the house in a game of luck and skill. It’s not as complicated as many other casino poker games, which appeals to many players. However, there’s a lot of action with multiple ways to play and some important elements of strategy.

With so many variations of casino poker out there, on top of the regular versions of poker, it can seem a bit intimidating to get in on the action with some of them. However, live Three Card Poker is a bit different because it’s a straightforward title with less complication.

One of the main appeals of this game is that it’s not bogged down in tons of strategic detail.

Unlike games like Caribbean Stud or Pai Gow Poker, you can learn how to play Three Card Poker pretty quickly. On top of that, when you play within the live dealer environment, it’s even more fun. With the added social interaction and the excitement of winning together and others, it’s easy to see how having other people to interact with really drives home a better type of experience compared to playing alone. This is why we believe that the live dealer versions of this game are by far the best way to play.

Before we get into the details of how this game is played, we have an important point to drive home. A lot of players will be familiar with poker hands from normal, five-card games. However, the hand rankings for poker with three cards is a bit different. It has most of the same hands, but some of them are in a different order.

Consider the following, from strongest to weakest:

The rules of live Three Card Poker are fairly easy to learn, but there is some degree of nuance. Overall, there are two main ways to play, and you can actually play them both simultaneously. In what follows, we’ll show how this game works and what you need to know about the payouts.

Progression of a Hand

A timer will appear to show you how long you have to place your bets in this game. Once that runs out, the dealer will declare no more bets, and the current hand will be dealt.

You first decide on your bets. You can place an ante, or you can place a Pairplus side bet. Playing both is also an option.

The progression of the ante bet goes as follows:

The process of playing a hand of this game doesn’t take very long. However, the ante and Pairplus bets are figured separately, and that can take just a moment. In the live dealer environment with all players sharing a hand, it usually goes very quickly.

If the dealer qualifies, and you manage to pull out the better hand, then your ante wager will win. However, it can win at different rates depending on the hands that you used to win. The payouts available are as follows:

These are essentially bonus payouts for the best possible hands that you can hit. However, since they are such sizable wins, they’re worth a lot in the long run.

One of the things that makes live dealer Three Card Poker so exciting is all of the side bets. The Pairplus is always available, but others may or may not be available just depending on which software provider or online casino you’re playing with.

The Pairplus bet is essentially a simple side bet based on the value of your three cards. Whether the dealer qualifies and whether you actually win the hand are actually irrelevant here. This means that you’ll get paid even if the dealer doesn’t qualify or even if you lose to a better hand.

Instead, you simply look at the three cards you have been dealt. If you make one of the following hands, then you’ll receive a payout as a multiple of your bet size.

Note that high card hands do not get a payout from the Pairplus wager. This is even if you were to win the hand otherwise.

The most popular optional side bet that’s not always available is the 6 Card Bonus. This wager takes into consideration your three cards combined with the dealer’s three cards. From those six cards, the best five-card poker hand is determined. The value of that hand, based on five-card poker hands and not three-card ones, will determine your payout.

You can win the following prizes:

You need at least three of a kind with this side bet at the live Three Card Poker tables. The reason for this is that it’s easier to make better hands with six cards to choose from instead of five. While we think something that took advantage of there being six cards would be cool, like a hand for five of a kind or three pair, this version works out well too.

How to Win at Live Three Card Poker

Strategy for poker games like this are known for sometimes being extremely complicated. That’s not the case with Three Card Poker, however. You really only need to remember one piece of information to play the ante bet option to raise or fold completely perfectly.

However, if the best card in your hand is a Q, here’s an easy way to remember what to do. Imagine your two remaining cards form a number such that the first digit is higher than the second number. For example, with Q-9-4, the number would be 94, and with 2-Q-6, the number would be 62. If that two-digit number is 64 or higher, then you raise.

Live dealer Three Card Poker is a good mix between strategy and luck. With the available side bets, you can bring in more action as well, and that’s the kind of thing that most players enjoy. Even if side bets aren’t your thing, having them available is better than not. That’s especially true here since they don’t slow the game down.

Overall, if you like poker-based games but don’t care for overly complicated levels of strategy, then this is a solid pick.