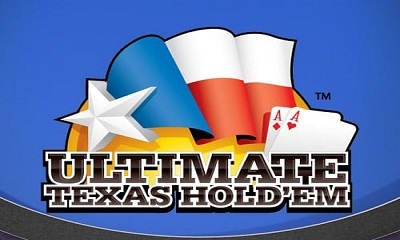 Live dealer Ultimate Texas Hold’em offers players a more strategic version of casino hold’em than most others. Offered exclusively by Evolution Gaming thanks to a licensing deal, Bally Gaming is actually the company that holds the rights to this title. In any event, it offers a whole lot of poker action.

Live Ultimate Texas Hold’em solves one of the issues that you see with other hold’em-related casino games. Namely, it solves the issue of not having multiple betting options. That adds a lot of layers of complexity and strategy to the game.

With that said, it’s still a fairly simple title to learn to play once you’ve seen a few hands.

Evolution Gaming was able to get the presentation of this game perfect. The social atmosphere combined with getting generous amounts of time to make your decisions puts players in a position where the experience just flows properly. Along with that, it looks great overall from an aesthetic point of view.

The gameplay for this title is pretty fun as well, even if you aren’t big on learning a lot of strategy. However, your payout rates will suffer if you don’t know a pretty solid strategy for this game in general. With that said, learning a few tips and going from there will keep your payout rate pretty reasonable.

There are a few things that you need to know in order to play this game. We’re going to go overall of it here and show how things are presented in the live dealer format. While it’s mostly the same as the traditional online version, there are some differences of note.

The first thing to know about live dealer Ultimate Texas Hold’em poker is that it’s based on five-card poker hands. This is anti-intuitive if you aren’t familiar with it because you actually create your hand from seven cards. We’ll get into how that works below, but first, let’s review the poker hand rankings. Here they are from strongest to weakest:

You get two cards face-down called the pocket cards or hole cards. You’ll also have five cards face-up called the community cards. You get to choose the five cards from those seven that will give you the best hand on this list of rankings. The dealer does the same, and the hands are compared to see who wins accordingly.

The procedure for playing a hand of this game is slightly more complicated than other similar titles. However, we’ll walk through the basic gameplay procedure in what follows to show you how it all comes together:

That covers a single hand of play.

For the dealer to “open” at the live dealer Ultimate Texas Hold’em tables, the dealer needs to make at least one pair, and that means that high card hands do not open for the dealer. Opening is a poker term that is sort of like qualifying in other similar titles.

If the dealer doesn’t open, the ante bet is always a push for the player. This is regardless of if the player wins or loses.

However, the payouts aren’t always the same, and some of them depend on your hand. With that said, here’s a quick overview of the different conditions and possibilities for the final result:

This can seem a little complicated when you start. However, after you see the results of a few hands, it becomes pretty intuitive very quickly.

Value of the Payouts

Both the ante wagers and the play wagers will pay out even money at 1:1 if you win. However, the blind bet can give some different payouts if you win depending on your hand. The following breaks down the blind payouts:

Now here’s where things get interesting. If you win with a hand that’s three of a kind or worse, the blind bet is simply returned to you. What this does is it adds an element of strategy based on your likely hand values.

Note also that you have to win to get these payouts. If you lose with a full house, you will not receive a 3x win on the blind bet, for example.

How to Win at Live Ultimate Texas Hold’em

Strategy for this game is complicated. You have to decide whether to raise in a few different potential situations based on your cards. You also have to consider the community cards. This is a complicated game with a lot to work out.

However, without going into copious detail and a lot of mathematics, there are some basic principles you can follow. Before the flop, you should only raise with high cards in general or pairs of three and up. Don’t raise with just a pair of twos.

On the flop, make the 2x raise if you have two pair or above. You can also raise good draws or non-two pairs where one card is in your pocket cards.

Live dealer Ultimate Texas Hold’em poker gives players a good mix between fun and complexity. While the strategies do run deep, you still have plenty of options to get in on the action if you aren’t a super serious player. That’s exactly the kind of game that gets and keeps the level of popularity that it has. As a result, it’s one of the most popular live dealer games out there.