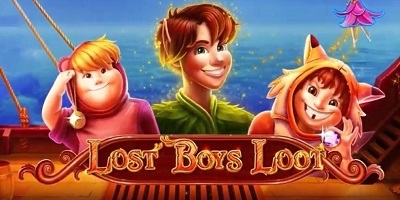 The Lost Boys Loot online slot by iSoftBet centers around a Peter Pan theme and has all of the main characters that are known from the story. This title is jam-packed with bonus features including wild features and free spins that combine to give players tremendous opportunities to take down some serious wins.

An Introduction to Lost Boys Loot

The story of Peter Pan is one that has been told in several forms of media from television shows to movies, video games, books and other ways. iSoftBet has brought the story alive with their Lost Boys Loot video slot, and they’ve put their own spin on this classic tale.

You’ll find yourself on Captain Hook’s ship out on the water as you play on the reels, which gives the title a tremendous look and visual appeal.

All of the Lost Boys and several other key characters and motifs have been brought to life with high-quality graphics on the reels.

With that said, the gameplay side of things has been handled really well by iSoftBet as well, and you can see some pretty tremendous ways to win that come as a result of these features combining and boosting the value of each other in various ways.

iSoftBet is known for making their betting schemes pretty easy to understand and really intuitive in all of their games, and that’s what you’ll get here as well. Here’s what to expect:

We want to point out two other things. First, the volatility of this game is in the medium-low range, so you don’t have to worry about the swings being bad at all. Second, all of the wins that we describe here are multiples of the payline wagers instead of the entire bet size, and we say that to keep things clear on what the actual relative prizes are like.

In the Lost Boys Loot online slot, there are a variety of features that come together to give players a lot of different ways to get paid. Here we’ll break down everything that you need to know before you get started playing.

Tick-Tock is the crocodile in this game that is always hunting Captain Hook. If the Captain Hook wild shows up on the game board on the same spin that Tick-Tock is seen swimming under the reels, then you’ll get the benefit of Hook’s bad luck.

The crocodile will jump up to grab at Hook and turn every symbol under him wild on the same reel.

This is essentially a random chance to get a downwardly expanding wild symbol, which gives more chances to win than what you would otherwise normally have.

Another random feature centers around Tinkerbell. At random, Tink can show up and magically add between three and five extra wilds to the reels. While these wilds are different because they have her face on them, they function normally like all other wilds in this game and help you to get all kinds of extra winning combinations.

The Peter Pan symbol in the Lost Boys Loot online slot is a bonus symbol. He makes an appearance on all five reels, and here’s what he’ll give you for three or more:

Getting up to 30 free spins at once is obviously a pretty big deal, but there’s more as far as this bonus feature goes.

During this feature, you can have both Peter Pan and Captain Hook land on the reels at the same time to start a duel. The end result will either be an increased multiplier to all of your wins for the remainder of the feature or additional free spins added to your total. There is no maximum number of duels that can happen during this free spins bonus round.

Another way to get free spins is to have the third reel land completely full of Captain Hook wild symbols. When you do this, you’ll see a giant ship’s wheel come up, and you’ll have an opportunity to pick up five, eight, ten or twelve free spins for this feature.

When you play with these free spins, the wilds will stay in place as sticky wilds on the third reel. Hook will be able to trap other symbols in place to help you get extra winning combinations that you would have missed out on otherwise, and this is a really cool way that the feature adds value over the regular spins.

The treasure chest bonus symbol can land anywhere on the game board to trigger the Lost Boys Bonus Feature. This feature has three chests appear, and you’ll pick one of them to show your prize. You can win either of the free spins bonus rounds, or you can pick up an instant cash win that’s based on a multiple of your overall bet size.

How to Win at Lost Boys Loot

All you really need to do to boost your chances of winning at this game is to use a bet size that fits what you’re comfortable with and play long enough sessions to get a fair shot at picking up the free spins bonus features. These are where the real value is found in this game, particularly with the multipliers and other goodies.

Aside from that, there’s nothing in particular that you should do differently compared to how you might play any other online slot in the general sense.

There are three other Lost Boy son the reels that have solid payouts. They are easiest to identify based on their color, so the red pays 500x for five, the purple will get you 300x for five of a kind combinations, and you can make it 200x for five of the green.

For the mid-level pays, the clock and the treasure map both get you 150x for five of a kind of either.

iSoftBet definitely did a great job with the Lost Boys Loot video slot between the great graphics and high-level gameplay that they put into it. We really like the multiple free spins modes and the random features that give extra value here and there in ways that you don’t see coming. Overall, it’s an action-oriented game with a volatility that’s not too high, so it’s something that a really wide range of players can enjoy.