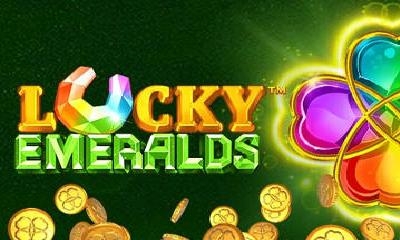 The Lucky Emeralds video slot produced by Playtech gives players a tremendous amount of action with a simplistic style of play that focuses on getting a whole lot of wilds. It’s a fast-paced experience that gives players a good value frequently instead of holding out for rare bonus features that hardly ever trigger.

An Introduction to Lucky Emeralds

The online slots industry is completely full of games that have the same general type of gameplay. In those titles, you’ll basically play at a slight loss until you hit a rare bonus feature that has a chance to give you a pretty sizable win. Playtech threw this style of play completely out the window with their Lucky Emeralds online slot and went with something a bit more fast-paced and exciting.

The main feature for this game hits pretty often, and you’ll definitely see it several times over even within the length of a fairly short sessions of three to four minutes.

This is a style of play that appeals to people who are tired of waiting around for sessions at a time without ever hitting the main feature that a game has to offer.

On the graphical side, this title looks solid. The aesthetics aren’t the main focal point, so they’re not up there with the best in the industry, but they’re definitely strong enough to hold their own when the overall gameplay is considered.

The format for this slot is really straightforward. It appears that Playtech wanted players to be able to jump right in without having to worry about configuring a lot of different things. Here’s what to expect:

Because of the way that this game’s layout and the betting controls are set up, it’s really easy to hop right on, select a wager size and start playing without having to worry about anything else.

It is worth noting that the volatility for this game is in the medium-low range. It’s not incredibly low, but it’s not very strong either. Aside from that, all wins will be discussed as multiple of the line bet wager, so you can divide these numbers by 10 to see what the payouts would be like as a multiple of the whole bet size.

The feature set of the Lucky Emeralds online slot is really straightforward, just like the rest of this game. Playtech wanted players to be able to enjoy a value-oriented style of play without having to worry about much else, and that’s exactly what you get.

The clover wild symbols are the most important symbol in this game, and they’re what a lot of the gameplay centers around. Wild symbols are a given for most slots to the point that players usually take them for granted, but that’s not going to be the case here once you see how they work.

Here are the payouts for these wilds:

To put these wins in perspective, five of a kind is worth the same as 50 times your total bet size, and two wilds on a line gets you the equivalent of 1x your bet size.

There are a few things to note here. First of all, you can win with just two of a kind of these wilds, which increases the hit-rate and makes it easier to pick up smaller winning combinations.

Second, each individual payline is evaluated to give you the single best payout possible for that particular line. This means that if you have two of a kind of wilds, but they could be used to make a longer combination that would pay out a better prize by substituting for some other symbol, then you’ll always get that larger prize instead. This avoids situations where you get a smaller win than what’s actually available simply because the game offers wild combination wins.

Finally, these payouts are pretty strong, but they’re stronger than they look on top of that because of the way the feature set works and the resulting fact that you’re likely to get several payouts for the wilds if you get any at all. We’ll get more into this below.

You’ll notice smaller clovers over the top of the five reels in the Lucky Emeralds video slot. These are tied to the Clover Fall Feature, which is the key feature for the game. These smaller symbols will rotate one space to the right after each spin, and there can be between one and three of them in a position at a time.

When you get any number of wilds on the game board in any position, you will trigger the Clover Fall Feature.

When this feature activates, wilds will be added to the reels. Each reel will get the number of wilds shown above it (if any) with the smaller clover symbols when this feature is activated. This means that you can get a ton of wilds on the game board all at once, and you don’t need us to tell you how much value that can mean.

What we really like about this feature is that it triggers so often while still providing chances for some pretty tremendous payouts. Note that the wilds can appear on the reels normally, and they can also show up with this feature. Both count the same for wild combination payouts.

How to Win at Lucky Emeralds

The Lucky Emeralds online slot has a medium to medium-low volatility, and a lot of that comes from the value packed into the feature we described above. The regular pay table has a pretty solid hit-rate, and that keeps the volatility from getting out of line.

Our recommendation for betting strategy in this game is to go with a bet size that’s about average for what you’re comfortable with. There’s no reason to really make any kind of serious adjustment here since the volatility isn’t high enough or low enough to justify it.

The wilds have good pays, but they aren’t the only symbols with nice payouts in this game. The diamond-shaped green emerald gets you 500x for five, and you can earn 250x for five of the golden horseshoe. The golden flower gem symbol also pays out 100x for five. All three of these symbols, much like the wild clover symbol, pay for two of a kind or more. The rest of the symbols require at least three for a payout.

Mid-tier gem symbols can be found in purple, red and blue. They pay 75x, 45x and 45x for five of a kind, respectively. At the lower tier, you get gems of the same three colors with a smaller size, and they each pay 15x for five of a kind combinations.

Playtech did something that’s really fun with their Lucky Emeralds online slot. We can’t complain at all about anything that this title has to offer. While the graphics aren’t top-tier, they aren’t bad by any stretch of the imagination, and the gameplay that centers around the wild feature drives the experience in a particularly action-oriented way.

Which online casinos have Lucky Emeralds?