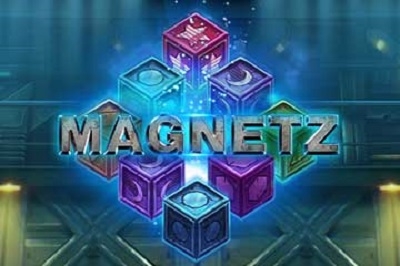 With the Magnetz online slot by Relax Gaming, players get to see magnetic power in action with an atypical layout and fun features that make sense in the context of how the game is set up. With a futuristic, almost dystopian look and fast-paced gameplay, this is a title you won’t want to miss.

One of the things we often hear from players is that they wished there were more games with new formats, and Relax Gaming has definitely answered that call with the Magnetz video slot. This title has a much different setup than most, but it’s intuitive enough that you’ll understand what’s going on pretty quickly.

This avoids the trap of being so far outside of the box that players don’t feel like they can enjoy what’s being offered.

The gameplay is cluster-based, but it’s handled differently than what you see in most cluster-based titles. The feature set also promotes a lot of action, which is something that virtually all players can obviously get behind.

From a visual standpoint, you’ll have a really interesting look here that feels like something out of a dystopian sci-fi movie. That’s a tone that isn’t really used in that many slots, and the use of it here is very much welcomed for adding to the overall atmosphere.

The layout being pretty different is the first thing that most players are going to notice in this game. With that said, here’s what to expect:

The volatility of this game is on the lower end of the scale because of two things. First, the hit-rate is pretty high with it feeling pretty rare to go more than a few turns without some kind of win being hit. Second, the feature set offers a good amount of value without it being overwhelming, and the re-spin feature hits often as well.

The feature set for the Magnetz online slot centers around using the atypical format in a very intelligent and clever way. You’ll find that there are some fun features that add value but that the regular pay able hits pretty often as well.

Wild symbols appear as stone W’s, and they can sometimes have multipliers attached to them. You’ll see a multiplier denoted by a number ranging from x2 to x5 in the bottom right corner of the wild symbol itself. These multiply any win that uses at least one wild by the given number. Multiple wilds in the same cluster will have their multiplier values multiplied to give you opportunities for some pretty tremendous wins.

These symbols do not have their own payouts because of the cluster setup, but they do help you to get a lot of extra wins and larger payouts than you would have picked up otherwise.

The way this works is that the triggering cluster(s) along with all four magnet symbols stay in place, but all other symbols disappear. New symbols come into place to fill out all four of the 3×4 gameplay areas. If you get new symbols that add to the triggering winning combinations, then the process continues, but you get paid for all other wins as well.

This allows you to get several wins on the same paid spin while also giving you larger payouts on the triggering combinations and clusters.

When you have two magnet symbols beside of each other that match, you’ve activated the Magnetic Merge Feature. The way this works is that they become connected and can make winning clusters that are connected from the left and right sides of the game board.

This is how you get the largest cluster payouts available in the game, but it also helps you to more easily trigger the Flux Re-spin Feature because you only need three more matching symbols to trigger the re-spins when this happens.

The free spins bonus round in the Magnetz video slot is triggered in accordance to the five golden bonus symbols that can appear anywhere on the game board. When you get all five of them on a given spin, including across the re-spin feature, then you trigger a set of five free spins.

How to Win at Magnetz

The structure of this game is all about giving players a high hit-rate and a low volatility. In games with this type of setup, the most common adjustment that strategic players make is choosing a bet size that’s a little higher than what they’d normally go with on average.

There are two reasons for this. First, it increases the amount that you get paid when you hit winning combinations and features. With the features being able to compound your winnings, this isn’t something to be taken lightly. Second, because the volatility is so much on the lower end of things, you also don’t have to worry that much about big swings getting out of hand even if you increase your bet size.

To do this the most effectively, something in the range of 30 to 60 percent of an increase in your bet size is the most common range used.

There are six different paying symbols in this game. The red start gets 200x for 20, and you can pick up 100x for 20 of the purple hexagon. The orange diamonds pay 70x for 20 as well.

At the lower end, there’s a yellow triangle, a purple moon and a blue circle. All three pay out 15x for winning combinations of 20 or more.

The presentation and visual tone of this game gives a lively tone that’s definitely comparable with much that the online slots industry as a whole has going on. In addition to that, due to the fact that this title gives a serious level of quality while still standing out individually, this video slot fits really well in this developer’s offering of slots overall.

If you’ve been a fan of other games that use this type of concept, then this is a title you will not want to miss playing, and if fun is exactly what you’re seeking out, then you’ll 100 percent love the gameplay style that this title brings to your sessions. Also worth noting, the range of features includes a number of different additional ways to get paid in addition to the typical pay table offering.