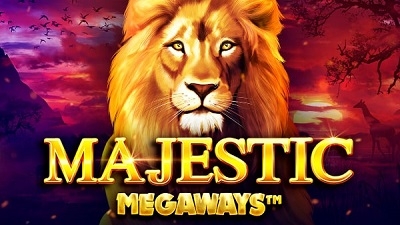 The Majestic Megaways online slot by iSoftBet takes players on an African safari with thousands of ways to win on each spin. Mystery symbols, free spins and other value-packed features make this game incredibly exciting while giving you multiple ways to win some serious payouts.

An Introduction to Majestic Megaways

The format of online slots is something that can be played with a bit to give players something fresh and new to try, but if you go too far outside of the box, then it’s just alienating and aggravating to try to learn.

The Majestic Megaways video slot avoids this issue by giving players an innovative gameplay style within a format that’s different enough to be exciting but normal enough to not be difficult to jump right into.

We’ll get into the details of how this format works, but on the gameplay side, you’ll have a lot of features that are both random and not. This leads to a high level of action with a high hit-rate thanks to the thousands of ways to win on each turn.

Visually, this game is solid but is obviously somewhat limited by the concept that the slot is based on. That’s something that most players won’t be bothered by, however, iSoftBet obviously made this title all about the gameplay, features and high hit-rate action.

The format of this game uses the “Megaways” layout, which is used by a few different software providers under a license. We’ll show you what this means and what to expect in the following:

All of the wins in this game are based on a multiple of your overall total bet size. If you want to know what it would be like based on coin size, you can multiply the given amounts by a factor of 20.

The hit-rate of this title is really high because of the Megaways format. This leads to a fairly low volatility, which means you won’t have to worry about swings being too severe in most cases.

The format of the Majestic Megaways online slot is obviously a big part of the story here, but there are other features that add to it and work with that format that really take it to the next level. We’ll cover those here and show you why they are important.

There’s a wild symbol that shows a tree growing in front of a sunset. This is a beautiful symbol that only appears on the horizontal reel up above the game board, so it can only make an appearance on the second, third, fourth and fifth reels.

The key to understanding why this symbol is so limited is in the Megaways format. If the wild appeared normally, it would be entirely too overpowered in terms of the value it gives. Note that since it doesn’t appear on all reels, it does not have its own payouts.

After each spin with any kind of win, your pays will be awarded to you normally. From there, the Majestic Megaways video slot will then make the winning symbols explode to allow new symbols to fall into place.

This gives you another chance to win, have explosions and repeat the process. This continues until no new wins are available.

The moon symbols can show up on each reel, including the horizontal reel above the game board, and they are the mystery symbol in this game.

At the end of each spin, a random symbol is determined for the mystery symbols, and each mystery symbol will turn into the same randomly chosen symbol as a result.

This feature does something really interesting in terms of putting more matching symbols on the reels than you would otherwise get. With the Megaways format in play, this is very meaningful since they only have to be on adjacent reels to give payouts and not on particular paylines.

There are blue diamond scatters that appear on the game board, and if you get at least four of them, then you will get 12 free spins. Every one that you get on top of that will give you an additional five free spins, and that can add up to a total of 27.

Likewise, you can add more free spins during the bonus round by picking up more bonus diamond symbols.

It’s worth noting that you can force the free spins mode with the Majestic Bet button on the left-hand side of the reels, but this will cost you 75x your total wager. We don’t believe that this is worth the cost, but it’s there if you decide otherwise.

How to Win at Majestic Megaways

There’s not much that’s special that you need to do when playing this game. We recommend staying away from the option to purchase the free spins and sticking with a bet size at or slightly above what you would normally use on average. The high hit-rate will protect you from any significant swings most of the time, but you don’t want to choose a wager that’s particularly large compared to your average.

The lion symbol is special in that it only requires two of a kind for a payout. You can win 50x for six of a kind as well. With the other symbols, you need at least three for a winning combination.

From there, there are three other animal symbols. The elephant gives you 7.5x for six, and six of either the rhino or wildebeast gets you 2x.

At the lower end oft he pay table, we have the purple A and red K symbols. Each of these pay 1.75x for six of a kind. Six of the blue Q or green J gets you 1x, and you can win 0.9x for six of the orange 10. The lowest paying symbol is the yellow 9, which awards players 0.8x for six of a kind.

What we want players to really understand about the Majestic Megaways video slot is that it brings an overwhelming amount of action. The hit-rate is very serious, and the ability to win several payouts on the same turn is tremendous.

This happens in a variety of ways between the cascading wins and the mystery symbols and wilds, and it all comes together to mean a whole lot of action for players. If you’re the type of person who likes a lot of ways to win on every single spin on top of increased value in a bonus round (free spins with cascade multipliers in this case), then you may find that this title is a perfect fit for you.