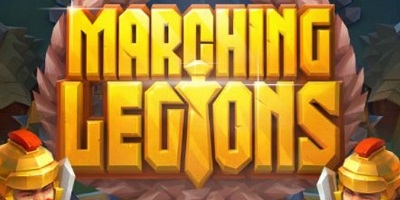 The Marching Legions online slot produced by Relax Gaming puts a completely different spin on the 243 ways format by incorporating stacked symbol features that are a part of the main game and free spins mode. This forces opportunities to get extra payouts with the top-paying symbols in the slot.

An Introduction to Marching Legions

In the online slot space, there are certain formats that get a lot of attention. The 243 ways format is one of those, but they almost always have more or less the same basic set of features attached.

Relax Gaming has really gotten away from this pattern with their Marching Legions video slot and its resulting features.

Right out of the gate, this is a title that looks tremendous. It has an isometric style of 3-D graphics that are cute and look like they’re straight out of some type of popular mobile war strategy game.

Aside from that, the gameplay centers around a high degree of action and strong wins that come straight from the regular pay table. In fact, the feature set is fresh and completely different than anything we’ve seen before, and the regular pay table gets a ton of attention here with a particularly high hit-rate and some smart symbol collection mechanics.

The format of this title is actually pretty common. It’s what they did with the format that’s so atypical. Here’s what you can expect:

We also need to point out that the volatility of this game is particularly low. It’s largely due to the way the regular pay table gets so much attention inside of a title with a format that lends itself to a whole lot of small and medium wins. The main bonus feature is also set up in a way that it hits a bit more regularly than most, so that smooths out any swings you might run into quite a bit over time as well.

The feature set for the Marching Legions video slot is really easy to understand because it’s all based around one core idea and different variations of it. We’ll show you what you can expect in what follows.

First off, we need to point out that the Legionary symbol is the little soldier facing down and toward the player’s left in a golden helmet with a sword and a red shield. He gives the following wins:

These are not wilds, but they do pay well, and they have some of the best (but not the absolute best) wins int he game. Moreover, they have a very flat pay structure compared to other symbols where there isn’t much of a drop from five to four, four to three or three to two of a kind wins.

This is the most important symbol in the game because this little guy and the fact that he always shows up stacked is the centerpiece of the feature set.

During this feature, the stack of legionaries will shift one spot to the left before each respin begins.

More stacks of the same symbol will come along for the ride and extend the feature. The feature is over once no more reels full of legionary symbols are left showing.

The key thing to understand about this feature is that you don’t have to pay for the respins, so it’s basically free chances to get lots of legionary payouts. Since they always show up stacked, that creates a whole lot of extra value that you would have missed out on otherwise.

It’s possible to get only part of a stack of legionary symbols on the reels at once instead of having the whole reel full. If this happens on two different reels at once on the same spin, then you have a chance to trigger the Legionary Nudge Feature.

This feature works by triggering at random and pulling those stacks completely onto the reels when activated. If that happens, the above Marching Respins Feature is automatically triggered as well, so this nudge feature is definitely worth keeping an eye on.

The free spins mode for the Marching Legions video slot is triggered based on the number of times you get stacks of the legionary symbol on the reels. You’ll see a counter in the top-left corner, and when you get a stack of that symbol, the counter will increase by one.

When you get that meter to five, it’ll trigger the free spins mode at the average level that you used to get those five spots on the meter.

This free spins mode is based on waves. The first wave has one stack on the rightmost reel, and then an additional stack is added for each wave you get past. You can actually fill up all 15 spots in this way if you get to the fifth wave, so there are some chances for some pretty tremendous payouts here.

How to Win at Marching Legions

The main thing to understand is that the hit-rate is really high and the volatility is really low for the Marching Legions online slot. As a result, you do have a strategic option for changing things up a bit if you’re so inclined.

That option is to slightly increase your bet size and to play at your normal speed. The reason this is effective is that you’ll get bigger payouts when you hit sizable wins, but your average swings will still be pretty low, so you don’t have to worry so much about one bad run of luck wiping out a substantial part of your balance (which is the entire point of using specific bet sizes in the first place).

The three rune symbols come in red, blue and yellow. The red is a building that pays 1.2x for five of a kind combinations. Five of the blue bird or yellow head pay 1x for either. With so few symbols, the hit-rate is pretty tremendous on this all-ways, 243 ways to win slot.

There’s no denying that Relax Gaming has really brought together a lot for players to get excited about with as strong as the hit-rate is for the Marching Legions video slot. The feature set is really cool with the stacked symbols being at the center of everything as well. If you’re like a lot of action and a ton of small and medium wins with decent chances for larger payouts, then this is a title to pay attention to.